As far back as he can remember, John Rose loved the sound of the pipe organ and knew it was the instrument he wanted to play. He recalls intently watching his church organist and listening to her play the postlude. At age 12, when his legs could finally reach the pedals, he began taking lessons from her, putting him on a path that propelled him to his status as a world-renowned organist and to his successful, four-decade career teaching generations of Trinity College students and performing at campus events and services. 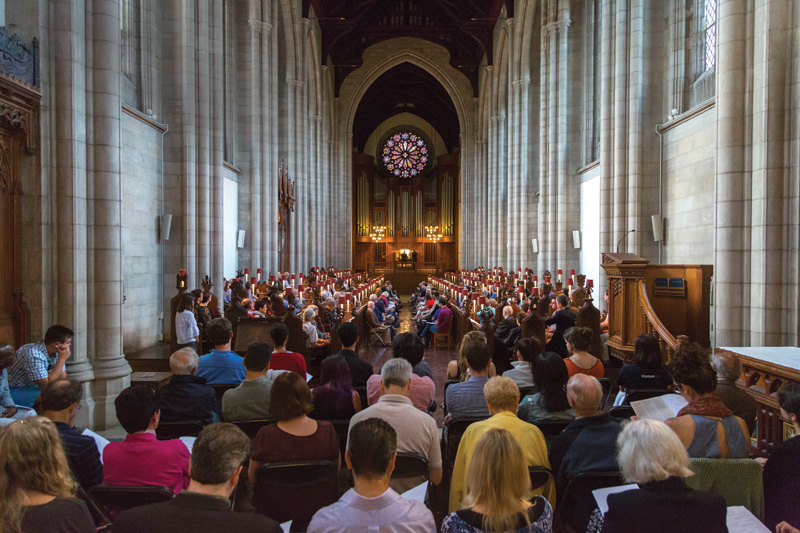 Less than two months ago, on December 31, 2017, Rose retired from Trinity. After serving as director of Chapel music for 40 years, he says, it was the right time to leave the job he loved.

“There is no question that I will miss the wonderful day-to-day activities at the Chapel,” Rose says. “Forty years is a wonderful stretch. It’s time for someone else to come in and continue the traditions and to create some new ones.”

Rose was a music major at Rutgers University, where he also was an organ teacher. At 20, he became organist at the Cathedral Basilica of Sacred Heart in Newark, New Jersey, and served there for almost nine years. In 1977, Trinity hired Rose as college organist and director of Chapel music.

Rose says he will especially miss his students and colleagues. “When you work with students to create beautiful music together, it requires work and commitment. You develop a respect for each other that leads to long-term friendships,” he says. “The most incredible blessing is the people with whom I work, including Chaplain Allison Read, who is amazing and wonderful.”

Read, college chaplain and dean of spiritual and religious life, worked with Rose for 10 years, preparing and leading worship services and other occasions in the Chapel.

“John is committed to the college, to our students, and to our alumni and friends,” says Read. “He offered guests beautiful, sacred music, and he’s simply full of grace. He maintains relationships and creates community. It’s an extraordinary gift to know him and to call him my colleague and friend. As President Berger-Sweeney has said, John Rose is a true Trinity treasure.”

During his time at Trinity, Rose oversaw the music for major college events, including presidential inaugurations and each year’s Reunion, Matriculation, Convocation, and Commencement; for weekly Chapel services; and for memorial services, weddings, and baptisms. He also curated the Trinity College Organ Series, made 16 LP or CD recordings, mentored Trinity students, directed the Trinity College Choir, and advised The Accidentals and The African Choir.

In 2016, he was named the first John Rose College Organist-and-Directorship Distinguished Chair of Chapel Music, a position endowed in his honor by the estate of the late Marjorie Van Eenam Butcher, professor of mathematics, emeritus, who was Trinity’s first female faculty member.

Rose’s retirement, however, did not mean severing ties with Trinity. He says he is devoted to continuing his support of the Chapel and to attending its events. He also will continue practicing on the beloved Austin pipe organ. 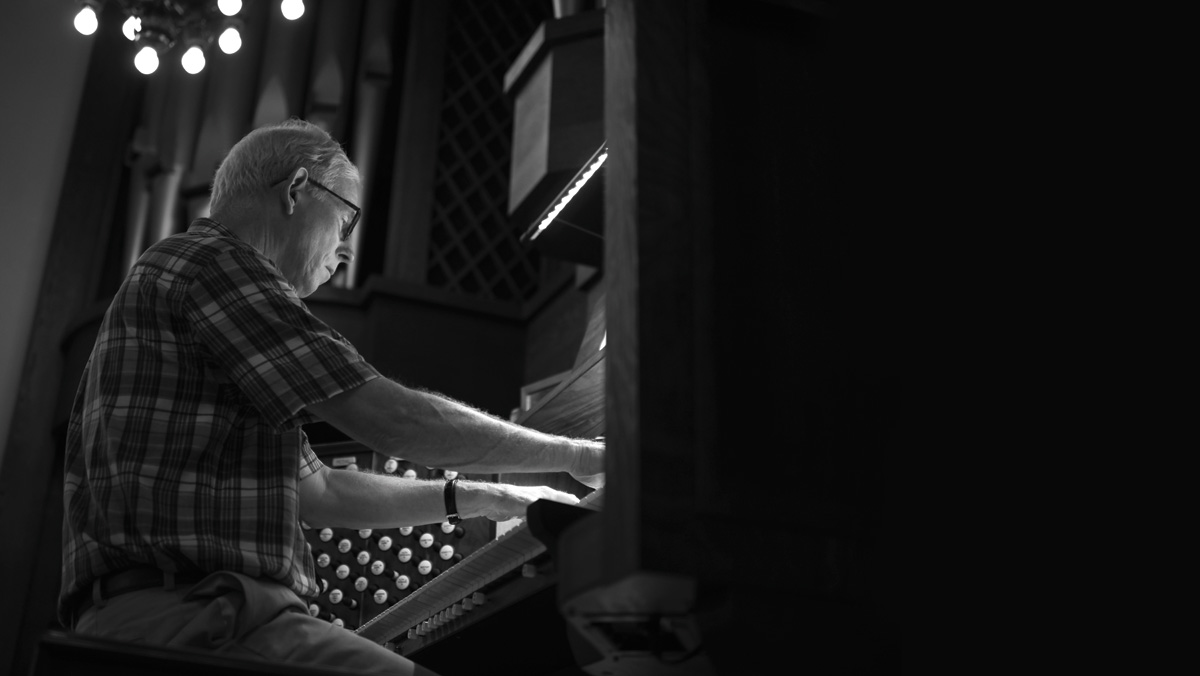 “The instrument becomes a part of your personality,” says Rose. “It would be difficult not to hear or see it again because music expresses things beyond words. This is an exceptionally beautiful organ. As long as I am able, I will play it.”

He emphasizes, though, that he will practice only when it is convenient for his successor and protégé, Christopher Houlihan ’09, a celebrated organist in his own right. For the last four years, Houlihan has been an artist-in-residence at Trinity.

“I am proud and honored to have this exciting opportunity to be John’s successor,” says Houlihan. “It’s also very humbling. Trinity College, the Chapel, and John have been pivotal elements of my life. It’s surreal in many ways.”

Trinity was not the first place their paths crossed. Many years ago, Houlihan attended an organ recital in Springfield, Massachusetts, where Rose was performing. It was the first time Houlihan heard concert organ music, and he quickly knew that he wanted to learn to play. At age 12—the same age as Rose when he had started playing—Houlihan began taking lessons from Rose and continued throughout middle school, high school, and, ultimately, while a student at Trinity. After Houlihan graduated from Trinity, he went on to earn a master’s in organ performance from The Juilliard School. While still a graduate student, he began his career as a concert organist, traveling around the country playing recitals that garnered rave reviews. Houlihan’s travels will continue as part of his new role at the college.

“John has been a part of this place for 40 years. For many alumni, he is a large part of their memories of the Chapel and the college,” says Houlihan. “His many accomplishments, especially his work with The Chapel Singers, his performances in this building, and the relationships he has nurtured with students, alumni, faculty and staff, and the community are amazing to me. I hope I can live up to the legacy that he has established.”

Former Chapel Singers member Sidnie White Crawford ’81 is Willa Cather Professor of Classics and Religious Studies at the University of Nebraska-Lincoln. She says she met Rose on her first day at the college.

“It also was his first day at Trinity, and I was his first student,” says Crawford, noting that working with a music teacher in private lessons is different from working with someone in the classroom. “John and I met once a week for an hour every week of the semester, playing together on the magnificent Austin organ in the Chapel. During my four years at Trinity, John was my teacher, my mentor, and my friend, and we have stayed friends for these past 40 years. … I can’t imagine Trinity without him.”

Jennifer Bober ’91, also a former member of The Chapel Singers, directs the Piedmont Chorale of New Jersey. She recalls that as she knocked on the Chapel door as a prospective first-year, “I had no idea that the man who would open that door would literally change my life. I learned quickly that John has a true gift for mentoring young musicians,” she says. “His guidance and continued friendship are part of the core of confidence that carries me through challenging times and leads me to take leaps I otherwise would not have dared.”

From all accounts, Rose, who has performed at venues across the country, including The Kennedy Center in Washington, D.C., and the Mormon Tabernacle in Salt Lake City, in addition to numerous venues in Europe, may be most remembered for the impact he had on the students he taught and the college he served.

“John Rose is an extraordinary human being, period,” says Read. “His legacy at the college includes generations of students who were engaged in learning and singing sacred music, playing a remarkable instrument—our college organ—and making important contributions to our community.” 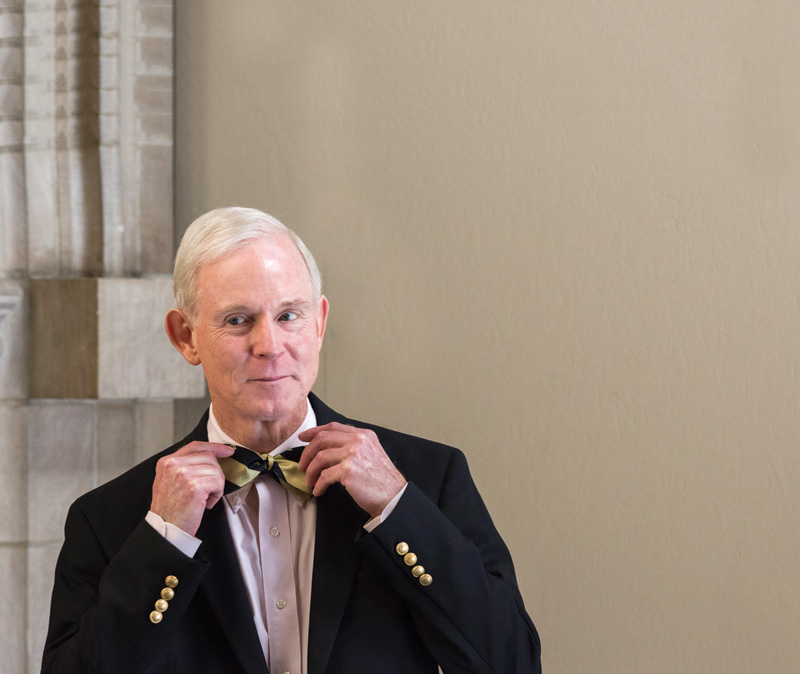 “Under his patient, kind exterior, John Rose has a fiery passion for music that has fueled him through a long, ever-changing career. He has passed that passion on to generations of students.”
—Patrick Greene ’07

“John Rose matches his professionalism with kindness in all of his interactions. His constant warmth and encouragement will be sincerely missed by not only me but all of The Chapel Singers.”
—Kyra Lyons ’20, Illinois Scholar

“I met John Rose after hearing The Chapel Singers perform at Lessons and Carols my first year here. I had been struggling to find my niche on campus, and although I had sung in the past, I was really missing music in my life. I contacted John about joining, and he took me under his wing almost instantly as a sort of musical father figure, which was really special being so far from home.”
—Max Furigay ’19, Jill G. and Peter S. Kraus ’74 Presidential Scholar

“He has made The Chapel Singers what we are today. … He will be greatly missed but always remembered fondly by all the lives he touched with music.”
—Diana Rose Smith ’19, Mitchell N. Pappas Scholar

“Watching John work with his students is inspirational: he is unfailingly cheerful, supportive, and demanding—all while being a consummate professional and expecting the same of his students. The great tradition of music at Trinity and the Chapel owes a huge thanks to John Rose.”
—Liesl Odenweller ’88