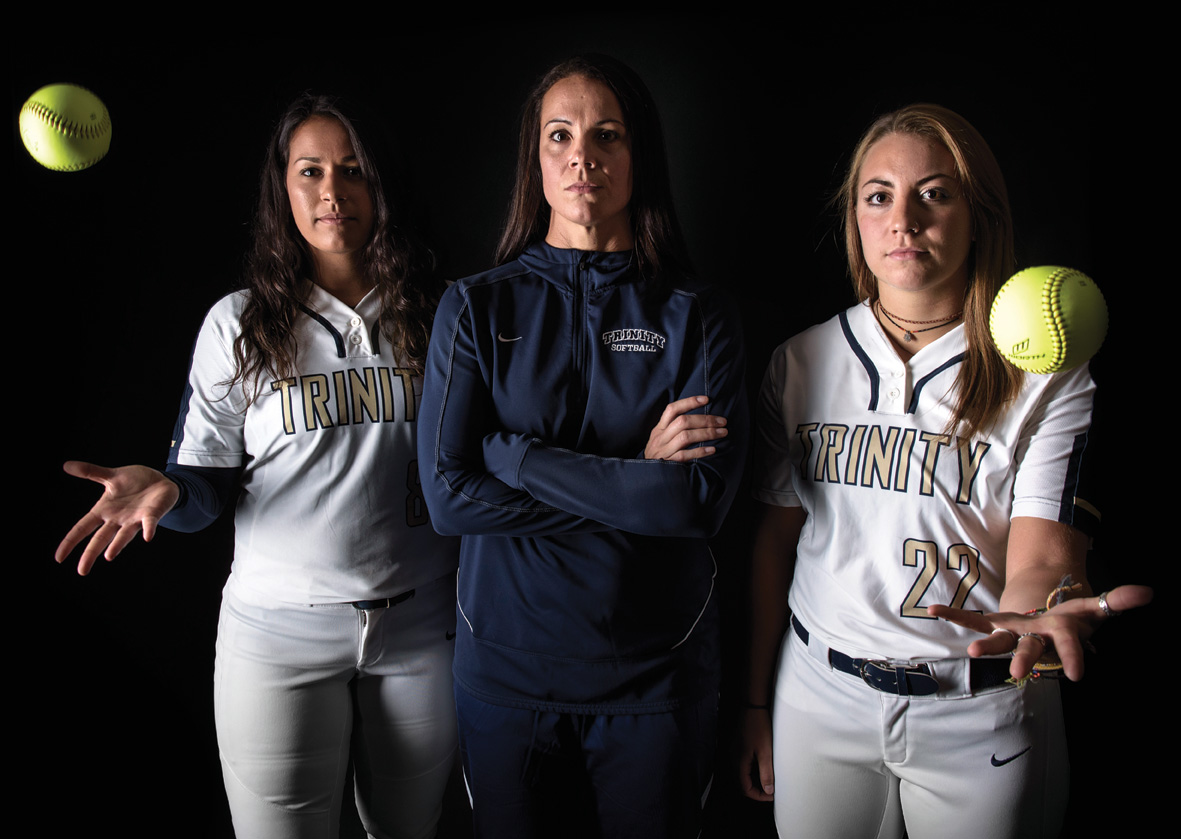 Alumnae offer insight into why they coach By Mary Howard           Trinity College alumnae who are coaches are teaching their athletes how to hit curveballs, both on and off the field. “It’s not just about putting wins on the board,” says Caitlin Hitchcock ’00, M’04. “It’s also about helping student-athletes find their place in the world.” Now in her 16th season as Trinity’s head softball coach, Hitchcock says that seeing her players mature—“not only with softball skills but as people, leaders, and teammates”—is the most rewarding aspect of her job. She didn’t come to Trinity thinking she would be a collegiate coach. “I wasn’t quite sure what I wanted to do back then,” she says. But her time as a student-athlete on the basketball and softball teams “pulled me in. I really enjoyed my athletic experience here, which contributed to my choosing to stay in athletics.” After graduation, she took a graduate assistant position at Trinity, coaching volleyball and softball while working on her master’s degree in American studies. She also was an assistant basketball coach from 2000 to 2003. 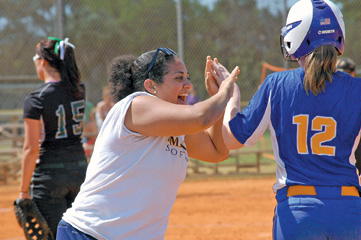 Over the years, she has inspired several of her players to go into coaching, including Olivia Berry ’14, who was hired in summer 2017 as the head softball coach at Emmanuel College in Boston. “Coach Hitchcock always pushed us physically and mentally on the field,” says Berry, who was named to the 2014 New England Small College Athletic Conference (NESCAC) All-Sportsmanship Team. “She expanded my capabilities, and that affects me daily.” Berry drew heavily on those life lessons learned on the diamond as she started her own career. As an assistant softball coach at Emmanuel, she also worked three part-time jobs and was finishing her master’s in sports leadership at Northeastern University. “Now I make sure my players push themselves because whether they know it or not, they are capable of more than they can imagine.” Hunter Drews ’16, head women’s volleyball coach at State University of New York (SUNY) Geneseo, requires her players to participate in two leadership programs each semester. “I’m tough on them,” she says. “I expect them to be well rounded. Homework is not an excuse to miss practice or vice versa.” 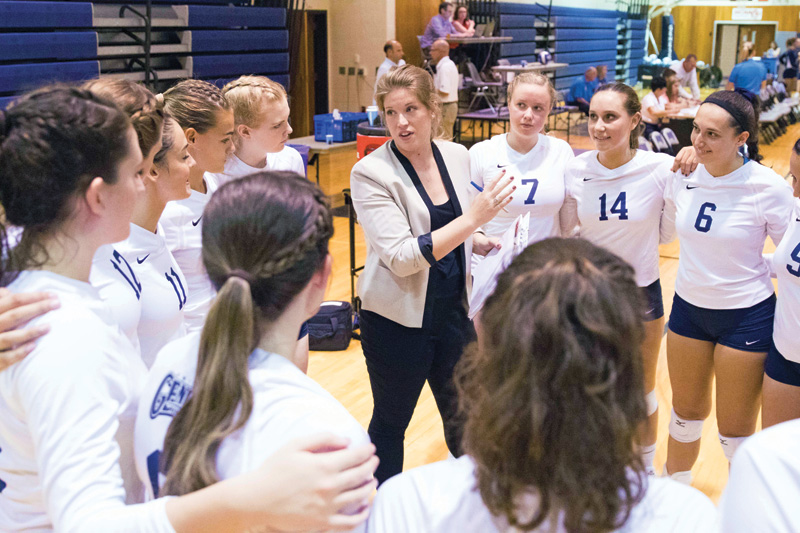 Drews was an assistant coach at Geneseo, “deep into planning for graduate school in forensic psychology,” when the team’s head coach left. “There was no way I couldn’t apply for the job,” says Drews, who double majored in psychology and American studies at Trinity. She became a driving force behind Geneseo’s resurgence during the 2016 season, as the program made its first postseason appearance in five years. She also helped mentor a pair of rising sophomores to SUNY Athletic Conference All-Star recognition. “I couldn’t leave what I had a hand in creating,” she says. Now she’s exactly where she wants to be, she says. “I love it; volleyball all day, every day.” However, the 24/7 nature of being a head coach can be overwhelming, says Kristen Noone M’07, who served as Trinity’s head men’s and women’s swimming and diving coach from 2000 to 2014 before taking on administrative roles, including a stint as interim director of athletics in 2017. “You better have a passion for it.” Coaches are responsible for everything from recruiting and organizing practices to counseling student-athletes and engaging parents, she says, adding that most coaches in Division III sports have only one assistant. “This makes every sport a year-round sport.” It was Noone’s passion for athletics that led her to ditch a high-powered career in the insurance industry to coach collegiate swimming. “It was, by far, the best decision I’ve made.” To bring more women into coaching and to foster mentoring relationships, NESCAC held a Coaching Symposium for Women last April in Westford, Massachusetts. The two-day event, which Noone helped organize, gave female student-athletes from 11 member institutions an opportunity to learn about coaching and athletic administration. “Coaches at various levels, seasoned administrators, and keynote speakers shared their experiences and provided opportunities to discuss the challenges women face in the field,” she says. Four Bantams were among the attendees, including Kelcie Finn ’18. A standout athlete on the field hockey and women’s ice hockey teams, Finn says a career in coaching will give her an opportunity to give back to the sport. She says Head Field Hockey Coach Anne Parmenter is an inspiration. “She takes our skill and combines it with her knowledge of the game but stresses that it is our commitment to improving that brings it all together.” A double major in history and classics with a concentration in Latin, Finn hopes to coach and teach at a boarding school. While doing a postgraduate year at Westminster School in Simsbury, Connecticut, she “fell in love” with the boarding school lifestyle. 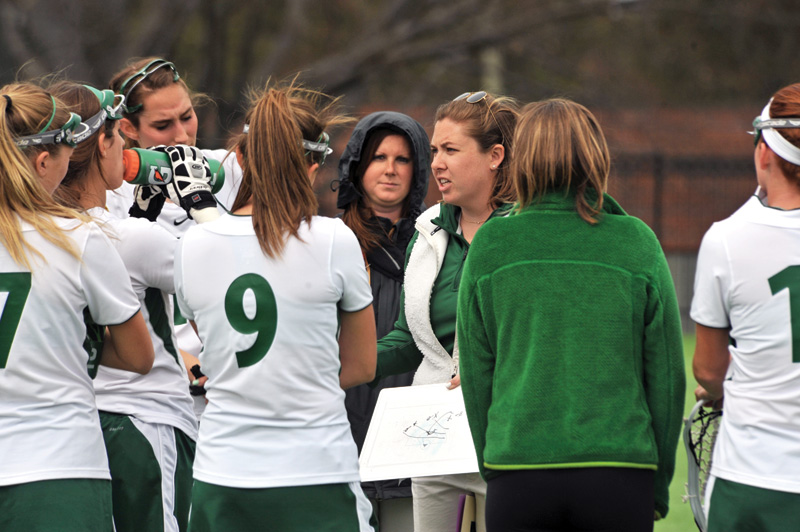 Having great mentors helps Michelle Smith ’08, M’11, head women’s lacrosse coach at Babson College, keep her perspective. “It’s a job with a lot of highs and lows,” she says. “You need someone you can call at a moment’s notice when something goes wrong.” For her, that someone is Parmenter, her field hockey coach at Trinity. “She always makes me feel like that next, great win is right around the corner.” Smith was a two-sport athlete at Trinity, playing lacrosse in addition to field hockey. “Those are the first college memories that come back to me,” she says. While playing lacrosse, she saw the program improve dramatically. “We went from having zero postseason games to playing in the NESCAC championship my senior year.” Briana Daley ’18, co-captain of the Trinity women’s cross country team and a member of the women’s track and field team, also plans on a career in athletics. “I want to be that mentor who helps people reach their full potential,” she says, adding that being a college athlete has taught her much more than just how to run. “I have learned how to connect with people, how to deal with success and failure, and how to be competitive in a healthy way.” Daley was one of 200 athletes to participate in the National Collegiate Athletic Association’s Career in Sports Forum, held last June in Indianapolis. She says the forum’s speakers impressed upon her “the importance of being open to new experiences, taking advantage of opportunities, and pursuing your passions.” An English and educational studies major, she plans to pursue a graduate assistant position in track and field and cross country after graduation. Hitchcock feels that bringing more women into coaching will mean more resources and mentors for young women, like Finn and Daley. “It’s good for the sport; it proves to the student-athletes that they can do what we are doing,” she says.