Pediatrician and geneticist D. Holmes Morton, M.D., IDP’79 could have enjoyed a lucrative career as a researcher at a prestigious teaching university. Instead, he found meaningful work among the Plain People—the Amish and Mennonites of Lancaster County, Pennsylvania—treating children afflicted with genetic illnesses. 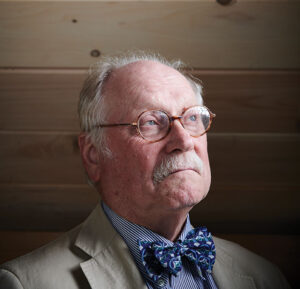 Morton is considered a leading authority on diseases that have plagued these sects for generations. Using cutting-edge technology, Morton and his team have discovered numerous genetic illnesses and developed novel treatments, says Joseph B. Martin, M.D., former dean of Harvard Medical School. “The care [Morton and his team] provide for these families has no counterpart,” says Martin.

Thanks in part to his work, these disorders are recognized as more common and highly treatable if diagnosed early. In fact, most newborns in the United States and throughout the world are tested for GA1 and MSUD as part of routine screenings. “These are not just curious diseases of the Amish,” says Morton. “They affect people all over the world.”

Morton has received numerous accolades for his work, including the Albert Schweitzer Prize for Humanitarianism in 1993 and a John D. and Catherine T. MacArthur Fellowship in 2006. He also received an honorary doctor of science degree from Trinity in 1990. “He is one of Harvard Medical School’s most remarkable alumni,” says Martin.

So, it may seem surprising that Morton, growing up in a small town in West Virginia, did poorly in school. An independent learner, he preferred studying literature, mathematics, and music outside of class. “I thought of myself as a good student, but what I studied never quite matched what was going on in school,” he says.

The spring before his high school graduation, he dropped out to work as a boiler man on steam-powered ore boats on the Great Lakes. In 1970, during the Vietnam War, he was drafted and reluctantly joined the U.S. Navy to do the same work.

But wherever he went, he continued his studies. “Holmes is far more impressed with what he doesn’t know than with what he knows,” says friend and mentor William Mace, Trinity professor of psychology, emeritus.

Before coming to Trinity, Morton took correspondence courses in geometry and physics and studied at community colleges. After reading an article in Scientific American, he became fascinated by developmental psychology and neurology, which led to an interest in medicine.

Still, he was an unlikely applicant to Trinity. “My grades were poor, standardized test scores were unremarkable, and neither indicated an aptitude for science,” he says. But Professor of Religion Emeritus Frank Kirkpatrick, then director of the school’s Individualized Degree Program, saw something in the 24-year-old. “He was determined and self-directed, just the kind of student we were looking for,” says Kirkpatrick.

Morton thrived in the program, which is designed for older students and focuses on independent learning. “He was the talk of the department,” says Charles A. Dana Professor of Biology Craig Schneider. “We were always impressed with his questions.”

Morton spent so much time in the Trinity library that the college eventually paid him to work at the reference desk. “Holmes’s goal was to learn as much as he could, as fast as he could,” says Mace. His dedication paid off, and 4½ years after his interview with Kirkpatrick, he graduated Phi Beta Kappa with honors in his majors of biology and psychology.

He went on to Harvard Medical School, graduating in 1983, completed his residency in pediatrics at Boston Children’s Hospital, and was awarded a research fellowship in biochemical genetics at Children’s Hospital of Philadelphia. It was in Philadelphia where Morton made a discovery that changed the course of his career.

A lab technician asked him to analyze a urine sample from a 6-year-old Amish boy from Lancaster County, Pennsylvania. The boy was mentally alert but had no control of his limbs and was confined to a wheelchair; his local doctor had suspected cerebral palsy.

In examining the sample, Morton instead found signs of GA1, a metabolic disorder that can inhibit the body’s ability to process certain proteins. Children with GA1 are born healthy, but when they develop a fever or common childhood illness, toxic chemical compounds build up in their brains and cause severe damage. Those who survive are left with irreversible paralysis that resembles cerebral palsy. At the time, GA1 had been documented in only eight patients worldwide, none of them from Lancaster County.

Genetic researchers have long been interested in Amish and Mennonite families because of their closed communities, says Morton. Marriage to outsiders is strictly forbidden in these religious orders, resulting in shallow gene pools. The Plain People now in Lancaster County are descended from fewer than 200 individuals who immigrated to the United States from Europe in the 1700s. This reduced genetic diversity makes these populations more susceptible to genetic disorders, including GA1 and MSUD.

In June 1988, Morton visited the Amish boy at his family’s farm and learned that other children had similar symptoms. “The Amish called them ‘God’s special children’ and said they had been sent by God to teach us how to love,” says Morton. “That idea deeply affected me.”

He began visiting these children weekly, rarely charging for his services. Two part-time jobs—doing research at Johns Hopkins University and caring for newborns at Bryn Mawr Hospital—paid the bills. He discovered that untreated GA1 caused the afflictions of many of these “special children” but that the disease was preventable. Children who were put on a protein-restricted diet supplemented with the vitamin riboflavin rarely experienced the devastating effects of the disease.

To continue this work, Morton and his wife, Caroline, decided to open a research and treatment clinic in the heart of Amish and Mennonite country, where their patients lived. They applied for numerous grants, but with little success, they agreed to take out a second mortgage on their home to fund an expensive piece of medical equipment that would allow Morton to test infants for GA1 before symptoms developed.

On September 20, 1989, just before they were to sign the mortgage papers, an article about them appeared on the front page of The Wall Street Journal. Frank Allen, then the Philadelphia news bureau chief for the Journal, had spent a day shadowing Morton as he made house calls to his patients. While he was overwhelmed by what he saw—“These children were horribly damaged,” says Allen—he was greatly impressed with Morton’s passion, gentleness, and sense of humor.

By 7:00 a.m. on the day the story ran, phone calls were flooding the bureau. The numerous donations that followed, including two checks for $100,000 each, more than funded the equipment. “It all worked out because of Frank Allen,” says Morton. The two remain friends, and Allen, now retired, is writing a book about Morton.

The Clinic for Special Children, once dubbed “the little clinic in an Amish corn field,” in Strasburg, Pennsylvania, was founded that same year as a combination pediatric-care clinic and cutting-edge research facility for rare genetic conditions. Over the years, the nonprofit has evaluated 2,600 patients from 34 states and 14 countries and with more than 150 genetic conditions.

In 2012, Morton founded a second clinic, the Central Pennsylvania Clinic—A Medical Home for Special Children and Adults, in a rented space in Belleville, Pennsylvania; construction was completed on a new Belleville facility in August 2019. The Strasburg and Belleville clinics have the same mission: to provide general health care to those with rare, genetic disorders, says Morton. “But [the Belleville clinic] recognizes the fact that genetic disease affects people of all ages.” Carefully managing these disorders from birth to death results in better lives for the patients, he says.

Allen notes that Morton’s extraordinary dedication and his successful clinic model have inspired seven other clinics near Amish and Mennonite communities throughout the United States.

Though Morton has affected thousands of lives in the 30-plus years of his career, he remains humble. “It has been an interesting job, working in this setting and culture,” he says. But with an eye toward the future, he stresses the importance of getting younger people involved in this work. “These kinds of medical issues will always be here, and it’s important that there are people to replace me.”