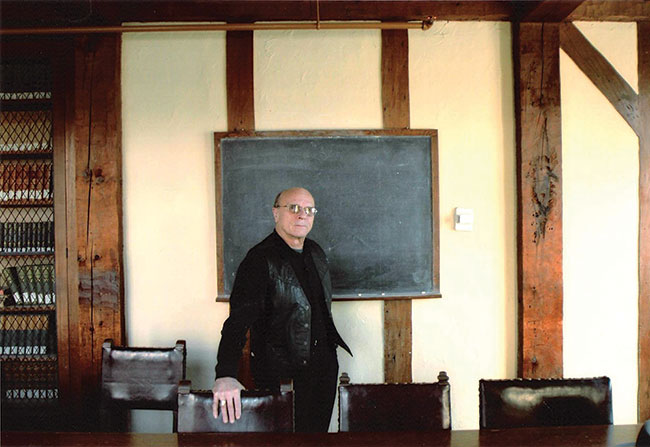 DEGREES: B.A. in English; Ph.D. in English, the University of California, Irvine

JOB TITLE: Full professor and former chair in the English Department, Dartmouth College, 1970–2010; author, Dylan’s Autobiography of a Vocation: A Reading of the Lyrics 1965–1967 and several other books

FAVORITE TRINITY MEMORY: Certain serendipitous moments come to mind. One: in my senior year, I along with various friends would go “over the the rocks” after studying up to 11:30 or so and meet for beers in Phil’s bar on Zion Street. There we’d gossip over courses or ideas or irrelevant whatnot, while in another booth, George Will (also ’62) was discussing serious social issues with other stu­dents no less socially and politically committed to turning the country in different, more humanly responsive and responsible directions. The times were indeed a-changin’, even before Dylan’s song underscored it. Trinity itself would be changing its public agendas in a similar way, notably toward a more socially diverse student body and an electronically alert college. But that would also leave behind for me a therefore more memorably private and pre-IT Trinity—as if it were a “most distant, single color, about to change” (Wallace Stevens).

What led to your interest in the lyrics of Bob Dylan? After graduating from Trinity, I heard some of Dylan’s early songs while visiting friends. Once the album Bringing It All Back Home came out and then the song “Like a Rolling Stone,” I knew then his was a special vision that went far beyond social protest. That understanding led me to teach Dylan’s lyrics at Dartmouth College and, after retiring, to write Dylan’s Autobiography of a Vocation. Thus I try to read the songs he wrote between 1965 to 1967 in terms of a comment he made in an early interview: “You’re going to die. You’re going to be dead. It could be 20 years, it could be tomorrow, anytime. So am I. I mean, we’re just going to be gone. The world’s going to go on without us. All right now. You do your job in the face of that, and how seriously you take yourself you decide for yourself.”

What did you most enjoy about teaching classes on the subject? I enjoyed most having students in different periods come across Dylan’s songs for different reasons. I had no need to “make a case” for their value to students in the ’70s. Later on, though, they had changed, and I had to change how I taught the course, which mostly consisted of discussions of indi­vidual songs. Those changes along with how the students raised issues and insights I had missed constantly challenged me to rethink my own interpretations of Dylan’s lyrics.

In what other areas have you focused your research? I taught courses in American nonfiction prose. Autobiography was my special area of academic interest, which in the early 1970s hadn’t yet attracted much serious critical consideration as a significant literary genre. Beyond that, I taught seminars on  the tales of Edgar Allan Poe and the poetry of Wallace Stevens, a Hartford poet whose daughter worked at Trinity while I was a student. I’ve written and published works on all three of these subjects.

How did your time at Trinity prepare you for your career? Trinity, no surprise, provided me with a sound intellectual background. Do I need to recite the usual “liberal arts” beatitudes that I experienced there? (But perhaps the relatively recent IT co-option of what matters in a student’s education even at “liberal arts” colleges like Trinity and Dartmouth requires one to keep repeating them.) The different courses I took at Trinity allowed me to map out the intellectual zones that most mattered to me then and now. Also, the small size of Trinity’s student body led to many conver­sations with peers from different social as well as educational backgrounds—in short, to the stimulating collisions of ideas.

Did you have a professor who was particularly influential? Who was it, and why? Among a short list of others, I had two favorite professors: Paul Smith, hired by our new English Department Chair Frederick Gwynn, and William Johnson, who taught in the Religion Department. Smith brought serious literary-critical thought into what had been a belletristic English Department. Johnson’s course in exi­stential thought made a major difference in how I would think about everything. His assignments and lectures eventually influenced my take on Bob Dylan’s songs.