Greg Convertito and George Thekkedath, members of the Class of 2016, were awarded Certificates for Outstanding Presentations at the Mathematical Association of America’s (MAA) annual MathFest competition held last summer at the Connecticut Convention Center in Hartford.

The competition, billed as a “celebration of mathematics,” gives students from colleges and universities across the globe the opportunity to demonstrate their facility, creativity, and skill in math. The 2013 MathFest featured student presentations from some of the top institutions in the United States, Canada, and the United Kingdom, including Yale, Notre Dame, Duke, Columbia, Princeton, and Dartmouth. 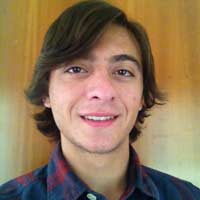 It’s unusual for first-year students to be awarded Certificates for Outstanding Presentations, but neither David Cruz-Uribe, professor of mathematics and Convertito’s adviser, nor Gregory Kelsey, visiting assistant professor of mathematics and Thekkedath’s adviser, were surprised. Cruz-Uribe called Convertito “one of the best students I’ve ever worked with. His enthusiasm and his mathematical spirit are just amazing.” Similarly, Kelsey said he was “very pleased and impressed” with Thekkedath’s ability and the quality of his presentation. “It speaks to his ability to communicate his ideas.”

Both Convertito, a George A. Kellner ’64 Presidential Scholar from Fairfield, Connecticut, and Thekkedath, a Class of 1918 Scholar from Lawrenceville, Georgia, participated in last summer’s 10-week Interdisciplinary Science Program at Trinity, an innovative academic program designed to broaden and enrich the study of science and mathematics, under the leadership of Alison Draper, director of the Science Center and lecturer in interdisciplinary science. As such, both students were in Hartford when the MAA get-together was taking place. 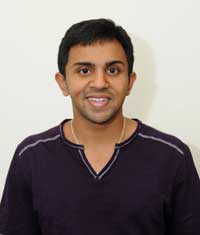 The title of Thekkedath’s project was “Geometry and Mass Transit Distance,” while Convertito’s was “Rationality of Calculus Optimization Problems.”

The MAA student chapters program was launched in January 1989 to encourage students to continue their studies in the mathematical sciences, provide opportunities to meet other students at national meetings, and offer career information in the mathematical sciences. There are approximately 550 student chapters on college and university campuses nationwide.