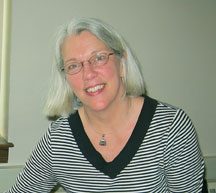 Research Associate Professor Terri Williams has been awarded a three-year, $488,877 grant from the National Science Foundation (NSF) to investigate segmentation in arthropods, a familiar group of animals that includes flies, shrimp, crabs, and spiders.

Williams’s research will be done in collaboration with professors Lisa Nagy at The University of Arizona in Tucson, Arizona, and Ariel Chipman at The Hebrew University of Jerusalem in Israel, as well as Trinity Professor of Computer Science Ralph Morelli. Students will have the opportunity for international exchange between the schools’ labs and live exchanges of ideas through Web-based meetings.

Their project, which was funded as of September 15, is part of a new program at NSF called International Collaborations in Organismal Biology between U.S. and Israeli investigators.

Arthropods are a large and diverse group of animals whose basic body plan consists of a number of repeated segments. With her students, Williams explores how embryonic development of segments might have been modified during evolution to give rise to the many kinds of arthropods living today.

A member of the Trinity faculty since 2010, Williams is a research professor who works with undergraduates, especially during the summer, to conduct basic lab research. She holds a B.S. from Duke University and a Ph.D. from the University of Washington.