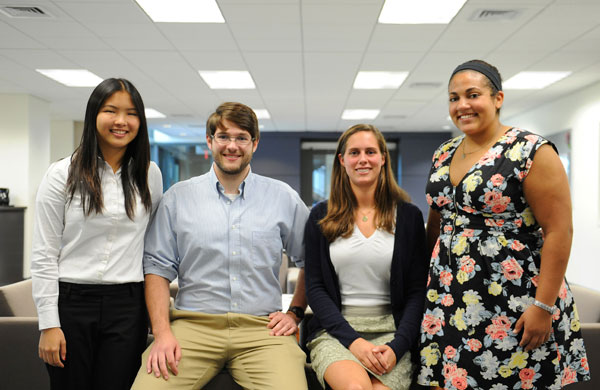 “Career development is a process, not an event,” says J. Violet Gannon, director of Trinity’s Career Development Center (CDC). Because today’s young workers can expect to hold an average of more than a dozen jobs in their adult lives, Gannon notes, students should be encouraged to invest time in career development as they would in academic courses and to begin using the resources of the CDC during their first year on campus.

Helping younger students make the best use of those resources is a cadre of four upper-level peer mentors, the CDC Fellows. In the program begun this year, the Fellows, who work closely with staff, guide students in building portfolios, assist with programs, host events, develop programming for first-year seminars, and serve as liaisons between the CDC and student groups. The Fellows also act as “eyes and ears on the street” to channel student feedback on the CDC to the staff.

Gannon describes the CDC Fellows as a diverse team that relies on its members’ strengths. “The qualities we look for,” she says, “are confidence, humility, and graciousness–and the ability to speak honestly about their own struggles and successes. All of them … are excellent role models and educators for younger peers.”

OLIVIA BERRY ’14
Majoring in sociology and minoring in Jewish studies might not seem like the obvious academic path for Olivia Berry, who knew early on that she was interested in a career in college athletic administration. But “majoring in sociology has taught me essential critical thinking techniques that I know will be transferable into the workforce,” Berry says.

At Trinity, Berry has played on the varsity softball team, worked as an office assistant in the CDC, and served as a team advocate for Team IMPACT and as co-chair of the Men of Color Alliance.

She also has held several off-campus jobs. She plans to obtain a master’s degree in sports management or sports psychology.

JAMES GEISLER ’14
James Geisler admits that during his own freshman year, he wasn’t sure what the CDC was. “I wandered in because I was looking for a campus job,” he says. He has worked in and used the CDC every semester since.

A double major in psychology and philosophy, Geisler notes that when he is not working with the CDC, he is “likely either tucked into the recesses of the library working on my honors philosophy thesis or leading Trinity’s nationally ranked mock trial team as its president.” His potential career interests include involvement with the United Nations, work in the developing field of space law, and teaching.

PORNPAT POOTINATH ’14
Drawn to Trinity by its Human Rights Program, Class of 1939 Memorial Scholar Pornpat Pootinath has been a member of Habitat for Humanity and served as a case manager intern and legal intern at the International Rescue Committee. Majoring in educational studies and sociology, she notes she is “curious about inequalities, intrigued by how people behave in different situations, and interested in understanding how societies shape the lives of people who live in them.”

A Goldman Sachs scholar during her first two years here, Pootinath also has been a resident assistant, a student assistant at Trinfo.Café, and an academic facilitator at Hartford Magnet Trinity College Academy. She hopes to pursue a career in international education or law.

ALEXANDRA (ALEX) VILLA ’14
With an eye toward working in advertising and marketing and a love of travel, Alex Villa has studied abroad in Rome and undertaken internships with a human resources consulting company, an architectural firm, and an advertising agency. She chose sociology as her major after having taken several introductory psychology and sociology courses. She says, “I discovered a passion for the human mind–learning what makes people tick, how perceptions are influenced, and why we act as we do.”