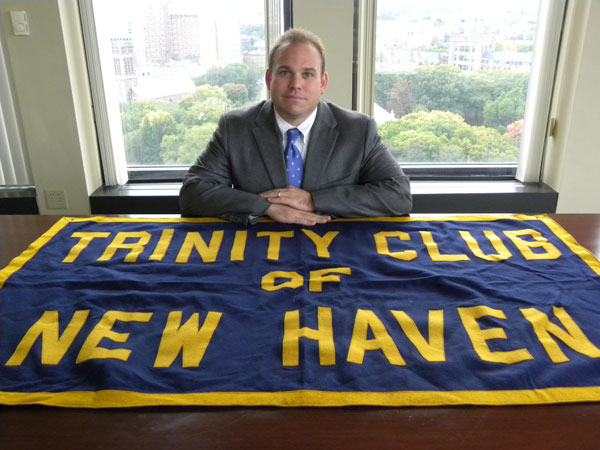 “I like Trinity people,” says Mike Leone ’01, president of the Trinity Club of New Haven and an attorney at the Hartford-based firm of Halloran & Sage. The statement comes as no surprise to those who know the Longmeadow, Massachusetts, native and have witnessed his commitment to his alma mater, his fellow alumni, and the entire Trinity community.

Leone played football for the Bantams for four years, served as co-captain in 2000, and graduated from Trinity in 2001 with a B.A. in English. It was Magistrate Judge Thomas Smith’s “Introduction to Law” course that contributed to Leone’s choice to pursue a career in the law.

“The hands-on education, and being able to interact in small settings, was very important for me,” Leone says. “Since graduating, I’ve seen how respected Trinity is and how valuable the degree is.”

He went on to the University of Connecticut School of Law, where he was a member of the Criminal Trial Clinic and Appellate Clinic. He earned his law degree in 2005.

Leone’s next stop was clerking for a New Jersey judge and mediating cases for the State of New Jersey. A position as an associate in a law firm then brought him to New Haven, Connecticut.

“In July of 2012, I reached out to Trinity. We had no club in New Haven at the time. There were events in Stamford and in Hartford, but you know how traffic is,” says Leone. “I loved my time at Trinity. I thought it was important to expand its brand to this corner of the state, beyond the Hartford area.”

So he contacted the Office of Alumni Relations, and shortly thereafter, the Trinity Club of New Haven was revived. The club’s first event was a “Welcome to the City” reception at BAR, a restaurant and nightclub in New Haven. Recent events have attracted dozens of Trinity alumni, and the club’s list of members includes dozens more. He inherited the “Trinity Club of New Haven” banner from Peter Jongbloed ’80, who was involved in the earlier version of the club.

Among the events organized by Leone and the Trinity Club of New Haven were a sunset cruise of the Thimble Islands and a gathering at Yale to cheer on the Bantams as they won their 14th Men’s Squash National Championship.

Leone has stayed involved with the football team, participating in networking events organized by the coaching staff for Trinity players.

“One of the great things about Trinity is that Trinity people want to help Trinity people. This is a great way to get alumni plugged into each other. One of the things we should continue to do is help alumni help each other out,” Leone adds.

Moving forward, he hopes to build the relationship with other clubs in the state and to continue hosting events and bringing people together, not only in New Haven but along the entire Connecticut shoreline.

Leone lives in Branford, Connecticut, where he serves as the secretary of the Democratic Town Committee and has been an elected member of Branford’s Representative Town Meeting. And when he says, “I like Trinity people,” he means it. Leone’s wife, Mimi, is a member of the Class of 2004. They are expecting their first child this spring.