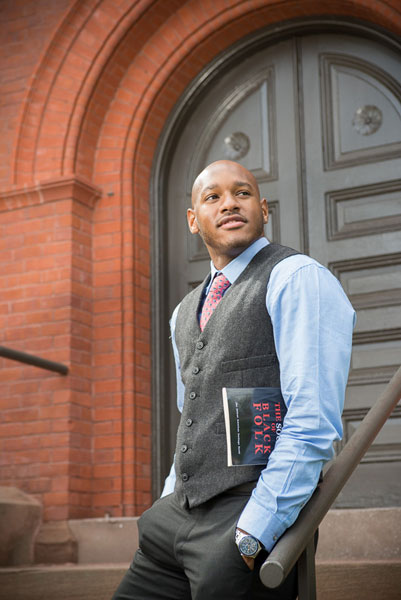 David Brown ’06 is back at Trinity as the Ann Plato Fellow.
Photo by Al Ferreira

In August, I returned to Trinity for the third time in my life and began my seventh fall semester on campus–not for a fourth attempt at senior year but to teach English Renaissance and African American literature. When I entered Trinity as a freshman in 2002, as a first-generation college student, I was unaware that Trinity would shape nearly every facet of my life thereafter. I did not know Trinity would continue to mold me and even redirect me toward my life’s passion.

In 2007, my professional path brought me to Trinity for a second time, as a recruiter for Teach For America (TFA). Immediately following graduation in 2006, I took an entry-level position in New York City with TFA, and within a year I was promoted to recruitment director. Connecticut was assigned as my recruiting territory. Thus, from 2007-2009, I found myself back at Trinity frequently, meeting with various members of the community and working hard to convince the College’s best and brightest seniors to consider TFA as a postgrad option.

I was particularly successful recruiting at Trinity because various administrators and faculty, many of whom are still on campus today, including President Jones, Dean [of Multicultural Affairs Karla] Spurlock-Evans, and [Professor of English] Sheila Fisher, supported my efforts and reinforced the important message I delivered to Trinity’s seniors about educational inequity. TFA became the largest employer of Trinity’s Class of 2008. And this wonderful accomplishment became a Trinity Reporter cover story. It was truly a great moment for Trinity and for me.

Recruiting for TFA allowed me to develop important skills. Moreover, that productive postgrad experience brought me closer to what eventually became my professional dream of working on a college campus full time. Prior to enrolling in graduate school, I was simply trying to determine what I wanted to do with my life. Interestingly, I figured out my next career move while working at Trinity one day on behalf of TFA. In the spring of 2008, I met with former Trinity professor Susan Pennybacker at Peter B’s in the library, and she did what many of my greatest Trinity professors encouraged me to do years before: she convinced me I belonged in graduate school.

The purpose of my meeting with Susan was to persuade her to aid my TFA recruitment efforts during the coming 2008-2009 academic year. However, it was Susan who did the persuading. She connected me with an organization, the Institute for Recruitment of Teachers, which assisted me with the daunting graduate school application process. Eventually, I found myself at New York University (NYU) working under the direction of Professor John Michael Archer, who embodies many of the qualities that were possessed by the best Trinity professors I had as an undergraduate. For the second time in my life, I went from being in Hartford to being in New York on a weekly basis, this time to develop professionally in a way that would allow me to come back to Trinity yet again.

As Trinity’s Ann Plato Fellow, the first who is an alumnus of the College, I have returned to campus for the third time to accomplish a few things: inspire and educate Trinity undergraduates inside and outside of the classroom; (re)connect with the faculty and administrators who nurtured my nascent scholarly self; complete the research and writing for my dissertation, which argues that parental authority is a separate kind of social power in the early modern period; and teach a self-designed course, “(Early) Modern Literature: Crossing the Color-Line.” I am grateful to Trinity, and alumnus Robert Stepto ’66, for establishing the Ann Plato Fellowship years ago. And I am most grateful to my good friend and fellow Bantam, Sharre Brooks ’06, for bringing the Fellowship to my attention.

In my Trinity course, which combines English Renaissance and African American literature, I bring together two disparate literary periods and examine the points of contact between them that are often overlooked and remain underexplored. We are scrutinizing the literature of African American authors such as James Baldwin, Frederick Douglass, W.E.B. Du Bois, and Harriet Jacobs alongside the early modern period’s William Shakespeare and Christopher Marlowe, two white authors who “wince not,” to quote Du Bois, at sitting next to black authors during the conversations in my classroom. In the first few weeks of the semester, my students took intellectual risks and made the kinds of important intertextual connections that I believed would be possible.

My diverse academic fields of interest were anticipated by my adolescent experience of occupying black and white spaces and learning how the invisible boundaries between the two were socially constructed and unstable: I grew up in a predominantly black neighborhood in South Norwalk, Connecticut; however, I attended a predominantly white, private secondary school, on a generous scholarship, in New Canaan, Connecticut. I often found myself having to confront or educate people who had trouble reconciling my hybrid identity in their primarily black or white worlds. Now, as a scholar, I sometimes meet people who cannot fathom how my seemingly disparate intellectual interests–English Renaissance and African American literature–complement one another.

Not only do I see their important connections, I believe they are integral for showcasing intertextuality and the interrelatedness of genres and for dismantling barriers that prevent scholars from productively mixing black and white authors or characteristically black and white literary periods, e.g., the English Renaissance and the Harlem Renaissance. It can be done. And it is being done in my Trinity course that meets in 115 Vernon, room 106, the very classroom in which, not that long ago, I took “Literature of Social Protest” with Trinity’s [Allan K. and Gwendolyn Miles Smith Professor of English] Paul Lauter and “Theaters of the Urban Streets” with [James J. Goodwin Professor of English] Milla Riggio, the latter whom President Jones fittingly labeled as my “academic godmother” because of the supportive role she has played in my life since I was a Trinity junior. 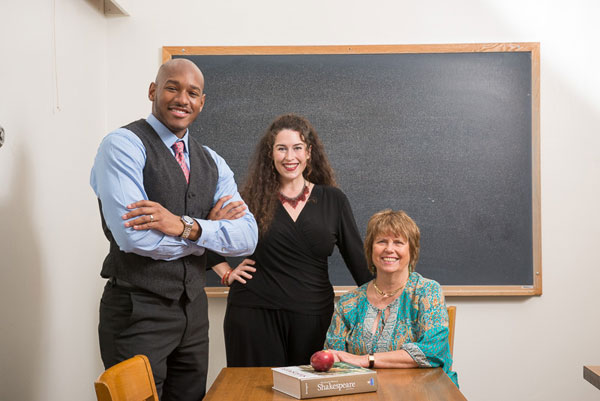 David Brown ’06, who was a Herbert J. Hall Scholar, credits Associate Director of Admissions and Network Outreach Kalia Kellogg, center, with bringing him to Trinity as an undergraduate and says that President Jones considers Milla Riggio, James J. Goodwin Professor of English, right, his “academic godmother.”
Photo by Al Ferreira

I have felt a magnetic attraction to Trinity ever since my first campus visit as a prospective student in the summer of 2001. My strong relationship with the College is complex and rooted in the connections I established with various people more than a decade ago. My very first week back on campus this fall was filled with handshakes and hugs–from staff members in places including The Bistro, The Cave, and the campus Post Office who remembered me from my undergraduate and TFA recruitment days; from my friends in Multicultural Affairs, such as Carol Correa de Best; from faculty within and outside of my department; from people in Admissions, such as Kalia Kellogg, who recruited me for Trinity when I was a high school senior; and from various other administrators. Undoubtedly, Trinity is home, and it houses my academic family.

Being back on campus this time around was a bit surreal initially because Trinity has changed over the years, and I can see that I have changed, too: instead of a student I.D., I have one that reads “faculty”; instead of a dorm room, I have an office in 115 Vernon; instead of studying, I have to make lesson plans; and instead of dining in Mather with undergraduate peers, I have lunch in Hamlin and Trinity Restaurant with my esteemed colleagues. Trinity has been, and continues to be, a fundamental part of my life’s most significant milestones. It is here, at Trinity, where I will finish my dissertation next spring and complete the final step in the process of earning my third degree–a Ph.D. from NYU. Each day that I am on campus, I feel the magic of being, and I cannot help but believe that dreams teeter on the edge. Oftentimes, it is the force of our own conviction that makes those dreams real.

The Ann Plato Fellowship is a one-year pre- or postdoctoral fellowship to promote diversity at Trinity College. Ann Plato Fellows join the faculty in one of more than 30 academic departments or interdisciplinary programs, interact regularly with colleagues and students on campus, and work on their own research. Fellows contribute to enhancing diversity at the College by increasing ethnic and racial diversity, maximizing the educational benefits of diversity, and/or increasing the number of professors who can and will use diversity as a resource for enriching the education of students.