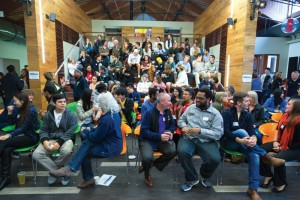 After months of long days, late nights, and intensive interaction with fellow students, faculty, and administrators, five working groups of students shared their strategic recommendations for strengthening Trinity’s campus culture at a Campaign for Community event, “TrinColl2Action,” at Vernon Social on November 7, 2015. A crowd of more than 200 listened as the students identified some of the key challenges on campus and proposed solutions to address them. 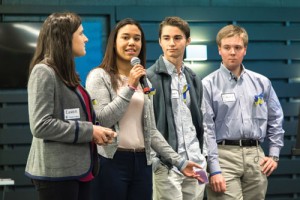 The Campaign for Community is an ongoing initiative launched by President Joanne Berger-Sweeney last April. Each of the student working groups focused on specific issues: academic environment, community involvement, rape and sexual assault, school pride, and social environment. After each group’s presentation, audience members provided feedback on the students’ ideas via smartphone. 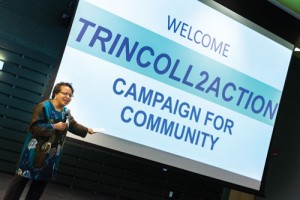 Berger-Sweeney commended the hard work of the students, staff, and faculty involved in what she described as Phase I of the Campaign for Community project, saying that she was “thrilled” by the students’ ideas. She pledged $25,000 from her Presidential Discretionary Fund to get some of the projects started, and she challenged the Student Government Association to provide additional funds. Berger-Sweeney said that Phase II for Campaign for Community participants will begin with them coming back together as a group to look at the feedback from the audience, and in the spring semester they will begin to decide how to put some of the ideas into action. 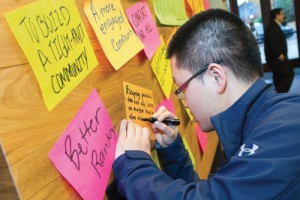 Berger-Sweeney said that the students involved “were analytical, gathered data, determined what problems needed to be addressed, and came up with actual recommendations and ways to gauge reaction to them. I strongly believe that if the ideas come from the students themselves, then they’re more likely to come to fruition.”