Editor’s note: Welcome to “Trinity Treasure,” the newest standing feature in The Trinity Reporter. Each issue will highlight a person, place, or thing on campus that is just what the name implies: a Trinity treasure. Do you have an idea for what to showcase? Please send your suggestions to sonya.adams@trincoll.edu. 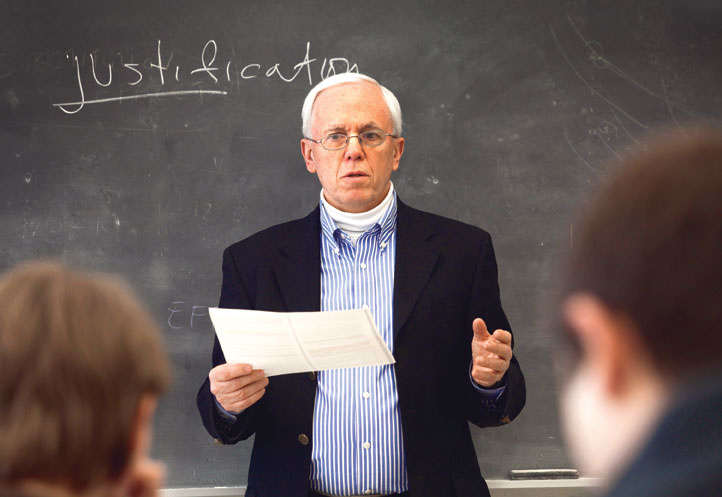 FRANK KIRKPATRICK ’64
By the time Frank Kirkpatrick ’64 officially retires this spring, he will have spent 51 years ’neath the elms of Trinity College. Kirkpatrick came to campus as a first-year student in 1960, what he calls “an exciting time to be at Trinity,” as professors “cared deeply and taught rigorously about issues related to the civil rights movement among other social issues of the time.” After graduating Phi Beta Kappa with a B.A. in religion in 1964, he earned a joint M.A. in comparative religion from Union Theological Seminary and Columbia University and a Ph.D. in religious studies from Brown University. With competing job offers from Trinity and Connecticut College, he opted to return to his alma mater as an assistant professor of religion in 1969, the year that women first joined the student body. During his 47 years on Trinity’s faculty, Kirkpatrick has risen to full professor, served as department chair, and been named the Ellsworth Morton Tracy Lecturer in Religion and a Charles A. Dana Research Professor. In addition to his teaching, for which he was awarded the Thomas Church Brownell Prize for Teaching Excellence, Kirkpatrick has directed the Individualized Degree Program (IDP) and the First-Year Program, served as secretary and interim dean of the faculty, and been part of numerous other College committees. He counts helping to form the Humanities Gateway Program (formerly Guided Studies), in which students intensively study the history of Western culture, and serving for 12 years as ombudsman for the faculty as his proudest contributions to the College. On what he values about Trinity, Kirkpatrick says, “This College is a group of people who have in various ways created a sense of community. We are not just a bunch of atoms bumping against each other.” College Chaplain Allison Read says Kirkpatrick has a reputation among alumni as one of Trinity’s outstanding teachers. “He has challenged students to sharpen and clarify their moral and ethical thinking around critical personal, political, and social issues,” she says. “During my time as College chaplain, he has been an invaluable conversation partner.” In a stellar illustration of the relationships that Kirkpatrick, also an ordained Episcopal priest, has formed with his students, he and his wife accompanied former student James Kowalski ’73, the Very Reverend and Dean of the Cathedral Church in New York City, on a Reformation tour of Germany in October. “Some students I’ve taught have become my best friends,” he says. As for the future, Kirkpatrick says, he looks forward to spending time with his grandchildren and to studying economics through a moral philosophical perspective.