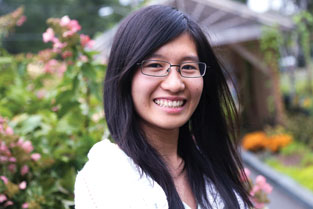 Many children dream of being an astronaut one day, but few young adults land the opportunity to play a day-to-day role in assessing the safety of space equipment — especially in their first job out of college. For Yun Gong ’15, that dream has become a reality, thanks in large part to a spring student internship at United Technologies Corporation.

Gong started a full-time job at UTC Aerospace Systems as an associate engineer in mid-August, following a stint as an IT intern in the spring at UTC’s corporate headquarters. UTC Aerospace is a major supplier to international space programs, producing advanced components for products ranging from satellites and optical systems to mission data recorders and space suits. It also designs and builds a broad range of equipment for commercial and military aircraft and for ground and naval defense.

Gong, whose family moved to New York from China when she was 10, loved the sciences from a very young age, an interest sparked by building toys, fans, and other “fun projects” with her father. She found her schools in Brooklyn very crowded, so when it came time to choose a college, she opted for a smaller liberal arts school that was strong in the sciences. Trinity turned out to be the perfect choice for her. “I liked the small class sizes, and the engineering professors are very accessible, so I could always get the help I needed,” she says.

Gong was part of the Association of Energy Engineers for two years and a member of the Robot Study Team for three years while working on her engineering degree.

She credits Trinity’s Career Development Center (CDC) and UTC Vice President and Chief Information Officer Nancy Davis ’79 for encouraging her to pursue the internship that led to her current position.

Davis and UTC colleague Pete Bradley ’87 returned to their alma mater in the fall of 2014 to talk with students about their careers and the importance of STEM education. After the session, they chatted with students about internship opportunities at UTC.

Severn Sandt, the CDC’s assistant director for strategic partnerships and outreach, introduced Gong to Davis, who discussed various positions with her. Gong was selected from a large field of candidates and spent four months at UTC, working on a variety of computer-based projects.

Sydney Doolittle ’17, of Milford, Connecticut, had a similar experience. In March 2015, Trinity held an informal on-campus reception for alumni and parents who work at UTC, part of an overarching strategy to strengthen and deepen ties with the global manufacturer. Sandt recalls, “In the course of it, Sydney got to talking with both Pete and Nancy, and they felt she would be a great candidate to do a summer internship with them. They invited her to apply to UTC’s Pratt & Whitney, and she was selected from a large group of applicants. She enjoyed her internship as well.”

Bradley, who majored in engineering at Trinity and now leads Pratt & Whitney’s High Performance Computing (HPC) operations, says working there involves “solving very complex problems with some of the world’s most powerful computers. Our latest jet engine offers double-digit improvements in fuel burn and emissions, something that’s made possible through computer simulations. We optimize the performance of the product virtually, before we build it in real life.”

He says while the internship presented Doolittle with a steep learning curve, she “did an extremely effective job of seeking out the right people for information, not letting any obstacle stop her, and getting the job done. She helped us improve our ability to turn around designs quickly, which is very important for us to be competitive.”

Doolittle says the three months she spent at Pratt & Whitney completely exceeded her expectations. “It was just such a great experience, and people were so welcoming and friendly. I was always busy, and I felt like I actually made an impact, working side by side with top engineers and improving the methods more than 400 Pratt & Whitney engineers use to develop jet engines,” she says.

“Pete was great,” Doolittle adds. “Anytime I had questions, he took the time and was so thorough in his explanations. It helped me learn so much.” Doolittle has been invited back for another internship.

Davis, who recently joined Trinity’s Board of Trustees, says that as an alumna and UTC executive, she is excited to have the chance to let Trinity students know about opportunities at her company. “Being able to participate in something that can benefit Trinity and my employer, which has a large presence in the Hartford area, is very important to me,” she says.

At the same time, “it’s not me or anyone else creating these roles for these students. I give credit to the students themselves. They have terrific qualifications — and we have terrific assignments — so it’s a very logical opportunity for both of us.” 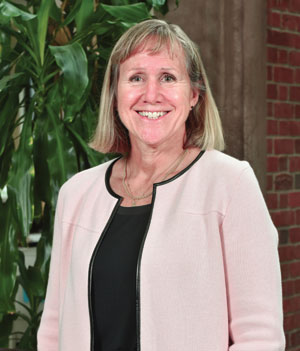 She also gives credit to Trinity for its tireless efforts to identify internships for its students and to facilitate introductions, as well as for offering a unique educational blend: “I think there’s tremendous benefit in a student having the opportunity to study STEM within a liberal arts environment, and Trinity is excellent at both.”

Davis, who majored in computer coordinate with engineering at Trinity, recalls that she not only studied the sciences but also economics, psychology, and writing. “Having that background and bringing it to the business world is something that benefited me greatly,” she says. Like Gong, she landed a job with UTC straight out of college. Bradley did the same, starting with Pratt as a software developer and architect. Both Davis and Bradley also earned master’s degrees from Rensselaer Polytechnic Institute.

J. Violet Gannon, director of Trinity’s CDC, says she and her staff start working with students in their first year to help them meet the needs of their future employers. “In the first year, we’re really dispelling the myths about what certain careers look like. In subsequent years, we look at the relationship between their major and the outcome they’re looking for.” Along the way, students learn to network, develop their brand, articulate their interests, and explain the value of a liberal arts education to potential employers.

The CDC also creates a variety of events that give Trinity students insight and access to outstanding companies, and this creates opportunities for these companies to find and hire top students.

“I think the beautiful thing about companies like UTC is that there are so many opportunities that hit on the students’ areas of interest: HR, marketing, engineering,” Gannon says. “We have students who are really talented in those domains, and we’re connecting them with opportunities to exercise and hone those skills. It’s a wonderful opportunity for them, especially since UTC is so close.”

She points out that alumni “play an instrumental role in helping students navigate a very complex organizational structure so they can get a foot in the door.”

As for Gong, she could hardly be more excited about beginning her career with such a prestigious company. “I’m so happy I found a job, and a great one at that,” she says. “My parents are very proud.”