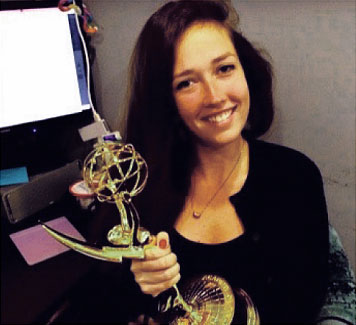 Rachael Burke ’15 was a senior at Trinity College when she was part of a team with The Tonight Show Starring Jimmy Fallon that earned an Emmy in 2014 for Outstanding Interactive Program. In 2015, Burke and The Tonight Show team were recognized again for their social media practices, this time in the category of Social TV Experience. Burke assists in all aspects of social media for the show, helping to create original content for Facebook, Twitter, Tumblr, Snapchat, YouTube, Vine, and more. Outside of the show, she acts in an improv group, #DTMO. At Trinity, Burke majored in film and television writing and production, while minoring in writing, rhetoric, and media arts. As a student, she interned on The Tonight Show and the Late Show with David Letterman before being hired by The Tonight Show. At Trinity, Burke also co-created and hosted a Trinity College Web series, Trinitea.