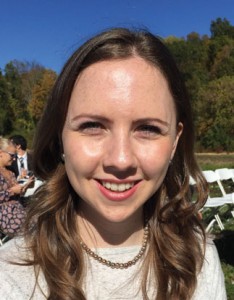 FAVORITE TRINITY MEMORY: I played on the women’s rugby team through most of college, which was great. Particularly fun were the Saturdays when both the men’s and women’s teams had home games because we spent the entire day out on the pitch watching each other’s games, grilling, and chatting with the visiting teams.

What do you do in your role at Glenn Horowitz? My day-to-day varies a lot, but my main role is to support the director, Lauren Miller Walsh, in setting up exhibitions and handling sales. The days before an exhibition opens, we are usually busy preparing a catalog and installing the show. On less busy days, I can be found updating our inventory database, looking for publicity opportunities, and working on research for the next exhibition. As soon as one show is up, we start on the next!

What drew you to this sort of work? I interned for Glenn Horowitz Bookseller after my sophomore year at Trinity, and I never really left. After my first summer as an intern, I continued to work part time with the company as a research assistant, and when I graduated, I was fortunate enough to be able to join the full-time staff. While still at Trinity, I sought out opportunities to become more involved with the book world, so naturally I turned to the Watkinson Library. The Watkinson’s head curator, Richard Ring, took me under his wing and taught me a great deal about the trade over weekly meetings.

What are your favorite parts of your job? The great thing about working for Glenn is the range and quality of materials we work with. We are a bookseller in name, but in practice we deal in research archives and artwork, too. Every exhibition and archive we work on is an opportunity to dive into a completely different world of research. Last May, we had an exhibition of “Constructivist Design for the Soviet Cinema” from the 1910s and ’20s, and just a few months later we exhibited materials focusing on New York City during the “Downtown Decade,” 1975-1985. Needless to say, we certainly never get bored.

How did your time at Trinity affect your career choice? I never thought I would be a religion major; I arrived at Trinity ready to go into psychology, and I completely switched gears my sophomore year when I took my first class in religion. While I didn’t pursue religion as a career per se, studying religion had a big impact on the way I approach research and analysis. Studying any religion requires at least an awareness of linguistics, archeology, geopolitics, and about 4,000 years of human history. It trained me to take a multidisciplinary approach to research, allowing me to learn those lessons while studying something I was fascinated by.

What was the most memorable course you took at Trinity? Why? “The History of the Book and the Bible,” with Professor Elukin. The class really connected many of the subjects I had been studying over the past few years. That semester I was working with Glenn part time, I was a creative fellow with the Watkinson Library studying bookbinding, and I was starting my thesis. I felt like my whole world was about books and religion, so having a seminar dedicated to connecting the two subjects was great.

Was there a Trinity professor who was particularly influential? If so, who was it, and why? My adviser, Professor Seth Sanders; after I took his “Introduction to the Hebrew Bible” course, I promptly became a religion major and started concentrating in biblical criticism. My academic career was really shaped by Professor Sanders. Before my junior year, he helped me find a Biblical Hebrew tutor in New York for the summer, and when I returned to campus in the fall, he supervised my Biblical Hebrew studies through an independent study. Under his direction, I completed a yearlong thesis, an analysis into the authorship of Genesis and Exodus, which we have plans to expand into an interactive online resource for undergraduate Bible students.