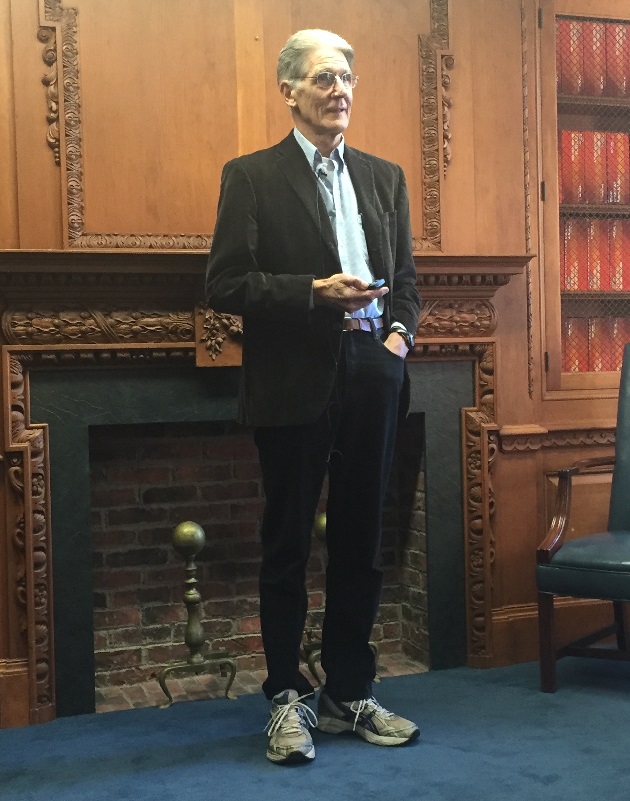 A member of the Trinity faculty for more than 30 years, Professor of Computer Science Ralph Morelli has watched the age of personal computing unfold and the speed of its evolution increase with each passing year. Enriched annually with a flood of new information, his courses have been a chronicle of that evolution.

Most recently his interest has been on mobile computing. Five years ago, he led a team of Trinity faculty and students to Haiti to build an open source mobile application to assist a humanitarian aid organization there. Since 2013, he has served as principal investigator for an innovative National Science Foundation-funded initiative called Mobile CSP, which trains high school teachers to teach an emerging AP Computer Science Principles course being created by the College Board.

The course he taught in the fall of 2015, called “Mobile Computing with App Inventor,” benefited from this experience. With expectations for Mobile CSP running high, Morelli expected a positive reception when he offered the course. But in his most optimistic state of mind he could not have anticipated the several thousand students who signed up.

Morelli’s course was one of the first two offered by Trinity professors via edX, one of the world’s foremost online course platforms. The platform was developed four years ago by MIT and Harvard and quickly adopted by many of the nation’s most prominent universities. Trinity’s partnership with it, TrinityX, began last spring.

When the partnership was announced, President Joanne Berger-Sweeney declared that it “offers tremendous opportunities for us to expand our outreach and showcase the outstanding quality of instruction at Trinity.” She added, “TrinityX will undoubtedly allow us to reach broader audiences while, at the same time, influence the use of educational technology on our campus.”

The College, which compensates edX for hosting its courses, plans to use TrinityX to offer both MOOCs (massive open online courses, available at no cost to any interested participant worldwide) and SPOCs (small private online courses whose closed enrollment structure targets specific audiences, such as alumni or prospective students who wish to sample Trinity course offerings). In fact, says Melanie Stein, interim dean of the faculty and professor of mathematics, Trinity’s goals are very broad.

“Trinity is always experimenting with education,” says Stein. “This is one of those experiments. We looked at the proliferation of MOOCs on various platforms and wondered ‘How can we be part of that, and how can it be useful?’

“We wanted to develop our own technological experience and expertise,” she adds. “We wanted to get the Trinity name out there and broaden our exposure. And we wanted to ensure great variety in what each course was achieving.”

If those are the measuring sticks, then TrinityX, after two semesters, is already a resounding success. 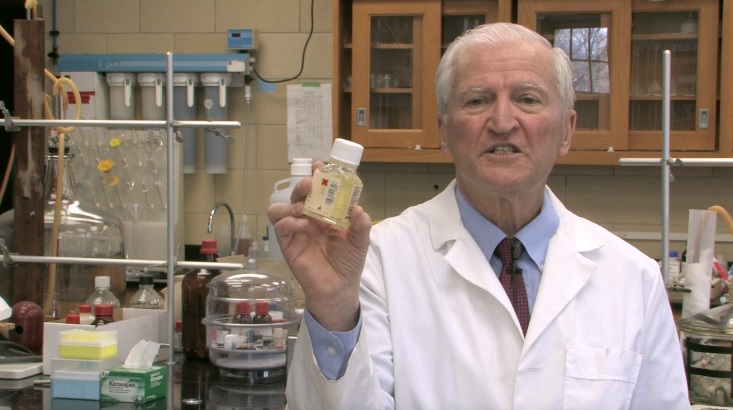 To get the project off the ground, the College assembled a committee comprising Stein; Suzanne Aber, vice president for information services and chief information officer; Jason Jones, director of educational technology; Erin Valentino, head librarian, research education; and four faculty representatives, one each from Trinity’s Educational Policy Committee, Information Technology in Education Committee, Curriculum Committee, and Faculty Conference Committee. The first responsibility of this group was to review faculty proposals for MOOCs and to select a handful that would serve as “trial balloons.”

Faculty response was positive, and by the time the edX partnership was announced publicly, five proposed courses had been chosen. In addition to Morelli’s course, the others were “Science in Art: The Chemistry of Art Materials and Conservation,” with Henry DePhillips, professor of chemistry, emeritus; “Effective Strategies for Teaching Biology,” with Kathleen Archer, associate professor of biology; “The Conscious Mind — A Philosophical Road Trip,” with Dan Lloyd, Brownell Professor of Philosophy; and “Shaping the Supreme Court: Presidents and the Politics of Law,” with Kevin McMahon, John R. Reitemeyer Professor of Political Science, slated to be offered in spring 2017.

After initial planning meetings on campus, Aber and Jones traveled to Massachusetts to meet with representatives of edX and to learn how they would need to assist professors in developing content for TrinityX. “President Berger-Sweeney saw this as a way to expand our digital footprint, as well as a means to make our highly regarded liberal arts education more available,” says Aber. “To play a role in making it happen was quite an honor.” 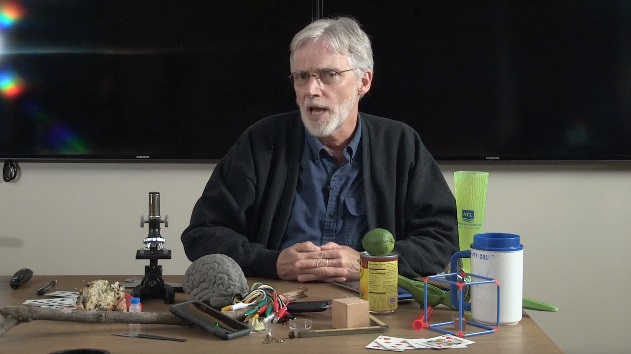 Then the hard part began. Though Morelli already had a MOOC offering similar material on Google since 2013, it was still necessary to design new graphics and online lectures for the edX course. And that task occupied the entire summer of 2015. “It was a tremendous amount of work,” he says. “I felt it was necessary to refine the Google content, make the lectures shorter, and make the course more hands-on for students.”

Keeping the lectures short and emphasizing hands-on activities are goals that edX strongly recommends, reflecting research conducted by the founding institutions. “It’s not as simple as recording professors’ in-class lectures and then posting them on the edX site,” explains Jones. “In general, edX data suggest students won’t watch much longer than four to six minutes. So it was up to us to tightly edit content. We worked with the professors closely on development and production of content, learning how to structure the courses for the edX platform as we worked.”

Despite the intense workload and the ambitious timetable, everyone who worked on the edX courses found the process exciting. “Once the course went live, I enjoyed it immensely,” says DePhillips, whose course also was offered last fall and attracted a large number of participants. “It was highly interdisciplinary, attracting both people interested in science and people interested in art. It was a very engaging group, and online dialogues were very interesting.”

In short order, the multiple values of Trinity’s edX partnership have begun to make themselves clear. One such value relates to the fact that Trinity is one of a small cluster of elite liberal arts colleges (Davidson, Wellesley, Hamilton, Colgate, Harvey Mudd, and Smith) partnering with edX. Expanding their collective capacity to learn from their work in the world of MOOCs, the seven have entered into a collaboration to share ideas and best practices and to brainstorm ways to make their work with edX more productive.

Another value is the platform’s highly adaptable option for educational experimentation. For instance, DePhillips took his online course afield from Trinity, conducting a video “field trip” to Hartford’s Wadsworth Atheneum so students could “meet” conservators there. 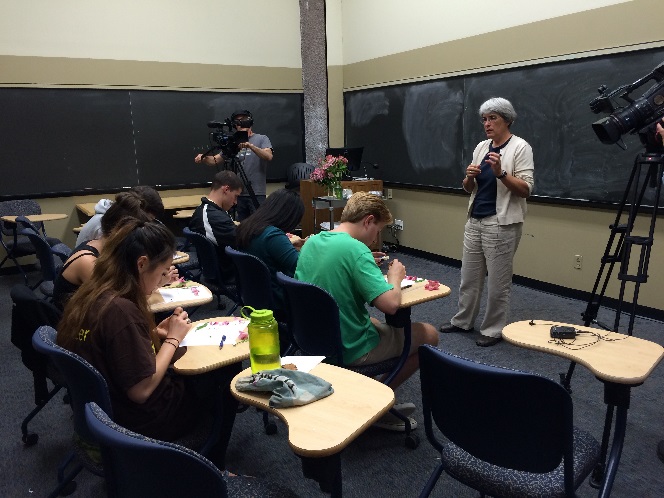 Archer’s spring 2016 class targeted a more narrowly defined audience, college and high school biology teachers, as well as graduate and postdoctoral students. Even so, it attracted nearly 1,500 registrants. And they, like the students in the other edX courses, represented more than 100 countries, all over the globe.

“I found there is a lot of interest in new teaching techniques,” says Archer. “It was especially gratifying because my audience was global in every sense. Only 20 percent of participants were from the United States.

“I gained a lot of technical knowledge about crafting the sort of short videos required for edX courses,” she adds. “Developing the course content afforded me an opportunity to reconsider how I use or could use such technology in the classroom.”

All of the professors agree that reframing for edX the kinds of courses they were accustomed to teaching in classrooms was a powerful learning opportunity not only for their edX students but also for themselves.

For the first three weeks of the spring 2016 semester, Lloyd used his edX course as a form of homework, requiring his classroom students at Trinity to view it in preparation for class.

“It was really interesting,” says Los Angeles native Madison Hummer ’18, who took another course from Lloyd a year ago. “Usually the homework is text based or writing based. Here the edX course was highly visual and involved a lot of creative thinking. For me, it was a great way of learning.”

Illinois Scholar Pearson Probst ’18, of Wilmette, Illinois, concurs. “One of the things I most enjoyed about the edX content was all the activities and videos Professor Lloyd included,” he says. “The classes fly by. Plus they are always on the edX site, so you can watch them whenever you want. And lecture transcripts are downloadable. You can print them and make notes.”

Lloyd says he found the experience of developing his course enlightening. “It was an interesting mix of teaching and scholarship,” he says. “I was compelled to link ideas and consider how those ideas came across. It was a creative challenge. Bringing complex ideas to a broad community is the core of both teaching and scholarship, and, for the MOOC, the community is global.”

For more information on TrinityX and to register for courses, please visit http://www.trincoll.edu/Academics/TrinityX/ or visit the Trinity College page on the edX site.