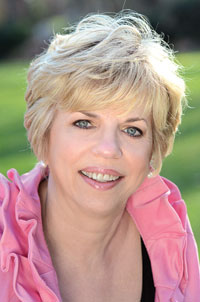 In March of her senior year at Trinity, Jan Larsson ’77, P’18 panicked. A computer coordinate major with a concentration in biology, Larsson had been accepted into the graduate program in biomedical engineering at Duke University but suddenly realized she didn’t want to be an engineer. She consulted her longtime adviser and mentor, Joseph Bronzino, who retired in 2010 as the Vernon D. Roosa Professor of Applied Science, Emeritus. He suggested she pursue health administration instead. Larsson reapplied and was accepted, earning her master’s degree from Duke in 1979. “The rigor of the math and computer courses at Trinity taught me to think critically, so making the transition into the business environment was easy.”

In many respects, this story reflects two things about Trinity that Larsson holds dear — the power of education and the importance of relationships — concepts that Larsson has sought to honor as a business leader as well as a supporter of the College.

The child of Swedish immigrants, Larsson was the first person in her immediate family to attend college. She visited Trinity, she says, out of respect and admiration for her high school math teacher, a graduate of the College, and when she walked onto campus, she felt she was home. That sense of connection continued for Larsson when she encountered Bronzino in a first-year seminar; he quickly became a role model. “I’m eternally grateful for Dr. Bronzino’s friendship,” she says. “His guidance was crucial — we’re still in touch.”

Today, Larsson serves as president and CEO of Versa Products Co., Inc., a privately held company started by her father and uncle in 1948. Versa valves are used by companies from Procter & Gamble to Caterpillar and are as easily found in North Sea oil rigs as in municipal water treatment plants. Larsson came to Versa in 1988 after a decade in health care administration, intent on addressing a few managerial issues and then returning to health care. Almost 30 years later, she’s still with the company. “The longer I stayed, the more I understood the business and loved the people.”

Larsson is equally dedicated to her alma mater, giving generously of her time and resources over the years. She chaired the first Trinity College Engineering Advisory Committee, formed by Professor of Engineering, Emeritus, David Ahlgren to secure accreditation for the College’s engineering program; served on the College’s Board of Fellows; and through Versa acts as the chief sponsor of Trinity’s International Robot Contest and the Dream Camp Engineering Internship Program. In 2008, she established the Larsson Family Scholarship Fund for Engineering, awarded each year to a rising junior or senior who has shown excellence in engineering as well as community service.

“Jan was my student as an undergraduate; she’s terrific — very capable and enthusiastic,” says Ahlgren. “She has consistently demonstrated an interest in science education and Trinity’s Engineering Department since graduating, and she also has a terrific social conscience. She’s deeply committed to passing the wealth of knowledge to the next generation and has been very generous in her support of educational initiatives at Trinity. She’s a great person and a great leader.”

Says Larsson, “I believe that Trinity is preparing people to be leaders in their fields, and as such our students have a responsibility to act with integrity and give back to the larger community. The more we can promote and recognize those who excel academically as well as in service to others, the better off we’ll be.

“The world is getting smaller all the time,” Larsson concludes, “and it’s imperative that we understand it from many different perspectives. Trinity cultivated my critical thinking skills and opened my mind to new ideas. I graduated with the skills to do whatever I desired, and I’m happy to play a role in giving the next generation those same opportunities.”