Book based on data from Trinity, six other institutions

Many people view the college experience as a neat, straight-line progression that carries teenagers into adulthood, providing professional development through a major course of study and personal enrichment through interactions with faculty and other students. But when the New England Consortium on Assessment and Student Learning (NECASL) conducted an innovative, five-year student assessment initiative, it arrived at a markedly different conclusion. A liberal arts education, the consortium found, is a “messy, complicated, ambiguous process,” and that, it argued, is precisely as it should be. Learning takes place outside the classroom as well as within it, the study confirmed, and selecting one’s roommate or social circle can be just as important as choosing one’s major. The myriad choices that students make over the course of their four years are important, the consortium found, and the more that students can view these decisions as opportunities rather than obstacles, the better off they will be. “Students don’t just start college and then finish it,” study leaders concluded. “They start and then restart college many times.” 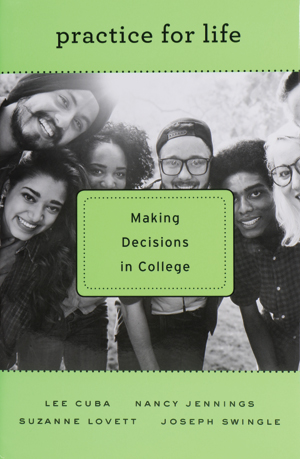 From the outset, the consortium, according to the book, sought to undertake a new approach to student assessment, one that entailed a deep dive into the experiences of college students as they were occurring, with the goal of identifying “ ‘best,’ or at least better, practices and policies” and suggesting reforms that could be shared among participating institutions. In order to gather the data that would inform its findings, NECASL assembled academic administrators, institutional research staff, faculty, and students from seven residential liberal arts colleges in New England: Bates, Bowdoin, Colby, Middlebury, Smith, Trinity, and Wellesley. The consortium initially secured funding from the Teagle Foundation (and later from the Spencer and the Andrew W. Mellon Foundations) and identified on-site leadership teams — often a member of the institutional research office and a faculty member — to serve as NECASL liaisons and to oversee the project on their respective campuses.

Trinity was initially represented by then-Director of Institutional Research and Planning Kent Smith and Associate Professor of Psychology David Reuman. When Smith retired in May of 2010, his successor, James Hughes, stepped in as administrative liaison for the remainder of the project’s run. Reuman served as faculty representative through the summer of 2008, at which time former adjunct instructor Rachael Barlow took over the reins on the faculty side, overseeing the selection and training of student interviewers, the conducting and transcription of actual student interviews, and representation of Trinity at NECASL meetings.

Beginning in 2006 and for the next five years, more than 200 students from the Class of 2010 (approximately 36 at each institution) were interviewed up to 10 times: three times in their first year; two in each of their sophomore, junior, and senior years; and again one year after graduation. To gather an additional segment of information, selection of study participants was heavily weighted toward Asian American, African American, Latino/a, and international students, groups whose college experiences are less frequently studied. Those responsible for conducting the interviews were students as well, a cadre of upper-year students from the participating institutions who received special training in qualitative interviewing prior to starting the project.

At the study’s conclusion, four consortium members — Wellesley Professor of Sociology and principal investigator Lee Cuba; Bowdoin Associate Professor of Education, Emerita, Nancy Jennings; Bowdoin Associate Professor of Psychology Suzanne Lovett; and Wellesley Senior Lecturer in Sociology Joseph Swingle — distilled the group’s findings into an engaging read, titled Practice for Life: Making Decisions in College, released by Harvard University Press in August 2016. The pages are filled with student voices and offer a unique resource, not only to faculty and administrators but also to students and parents who seek to realize the full value of a liberal arts education.

Attaining such an education is a process, the authors explain, a journey that centers “on becoming rather than achieving.” Guided by hundreds of hours of student interviews, the authors identified five areas of decision-making in college that offer students practice in this transformation: time, connection, home, advice, and engagement. Time plays an important role as students seek to balance planning for their future with living in the moment. Connection is vital to students navigating the social challenges and opportunities inherent to their new environment — making new friends and forging the social connections that can foster personal and professional growth in ways quite different from classroom learning. Home takes on new meaning as students strive to define their own space, both physically and psychologically. Advice is critical as students interact with faculty advisers and seek to navigate this dynamic and constantly evolving relationship. And finally, engagement is subjective and particular, as students respond to various courses, assignments, professors, and pedagogies over the course of their four years.

In launching the study, investigators sought to get academic administrators thinking more broadly about academic assessment, Cuba explains. In light of preliminary feedback, it appears that the group succeeded. For example, Lovett reports that “based on what we were learning from the interviews, we started making changes to the advising program at Bowdoin while the study was still in progress. Study participants held annual meetings on campus each spring in which we shared our findings with student affairs, academic deans, faculty, and others, and many changes were implemented to our programs both formally and informally.” And this sharing continues; co-authors Cuba and Jennings presented some of their findings at Trinity’s Center for Teaching and Learning in September 2016.

Nor was the impact of the study confined to college faculty and administrators. Trinity alumnus Jesse Wanzer ’08 — today a teacher at the Expeditionary Learning Academy at Moylan School in Hartford, Connecticut — was one of Trinity’s student interviewers during his junior and senior years and found the experience both affirming and eye-opening. “I interviewed eight to ten students from a variety of backgrounds over the course of two years, and I was amazed at how closely their experiences followed mine. There’s definitely a sort of socioeconomic divide at Trinity that must be dealt with — I experienced it — and it was interesting to hear how others handled the issue.” Wanzer was so moved by what he learned that he chose the topic for his senior thesis: “Understanding Diversity at Trinity College: First-Year Student Perspectives Related to Academic and Social Outcomes.” “I discovered that there was a marked discrepancy between what diversity meant to students at Trinity and what it meant to the administration,” he says.

Concludes Reuman, “I believe that this project is central to understanding a liberal arts education and the nuances of the student experience in college, and gaining that understanding is good for everyone: students, faculty, and administrators. It forces us to ask what we need to do to be successful in providing a liberal education — in classes, in curricula, and in residential life. This project clearly demonstrates that, in the end, the ‘college climate’ is not just an academic issue.”

For insight on Practice for Life from Jason Jones, Trinity’s director of educational technology, please read his entry on The Chronicle of Higher Education’s ProfHacker blog.