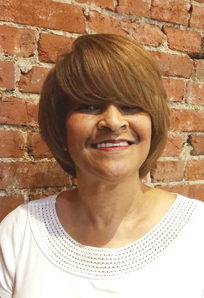 FAVORITE TRINITY MEMORY: A number of experiences come to mind. Eating clam chowder at Friendly’s is one. I thought the Cave was a pretty cool place to hang out. I like to people watch, so it was a great place to watch students and faculty coming and going. I had never eaten English muffins before coming to Hartford, and the Cave had the best English muffins with grape jelly ever! Trips to New York City are also among my most memorable experiences. I remember I could not wait to go back home and tell everybody I had ridden the subways, visited the Apollo Theater, stood on the corner of 125th Street and Lenox Avenue in Harlem, and, yes, shopped at Bloomingdale’s. I felt you could not get much better than that!

What is the purpose of the Innovative Concept Academy?
The Innovative Concept Academy, a first-of-its-kind school, was founded by the Honorable Jimmie M. Edwards in the fall of 2009 in St. Louis, Missouri. From 2007 to 2012, Edwards served as administrative judge of the family court. As one of the senior members of the circuit bench in St. Louis, Edwards was more than familiar with the issues surrounding urban crime and violence. Frustrated by the rising number of high school dropouts with no job skills, he created an innovative type of school that could educate and supervise the court’s juvenile offenders. ICA students, most of whom have appeared in Edwards’s courtroom, receive a full curriculum of math, language arts, science, and history in a setting that is strict on discipline and security.

What drew you to teaching there? What do you enjoy most about your position?
The school district actually sent me to ICA in the fall of 2010. Having taught in the city schools for 10 years, I knew about ICA and the work that Edwards was doing in the community. As an inner-city public school teacher, you quickly learn the daily challenges of oversized classrooms, limited resources, students at risk for academic failure, etc. In many ways, ICA was no different. However, because of the small class sizes, usually averaging 8-15 students, I discovered that I could not only be an effective teacher but also could provide more one-on-one assistance to my students, which is what I believe they need. I have been able to do my best teaching here. I stress the importance of hard work and effort on a daily basis. In the front of my classroom, I have a sign that reads, “I believe in you!”

Was there a Trinity professor who was particularly influential?
Yes, that would be Jim Miller, without a doubt. Jim, whom I affectionately called “Miller,” was my major adviser. I was in the first-year class in 1972 when he first started teaching at Trinity. I always like to think we started together. I can remember my classes with him as if they were yesterday. I remember his presentations in class were so clear, so precise! I knew I was in the company of the best and the brightest. I believe I was able to graduate with honors and represent my department as a President’s Fellow largely because of his support.

What was the most memorable course you took at Trinity?
During the second semester of my first year, I registered for a math class called “Elements of Statistics.” That’s when I met Dr. Robert C. Stewart. I first learned to love math when I took algebra in ninth grade. When I started college, I was excited about taking more math classes. Stewart’s class was perhaps one of the most challenging math classes I had ever taken. I would often have questions about the problems, so I would go to Dr. Stewart’s office hours for assistance. I remember that when I would enter his office, he would look up with the brightest smile; I always got the warmest reception. A couple of years after I graduated, I was thumbing through a recent issue of The Trinity Reporter, and I saw that he had won the Brownell Prize for Teaching Excellence. I remember the article said that he had won with “an overwhelming response.” I could not believe that so many others were thinking the same thing I was!