Marissa Boyers Bluestine ’89 was a philosophy major who never took a class with legendary Professor of History Jack Chatfield. But that didn’t matter. He still managed to change the course of her life.

“I always wanted to be a doctor,” recalls Bluestine, who thought philosophy would be an interesting background for a career in medicine. The West Hartford native was equally focused on attending Trinity College. “I was a local girl. Trinity looked like it was out of central casting, and it had a terrific reputation.”

While she found her way to Trinity, medical school just wasn’t in the cards.

“I blame him,” Bluestine says with a laugh, recalling Chatfield’s influence in changing the direction of her life. “Jack was a marvelous mentor, always giving and thoughtful. Though I never took a class with him, he helped advise my thesis.”

That thesis — on nonviolence as a means of social change — was the result of becoming involved with planning a 1988 symposium on the Student Nonviolent Coordinating Committee (SNCC) that Chatfield organized at Trinity. A member of the SNCC himself, Chatfield was able to bring many 1960s civil rights activists to campus.

It was a pivotal moment for Bluestine, who began to think about ways she could “make a difference.” After graduating from Trinity, she moved to Philadelphia, where she spent two years working at a shelter and soup kitchen. She also joined the board of the National Coalition for the Homeless.

In 1992, she decided that a law degree would allow her to tackle housing and poverty issues on a larger scale, so she enrolled in Temple University’s law school. During a first-year criminal law class, she was volunteered to provide a closing argument in a mock criminal case. At the time, she thought to herself, “I could never defend these folks.” 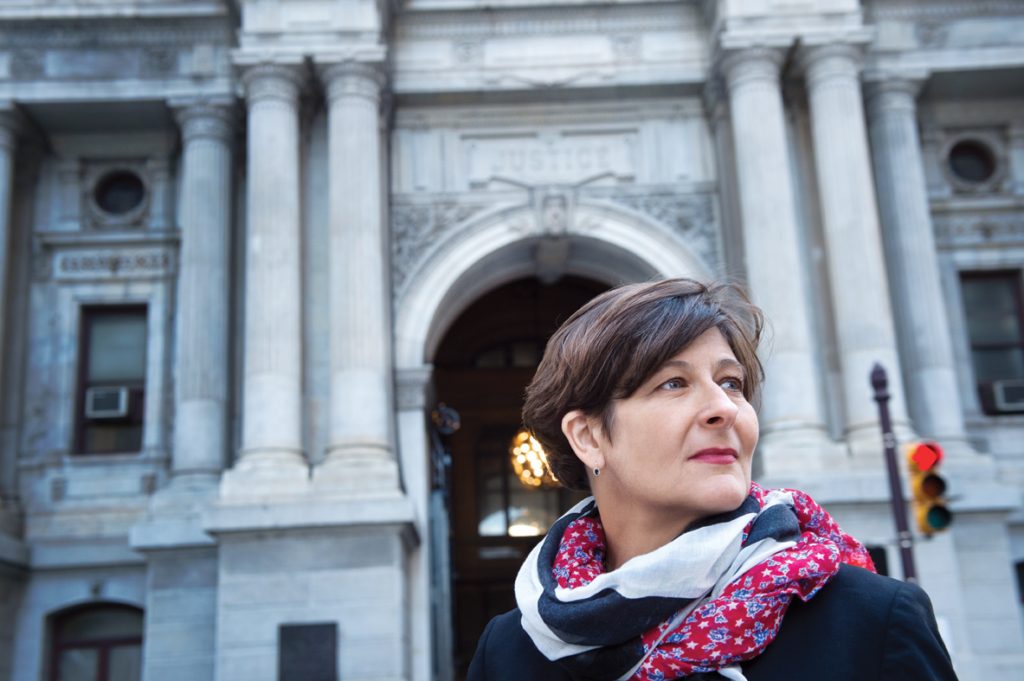 But an open mind, even in the face of her own strong opinions, once again shifted her direction. “During my third year of law school, I participated in a clinical program with the Defender Association of Philadelphia, handling DUIs, drug possession, and other types of crimes, and I fell in love with trial work.”

After she graduated, she became an assistant defender with the association. She then briefly tried a stint as a litigation associate at Duane Morris, but, she says, “When your pro bono hours start outpacing your billables, it’s probably not a good fit.” Though she “loved the firm,” she returned to criminal defense.

“I said, ‘Give me all of the cases that everyone else has thrown up on,’ ” she recalls of her time as a public defender. Though many of her clients were guilty of egregious crimes, she became increasingly frustrated by a criminal justice system that was “not keeping up with needs of defendants. Pennsylvania was the only state where we were not allowed to put up an expert to explain the vagaries of eyewitness IDs,” she explains. “Every other state allowed experts to explain what can go wrong with memory. We couldn’t argue that witnesses might be honest but not accurate.”

Bluestine became increasingly interested in wrongful convictions — though DNA exonerations were garnering significant press attention, she says that many other types of evidence, including expert testimony and eyewitness identifications, were not receiving the attention they deserved.

In 2009, Bluestine became the founding legal director of the Pennsylvania Innocence Project — a small, independent nonprofit not affiliated with the Innocence Project based in New York — which works to exonerate those convicted of crimes they did not commit and to prevent innocent people from being convicted. The project is supported by Temple University Beasley School of Law. Bluestine is quick to point out that the backing of fellow Trinity alumna JoAnne Epps ’73, who served as dean of the law school at that time and is now provost and executive vice president of Temple University, was crucial. “JoAnne’s support allowed us to literally launch the project,” says Bluestine.

Epps, who notes that law students from across the state — not just Temple — participate in the project’s work as part of a hands-on, clinical experience, says, “Marissa is easygoing and not strident, which I think is really wonderful given the critical nature of the work she does.

“Marissa has really come into her own as an advocate for people,” continues Epps. “She has not allowed her work to ever make her shrill. She’s an excellent lawyer and an excellent advocate for the cause. You don’t always get both of those in one person.” 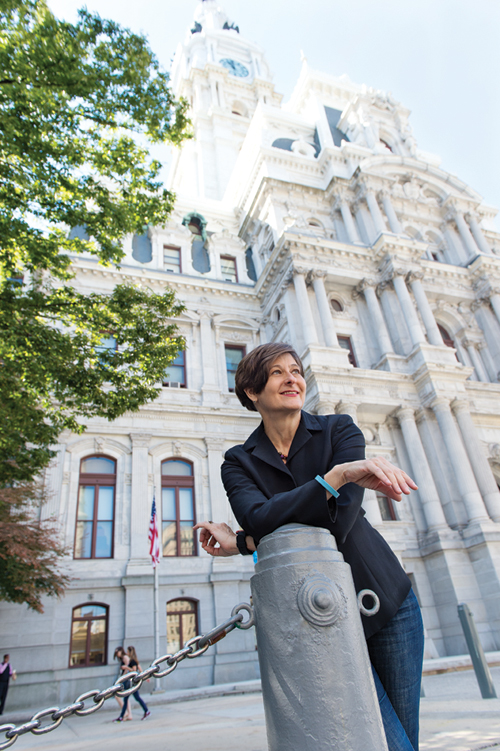 Epps’s nod to Bluestine’s adept lobbying for policy changes is well deserved. Among other honors, in 2013, Bluestine received the Philadelphia Bar Association’s Andrew Hamilton Award for Distinguished Service in Public Interest Law. Bluestine credits the Philadelphia Police Department as a partner in changing procedures to avoid incarcerating innocent people. “We have helped reform eyewitness ID procedures, and the police now record interrogations. We’re working on revising the wiretap law to allow for police body cams and recording interrogations statewide,” she says. “When we started, there was a lot of animosity, but now I’m contacted regularly by DAs and police to make policies and procedures better. There’s so much law enforcement is doing to be more professional and progressive.”

Over the past seven years, the project has received more than 3,500 inquiries from prisoners and has 27 cases currently in litigation. In total, six people have been exonerated, and two have had new trials granted as a result of the project’s efforts.

“Most people don’t realize how long it takes innocent people to get out of prison,” explains Bluestine. “There is a lot of opposition, resistance, barriers. I’ve never represented anyone that I didn’t feel 100 percent confident that I would welcome into my home, but I think [society] tends to define people by the crimes they were convicted of, whether they did it or not.”

In the end, it’s the moments of justice served that make the work so worthwhile for Bluestine. She recalls the case of Eugene Gilyard, convicted of a murder he did not commit and sentenced to life without parole at 19. “We met him 12 years into his sentence,” she recalls, “when he had almost given up hope of ever seeing freedom again.”

Bluestine and her team investigated his case, identified the person who actually committed the murder, and were able to file a petition to reverse Gilyard’s and his co-defendant’s convictions. “At the end, when the judge announced her decision from the bench, I was sitting behind Gene’s mom,” recalls Bluestine. “The judge ruled that Gene’s conviction could not stand and ordered it be vacated. While I absorbed that, Gene’s mother turned to her friend and said, ‘I have my son back.’ As the mother of a son myself, I could not imagine being separated from him for 15 days, much less 15 years.

“Later, when Gene came home, I was there,” continues Bluestine. “To see him reunited with his family and breathe freedom for the first time in 15 years was the most extraordinary experience.”