Studying the past with an eye toward the future

Is there anything new or practical to be learned from the ancient world? Could studying a “dead language” help you communicate? How does digging in the dirt help anyone become a doctor or a lawyer? Can discovering something about the past help you choose your own future? Why study classics?

For generations of students at Trinity College, the knowledge and skills acquired through courses in classical studies have led the way to a wide variety of careers.

Broadly defined as the study of ancient Greek and Roman civilization and culture, classical studies can expose students to a vast range of disciplines that touch on all aspects of the humanities, according to Gary Reger, Hobart Professor of Classical Languages. “Classics runs the gamut from the study of the languages themselves — particularly Greek and Latin — to the literature written in those languages,” Reger says. “It also involves the study of the history of the ancient periods, archeology and anthropology, political science and sociological approaches, the study of gender and sexuality in the Greek and Roman world, and even philosophy. Classics is, in many ways, a kind of model of what liberal arts is.”

One relatively new branch of this field is classical reception studies, which examines how literary tales and themes have been interpreted and reimagined since antiquity. Martha K. Risser, associate professor of classics, says, “This is one of the exciting directions the discipline as a whole is taking, and we here at Trinity are at the forefront of that.”

Reger adds, “Meredith Safran, a Latinist in the department, is working on a book on the way in which themes in classical mythology have been repurposed in modern day science fiction like Battlestar Galactica and Lost. The use of classical mythology themes and literary tropes is really widespread in modern-day culture and literature.”

Reger says that the study of classics gives students well-trained abilities to think critically, to work with incomplete evidence, and to be aware of the constraints on their abilities to draw conclusions. “In any kind of job that involves analysis, writing, or thinking,” he says, “those skills are going to be hugely beneficial.”

Melissa E. Moss ’92 completed a major in classics and a minor in mythology.  Now the chair of the Classics Department at the Williams School, an independent college preparatory day school in New London, Connecticut, Moss teaches Latin and ancient Greek to middle and upper school students. “I use what I learned at Trinity on a daily basis,” she says. “My experiences in classics courses taught me to think critically, to write well, to read critically. These skills that are necessary for discernment and success in any career path were honed in my training at Trinity.”

Moss is passing her passion for the subject to her own students, many of whom later tell her how classics courses have benefited their careers. “One former student, who is now a doctor, mentioned that knowing the various Latin declensions helped him to more easily understand the terminology he needed to know as a medical student,” Moss says.

Rob Witherwax ’98, who completed a double major in classics and history, is an attorney who says that skills he honed through classical studies have provided him with a strong foundation for his work in law. “Legal writing requires an immense vocabulary, a working knowledge of rhetorical devices, and a sense of precision and concision. When I am drafting a document, I am using the same mental muscles to put that document together that I used to take Cicero apart,” Witherwax says.

Trinity students have the opportunity to take a Summer Field School course at the Tel Akko Total Archaeology Project dig site in Israel. “Studying archaeology is a way of learning about our shared human and cultural past,” says Risser, who is a ceramicist for the project. “I think it makes that past more accessible and more tangible.”

Students also are encouraged to make connections between other subjects that interest them, Reger says. While doing just that, three classical studies majors received research grants last summer to pursue personalized projects from Hartford to Romania. “Classics is a relatively small department at Trinity, so to have three students out of our body of 25 majors apply for and get grants, that gives you a sense both of the quality of the work that they do and their own passion for the field,” Reger says.

Many classical studies students choose to double major and make use of courses that are cross-listed in two departments. Risser says, “Sometimes they’re surprised at how relevant their study of classics can be and how applicable it can be to economics, psychology, neuroscience, mathematics, and physics, and, of course, history, art history, English, modern languages, and political science.”

QuestBridge Scholar Joy Kim ’17 is pursuing majors in both urban studies and classical studies, with a concentration in ancient political philosophy. Kim, who plans to study law or theology after graduating this spring, sees a lot of overlap between her two majors. She says that she has learned about the foundations of American law by studying Greek philosophers and has developed an interest in policy relating to urban spaces. “You learn about urbanization in the classical era and the ideals of how to create a city and public spaces,” she says. No matter which career path Kim chooses, she plans to put her background in classics to good use. “It’s always helpful to study the roots of urbanization and the roots of western civilization,” she adds.

Among the alumni of Trinity’s Classical Studies Department are doctors, lawyers, stockbrokers, writers, mathematicians, and scientists, as well as Jami R. Cogswell and her twin sister, Darcy J. Cogswell, the valedictorian and salutatorian of the Class of 2016, respectively. Jami also completed a second major in mathematics, with a minor in Latin, and Darcy also completed a minor in history.

Jon Torodash ’04, a classics major who participated in the Guided Studies Program (now the Humanities Gateway Program), is a software developer. He believes that his studies developed the keen attention to detail that led him to his career. “The immense satisfaction in gaining a working ability to comprehend primary sources in their original glory, no matter how exhausting, left me with an impulse to seek out work that highly prizes mental acuity that improves with effort,” Torodash says. “Software design and implementation offers many career opportunities to have that.”

Now the director of admissions at Fordham Preparatory School in New York City, classics major Brad Serton ’99 believes that the experience he had working with professors in the small classes at Trinity was an important factor in his decision to pursue a career in education. “Besides developing critical thinking skills, my study of classics also helped me become a better writer,” Serton says. “Breaking down Greek and Latin texts on a regular basis was a great way to learn how to construct sentences and use words to my advantage.”

During his time at Trinity, Oscar Buitrago ’00 completed dual majors in classics and art history, along with a minor in Latin American studies. Today, he is associate director of business development for mergers and acquisitions at international law firm White & Case LLP. “During my studies of classics, I enjoyed translating speeches given to the senate,” Buitrago says. “While the translation portion was challenging, I appreciated the structure of the language and enjoyed learning how these historic figures used their presentation skills to persuade and influence. I was naturally drawn to the law right out of college.”

Trinity students, Buitrago believes, can benefit from classics courses for their entire lives. “There is an emphasis on enhancing your abilities to problem solve and develop your writing skills,” he says. “I use these skills every day and could not be more thankful for the foundation I was provided at Trinity.”

“It’s fascinating to learn the roots of our society and western civilization. And it’s entertaining; references are constantly made to classics in our society and in pop culture.” — QuestBridge Scholar Joy Kim ’17

“Studying classics teaches and continually reinforces rigorous, detailed focus. Classics, when taken seriously, can prepare you for everything. … You can study the legacy of antiquity in the ancient world to aid your foundational knowledge of just about every ‘practical’ direction you might take.” — Jon Torodash ’04

“The realization that there is truly nothing new under the sun, that we are fighting the same battles fought by Caesar and Pericles, that human relations are still as raw and primal as Aeschylus depicted, is a liberating one and, at the end, an optimistic one.” — Rob Witherwax ’98

“I think that the study of Ancient Greek politics, especially due to its influence on American democracy, is extremely valuable.” — Brad Serton ’99

“A classics major has always been considered essential for success in many professions, including law, science, as well as literary pursuits. This is even more relevant today as our fast-paced world demands fine-tuned writing and presentation skills, as well as the ability to problem solve.” — Oscar Buitrago ’00

“Learning Latin and Greek helps to train a person to read and think critically. One can learn so much about logic and order through the study of these languages and along the way so much vocabulary and grammar.” — Melissa E. Moss ’92

“It’s just fun; translating a thorny piece of Latin is like unraveling a complicated knot — incredibly frustrating until suddenly it’s not, and everything clicks into place.” — Maura Griffith ’17

“In ancient literature, you can see ancient sources establishing the same kind of values that we believe in today. … In archeology, material culture can show how much people haven’t changed over the past 5,000 or 10,000 years.” — Dylan Ingram ’18

“It’s important to have a grasp of basic mythology and ancient stories. Classical mythology is the basis of western literature. Once you know that, you can have a deeper appreciation of where modern literary themes come from.” — Matthew Reichelt ’17 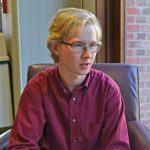 Dylan Ingram ’18, a classics and mathematics double major, received a 10-week Faculty Research Committee (FRC) Student Research Assistant Grant for his project, “Ceramics at Tel Akko.” Ingram helped Martha K. Risser, associate professor of classics, research specific aspects of Iron Age, Persian Period, and Hellenistic pottery found during archaeological excavations for a report that she and Jolanta Mlynarczyk of the University of Warsaw — the ceramicists for the Tel Akko archaeological project in Israel — will prepare for publication. “It’s kind of exciting to be able to dig in the dirt and learn about archeology,” says Ingram, a Donald L. McLagan Presidential Scholar. “My field work on the stamped handles of amphoras, or wine storage jugs, is very much tied in with the research I’m doing.” 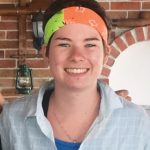 Maura Griffith ’17, who has created an interdisciplinary classics and biology major called archaeobiology, received a Trinity College Student Initiated Research Grant to attend a seven-week archaeological field school, which included three weeks of excavation and four weeks in a laboratory. She worked on a cemetery excavation in Patakfalva, Transylvania, Romania. “The site was a church from the 11th to 17th century. We excavated burials from outside the church walls,” Griffith says. “The project seeks to understand if the political and social upheaval in the region had an impact on the health of the individuals there.” 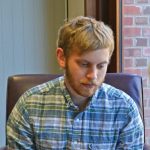 Matthew Reichelt ’17 spent much of the summer working with Gary Reger, Hobart Professor of Classical Languages, on an inscription of a letter sent by Septimius Severus in 197 C.E. in response to complaints about abuses that soldiers had been committing in Asia Minor. “Roman soldiers serving under Septimius Severus were torturing the local inhabitants,” says Reichelt, who received a 10-week FRC Student Research Assistant Grant. “Those inhabitants wrote to the emperor, and this inscription is the emperor’s response to the complaints. It’s basically saying that torture won’t happen anymore and that we will resolve this.”