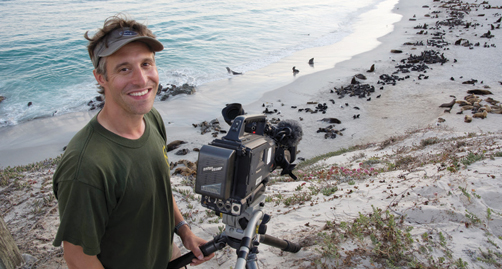 FAVORITE TRINITY MEMORY: Stroking the men’s lightweight crew through Boston in the 1997 Head of the Charles Regatta

How did you get started in your field?
In 1989, I spent the first half of eighth grade attending a British boarding school in Kenya while my mom trained Peace Corps volunteers. In our time off from work and school, we went on safari throughout the country, and this is when I really fell in love with nature and photography. I vowed to return to Africa to study wildlife, and as I pursued my B.S. in biology at Trinity, I spent my junior spring semester studying conservation and ecology in Botswana through SIT (School for International Training). As part of that program, I worked with a wildlife filmmaker and produced a photo documentary about the experience of filming white pelicans, Cape vultures, black eagles, and rock hyrax. I was hooked. At the time, there was no degree to pursue, so I began a career in biological fieldwork and continued developing my photography skills. In 2000, during my second season as a “coastwalker” (intertidal biologist and mapper) in Alaska’s Glacier Bay National Park, I met John Brooks, a filmmaker making an underwater film about the park. I volunteered on the project and grilled him on how I could follow in his footsteps. The timing was right because he gave me the inside scoop to pursue a new graduate program at Montana State University. I was accepted into the inaugural class of this M.F.A. program in science and natural history filmmaking and was one of the first three graduates in 2005. I hooked up with Brooks again, who was now making films for NOAA, the National Oceanic and Atmospheric Administration, and got my feet wet documenting two months of science in the five national marine sanctuaries along the Pacific coast while living onboard a NOAA ship. More opportunities with NOAA led to living and filming on the remote Pribilof Islands in the Bering Sea. This would become the foundation for my thesis film about the life history of northern fur seals and the naturalist who saved them from extinction, Henry Wood Elliott. I went from a student intern to a government contractor, and today I’m thrilled to make videos for the NOAA Fisheries Communications Office.

What do you enjoy most about your work?
Traveling, new experiences, and working with and telling stories about inspiring people, from scientists to fishermen, who work to protect and conserve our natural world. One of the notions that drew me to becoming a science filmmaker was the opportunity to not be a specialist in a particular field of science but to become a generalist in learning about science in varied and unique places and then reinforcing what I’ve learned through film narratives. With NOAA, I’ve found myself documenting a wide array of topics from the response to the Deepwater Horizon oil spill to diving face to face with Steller sea lions. I’ve filmed killer whale research near my home in Seattle and have been sent to all corners of the United States and its territories, from the Florida Keys to the Aleutian Islands, from Down East Maine to American Samoa. As I write this, I’m on a plane returning from Half Moon Bay, California, where I filmed a team of researchers who are tagging leatherback sea turtles.

How did your experience at Trinity help prepare you for what you do now?
What stands out to me is how intimate the education experience is. On one hand, I had constant access to my professors, and on the other, there was nowhere to hide. The latter, I think, was even more important in my development because I felt like it made me accountable and inspired me to work harder and succeed. I really respected my professors, and I wanted them to respect me, and I knew the harder I worked, the more I would get out of the whole experience.

Was there a professor who was particularly influential?
I felt like I had very good relationships with most of the biology faculty, from Blackburn to Galbraith, and Schneider to Smedley. But the professor who pushed me the hardest, and therefore inspired me the most, was Dr. Simmons. He not only demanded we know the details of the subject but that we speak in proper English. He would often reply “Balderdash!” or “Surely you jest!” if we pronounced zoology as zoo-ol-ogy instead of zo-ology. Despite the gruff exterior, he was a very generous man and made my Trinity experience truly unique.