While Christoph was in search of Cleopatra in Utah,  I accompanied Prof. Jeff Baylis from the History Department on a two week trip to Japan as part of the course:  Seismic Disasters in Japan, Then and Now: Earth, Environment and Culture.  The trip was attended by ENVS recent graduate Tori Shea (’15) as well as several other Trinity students from various departments.

The trip’s highlights included visits to various historic sites in Japan that have endured catastrophic natural disasters.  These disasters are deep reminders to the Japanese people of the fragility of life and everyday threat that goes with inhabiting this beautiful island.

In Tokyo we visited the museum and memorial of the Great Kanto earthquake of 1923, where 10s of thousands assembled in a park after the shaking only to be incinerated by the fires that engulfed the city. 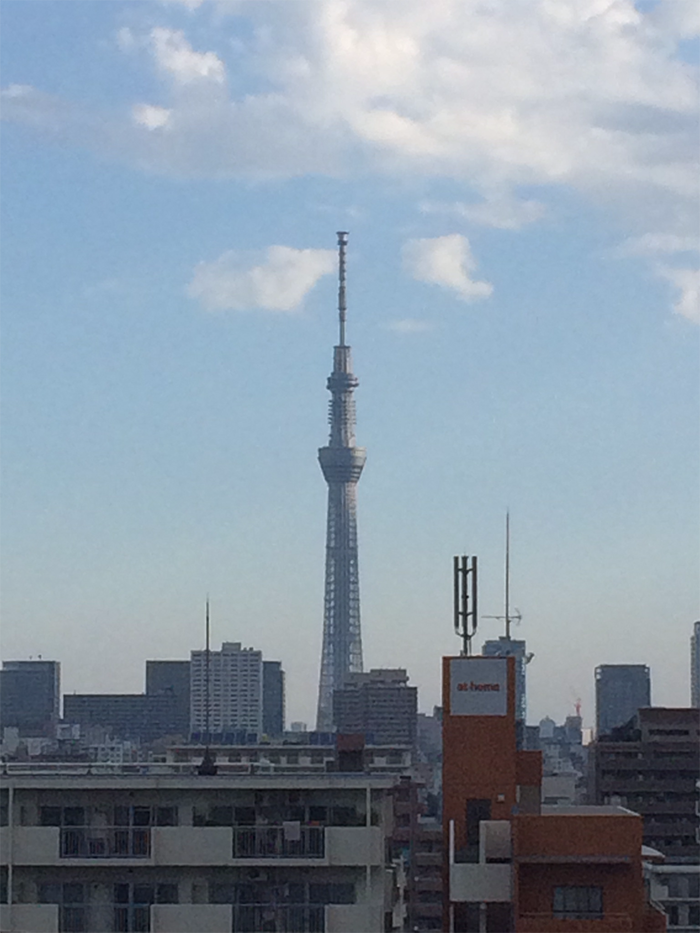 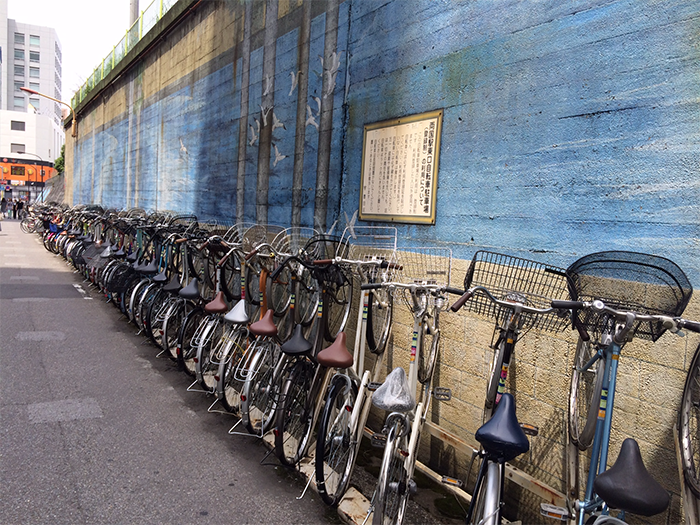 All lined up… typical neatness of Japanese culture.

Bullet trains were the preferred mode of transportation and we used our rail passes to visit the tourist town of Karuizawa, just west of Tokyo in the Japanese Alps. Karuizawa sits below the one of the most active volcanic regions in Japan, Mt. Asama.  Just prior to our arrival the threat level of the mountain had been increased and climbers were not allowed to be within 200 meters of the crater due to gaseous emissions.  We spent one day hiking on Mt. Asama and made it to the first emergency shelter before we had to head back down.  Before leaving the Asama region we also visited the village of Tsumagoi that had been completed buried in the 1783 from a debris flow that started on Asama.  The village was rediscover in part during and excavation in the 1970s. 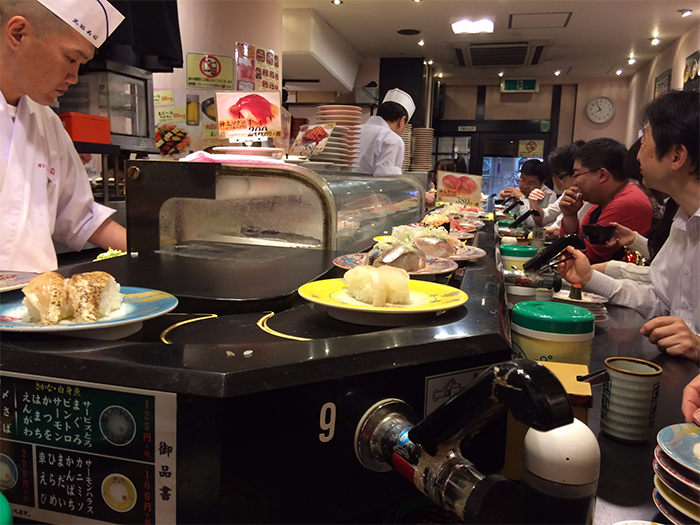 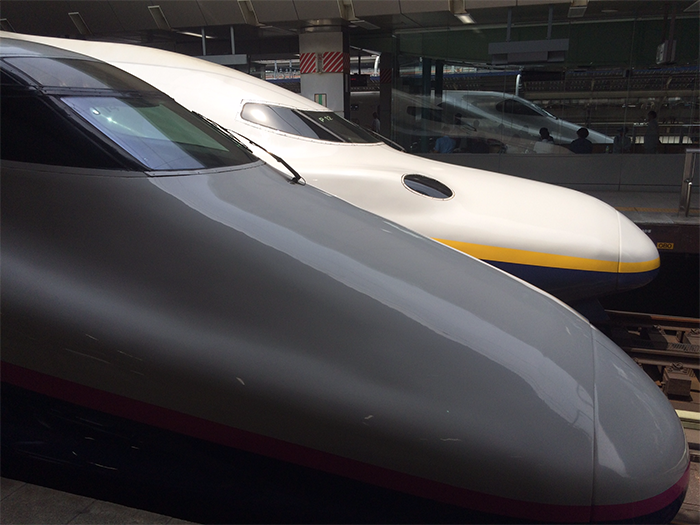 Waiting for our bullet train at Tokyo Station 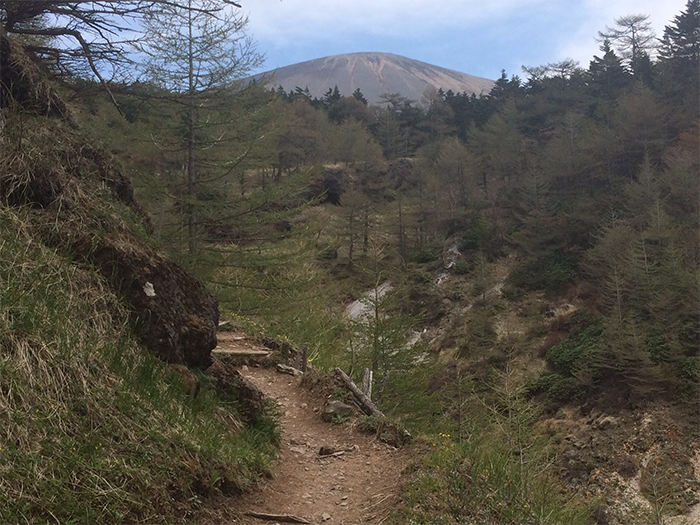 Back on the bullet train, we headed north to the region that was devastated by the 2011 great Honshu earthquake and tsunami.  While much of the clean-up for many of the cities , towns and villages has completed, the region is far from recovered.   No photo does the scope of the problem justice but a city that was one of the hardest hit, Rikuzentakata, is attempting to rebuild by literally moving mountains.  A giant rock crusher and conveyor system is moving earth material from adjacent hills and raising the ground level of the valley for future building.  The scene is surreal when one considers that the vast open valley once was a densely populated town.   It was sobering yet inspiring as to how the inhabitants of Rikukentakata are attempting to bring back their city. 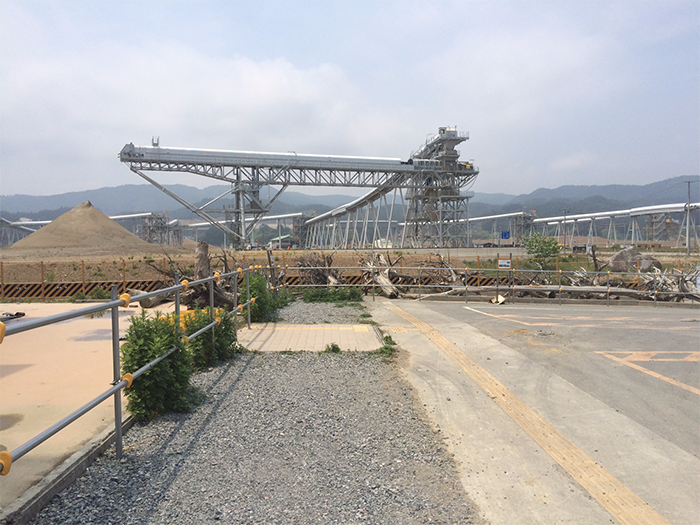 Conveyors bringing earth materials from mountains in the background.

We stayed most of time in the Honshu region at the Hotel Boyo in the fishing town of Kesannuma.  It was an especially important place during the tsunami because of its proximity on the hillside above the town.  It’s one of the few major buildings in town that was not destroyed during the tsunami and fires that ensued. The proprietor “Eddie” Eiichi Kato-san and his family had no choice but to open the hotel up as an emergency shelter in the aftermath of the disaster.  Kato-san was a wonderful host who shared his stories of the disasters (some were very difficult for him to tell) and despite the horror of the event he has an incredible outlook on life now.  He told me that since the disaster he has met extraordinary people from all around the world.  From the volunteers that came in the initial weeks and months after the tsunami, to the people who (Like our group) that come now to Kesannuma to learn about what happened and how the region is rebuilding, he is optimistic that the Kesannuma’s best days are yet to come. 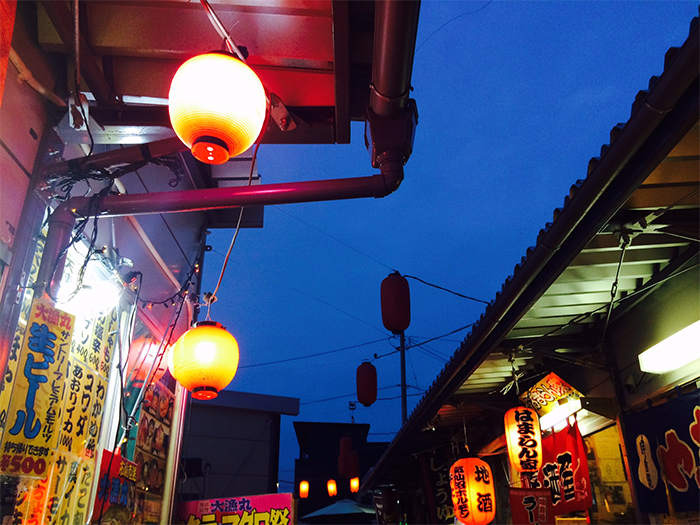 Temporary structures in Kesennuma to allow restaurant and shop owners to stay open for business.

A meal so grand it needed a panoramic. Trinity students enjoy a feast from the Kato family at Hotel Boyo. 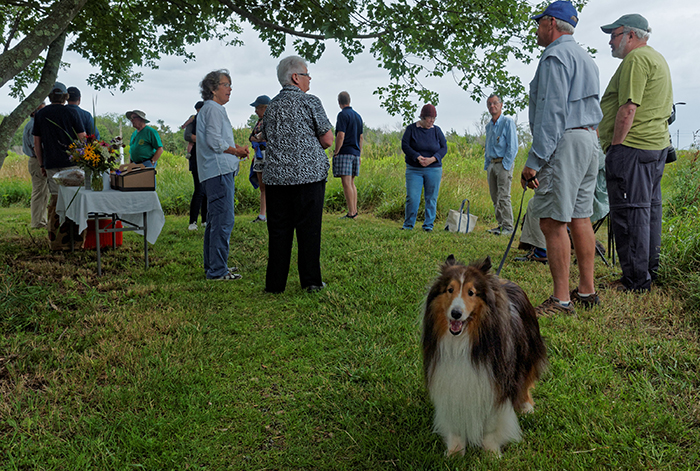 Gathering at the Knox Preserve under the watchful eye of several ferocious guard dogs.

Members of the Avalonia Land Conservancy and Trinity’s ENVS program spent Saturday morning at the Knox Preserve in Stonington, CT to unveil four interpretative signs that outline the major habitats of the Knox Preserve. the signs were designed by Eunice Kimm (’14) as part of her integrating experience. During her senior year Eunice worked closely with Drs. Cameron Douglass and Joan Morrison, identifying and drawing birds that are common at the preserve and designing the signs. 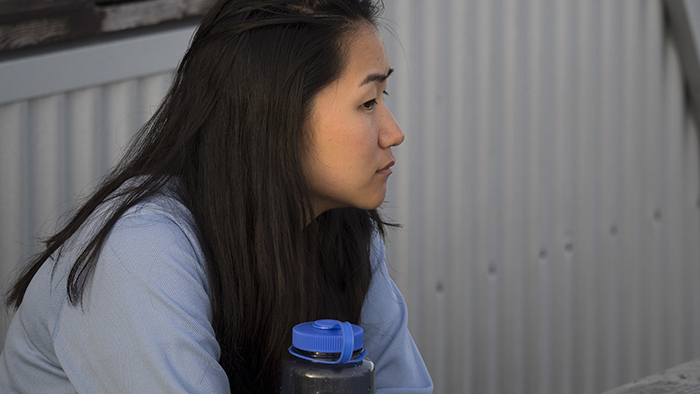 Eunice Kimm (’14) enjoying the sunset at Fimmvörðuháls in southern Iceland during our 2014 field trip to iceland.

The event started with lots of good food from the First and Last Bakery and a few short introductory statements by Beth Sullivan from the Avalonia Land Conservancy and Cameron Douglass from Trinity College. Beth thanked all the volunteers who help to maintain the preserve and  came out at the crack of dawn to install the signs. Cameron told us about the ecological value of the preserve, the Conservancy’s efforts to combat invasive species and, and Connectiut’s unofficial state plant. 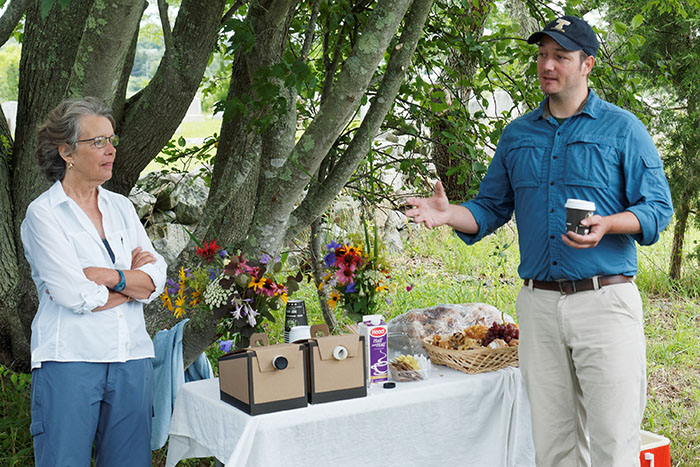 Beth Sullivan and Cameron Douglass (with borrowed hat!) standing between us and the coffee. :-(

The unveiling took only seconds (I almost missed it), but Cameron kept us entertained by introducing us to the various habitats and the management challenges associated with each. 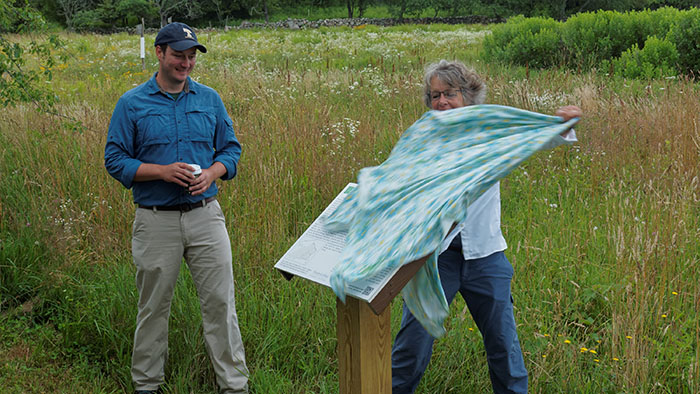 The moment of truth – no, don’t tell us about any typos!

We then went on a short walk through the preserve, learning about the history of the site and the ongoing research performed by Cameron, Joan and their students. 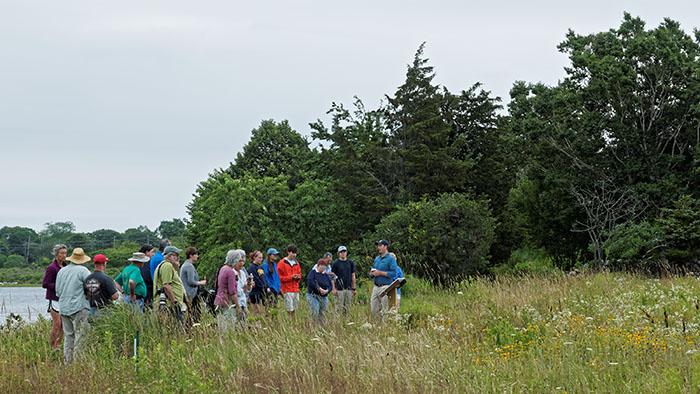 In the meadow part of the preserve. 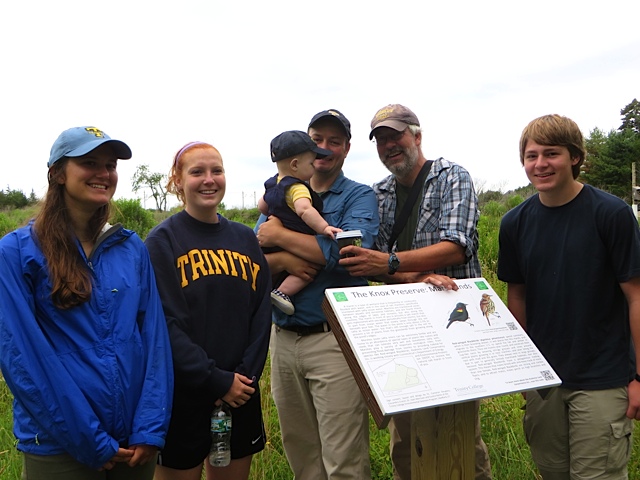 Trinity crew with one of Eunice’s signs. Sarah, Emily, Cameron with Parker (class of ’36), Christoph (luring Parker with some coffee), and saintly Preston (who still acts surprisingly normal after spending weeks with Cameron’s all-female research crew) 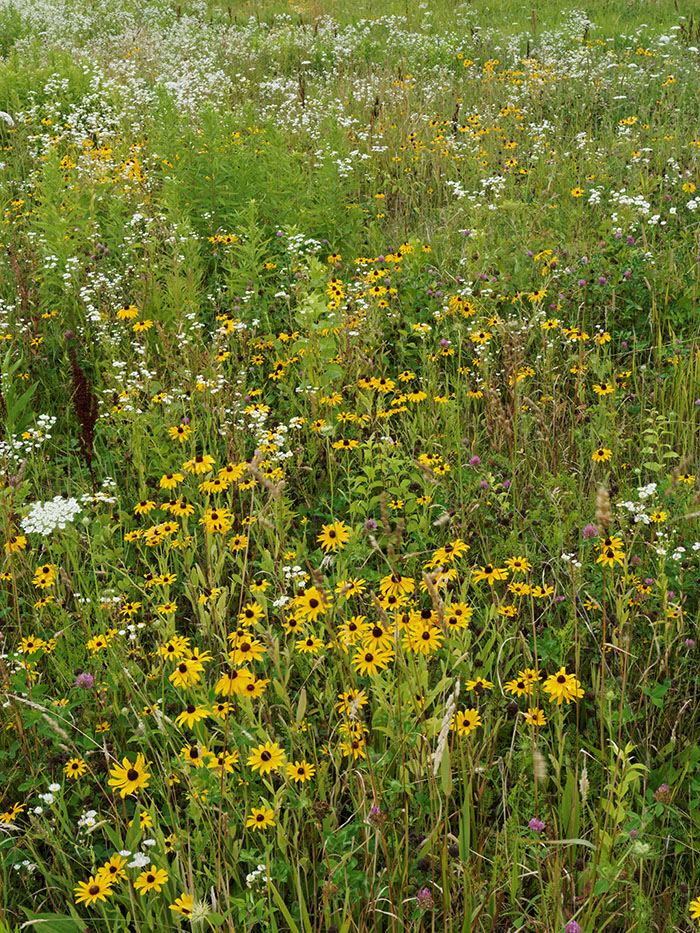 You can learn more about the Avalonia Land Conservancy and the Knox Preserve by visiting the Conservancy’s website or reading Beth Sullivan’s blog. You can see Eunice’s signs for yourself by visiting the preserve and hiking the trails. Directions to the site are here – just don’t mess with Cameron’s flagging tape!