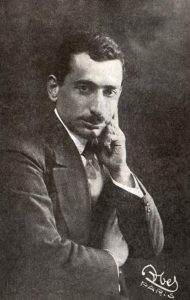 Akçam cited two potential historical sources that reveal the implication of the Ottoman government in the facilitation of the genocide. One of these are the records from Military Tribunals that were held in Istanbul in 1919-1921. These records were compiled by a commission to investigate crimes during World War II and consisted of depositions and sworn testimony from more than 60 trials against 200 defendants. Akçam posited that these records are missing, however, he noted that their existence is affirmed by their reference in many secondary sources.

The second source is Naim Effendi’s memoirs. Akçam focused the breadth of his discussion on these memoirs and their importance as a source of the events surrounding the genocide and their role in affirming the government’s involvement. Akçam thereafter went into great detail on the history of the memoir’s publisher, Aram Andonian (1875-1952), a prominent Armenian intellectual. Andonian obtained the memoirs through bribery, a common and well-documented practice in the concentration camps.

The memoirs contain ciphered telegrams from Talaat Pasha, a key perpetrator of the genocide, with such explicit descriptions as, in one from 22 September 1915, that “the order that all of the Armenian rights on Turkish soil, such as the rights to live and work, have been eliminated.” In another from Mahmot Kamil, it states that “those who have been hiding and maintaining Armenians in opposition to government orders to be hung in front of their properties have had their properties burned to the ground.”

The Turkish Historical Society denies the validity of the memoir. Akçam’s work has turned to refute the arguments advanced by the Society in its 1983 publication The Talaat Pasha Telegrams: Historical Fact or Armenian Fiction by Şinasi Orel and Süreyya Yuca. In this work, Orel and Yuca contended that “Effendi did not exist, that you cannot have a memoir for a nonexistent person, and that the telegrams are fake.”

Akçam presented evidence in his lecture of documents within the official Ottoman archives which inadvertently discredit all of the claims of the Turkish government. In one military archive released in 2007, Effendi’s name and signature exist in multiple documents, clearly rejecting two of their assertions.

To affirm the validity of the telegrams, Akçam turned to an Armenian country priest who had visited the Nubarian Library in Paris in the late 1950s. This library was directed by Andonian, the original publisher of the archives, from 1928-1952. After his death, Andonian had left his archives with original handwritten copies of the memoir and certain critical documents. These documents disappeared from the library sometime after the 1950s and have not resurfaced but, Akçam discovered, this priest had taken photographs of many of the records, thereby assuring their preservation.

With these documents and the commensurate records within the Ottoman archive, it became possible to definitively confute the assertions of the Turkish government and prove the validity of the memoirs. Akçam systematically went on to present examples from the archives in juxtaposition to the memoir to prove that things as minute as paper type and ciphered coding matched with official government practices. With these assertions, the only alternative argument is that the telegrams were deciphered incorrectly and, as Akçam suggests, the Turkish government’s “silence indicates their authenticity.” Akçam emphasized that “until we had access to the archive, we had to accept these arguments,” but now the archive itself disproves the government.

Fundamentally, Akçam argues brilliantly, “within the Ottoman archive, you can see that everything Niam wrote was true.” Akçam contends that the “Turkish government’s main arguments are simply wrong and, if they want to deny the authenticity of this memoir, they simply must publish the coding books.” Indeed, Akçam hopes that this exposure will engender “a change in Armenian genocide research and, at least, a change in the strategy of denials.”