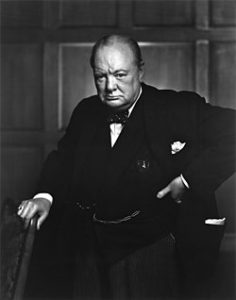 The Trinity College History Department had the pleasure of receiving a visit from Richard Toye, Professor and Department Head of History at the University of Exeter, on Thursday, February 22. Professor Toye is a historian of Churchill and has a distinguished career, having written a number of publications including Lloyd George and Churchill: Rivals for Greatness, Churchill’s Empire: The World That Made Him and the World He Made, The Roar of the Lion: The Untold Story of Churchill’s World War II Speeches, and Rhetoric: A Very Short Introduction.

In his lecture, Toye challenged us to consider other factors that influenced the decisions of Churchill’s rhetoric. One of the first factors Toye examined was the structure of the House of Commons chamber itself. In 1941, the house was bombed during the Blitz and a fervor developed over whether or not the chamber should be reconstructed. Toye described the importance of the original design to Churchill, noting that Churchill found the American rotunda design “fatal to democracy.” The intimacy of the chamber and its ability to facilitate the conversational style, which Churchill himself advanced, was critical to the Parliamentary tradition within Britain.

However, Toye notes that Churchill remained in an uphill political battle for much of this early period of the war and his ability to act was largely stifled by the Conservative division between those still loyal to the former Prime Minister Neville Chamberlain. Toye emphasized that it was his “Oran” speech in the summer of 1940 that solidified his political position and united the Chamberlain Conservatives behind his agenda.

Toye also examined the early rhetorical style of Churchill, remarking on his original “habit of memorizing speeches” during his early service. In 1904, Churchill forgot a portion of his speech and thereafter relied upon notes for all future speeches. Later, however, Churchill adopted a conversational approach in the 1930s, for which he became known, and remarked to his wife in a 1935 letter on the delight which came from his use of a “garrulous unpremeditated flow.”

Again, Toye returns to noting that it was the structure of the Commons chamber, with its intimacy and adversarial structure, which allowed for the development of Churchill’s conversational discourse. At times, this intimacy seemed to belie Churchill’s leadership, as Toye notes that some in the House felt that his “vituperative rhetoric” was too excessive, especially in his references to “corporal Hitler.”

Toye also directs our attention to the outside influences and societal views which characterized the public understanding of the Commons during World War II. In presenting a Report on the Faith in Parliament by the British social research organization Mass Observation. Toye presents some excerpts from the report, including one women who notes that “the only interests I take is when Mr. Churchill gives a speech or a summing up of a special situation” and another individual’s opinion that “Churchill should have gone first” in reference to debate order.

In this realm, Toye suggests that Churchill’s rhetoric served as a sort of moral authority within the public sphere. Conversely, Toye also touched upon Churchill’s disdain for newspapers, noting his desire to shut down The Daily Mirror and his hatred of “lobby talk.” Toye concludes that Churchill’s greatest contribution in his rhetorical approach was in his recognition that the House of Commons was “a place where power resided” and that it was “worth the effort” to promote a return to an emphasis on Commons debate.

Indeed, Churchill’s rhetoric was shaped within the context of increasing state power, a changing Commons style, and a fundamental shift in the public understanding of the role of the Commons. It is within this changing world that Churchill existed and, as Toye reminds us, we cannot allow our understanding of rhetoric “to be reduced simply to a search for tropes.” Rather, Toye challenges us to “pay attention to the Constitutional forms” and other factors which contemporaneously influence and are influenced by rhetoric.

In this way, we are also challenged to consider the means whereby rhetoric not only influences policy, but drives changes in those with the ability to shape policy. Toye brilliantly reminds us to consider how the power of rhetoric can unseat a government and, with the institution of a new minister, fundamentally, alter the laws of Britain. With that, Toye leaves us to ponder the curiously immutable and reverential power of rhetoric.