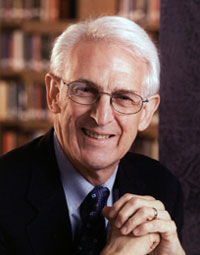 Following Trinity, Painter was ordained in the Episcopal church, received his M.A. and P.H.D. from Yale University, and received his Masters of Divinity from General Theological Seminary. Painter was later hired to teach part time at Trinity and, with the encouragement of former colleague George Cooper, moved into teaching full time in 1966.

While at Trinity, Painter was also called to serve as interim Dean of the Faculty from 1984-1987, as interim president from 1994-1995, and as interim president from 2003-2004. Painter added that although he “does not know if he would ever have wanted these positions long-term, they were a wonderful learning experience.” Following his retirement in 2004, Trinity officially recognized Painter as the 20th President of the College.

Painter continues to remain active in the Trinity community, especially through his involvement with the Friends of the Chapel, where he credits Chaplain Allison Read with “settling in and embracing the role” and added that he is always “happy to help out.”

Painter’s advice for students and the college is to understand that Trinity is a “culmination of continuity and change” and that the college must “embrace that change” to be successful. With this, Painter added that it is critical that the “close relationship between faculty and students” as well as the faculty relationship between “teaching and scholarship” be maintained, as they are key assets for Trinity.

Lastly, for students Painter stressed that you should “major what you really want to major in” while taking a “good mix of courses.” This, added Painter, is the “bread and butter value of a liberal arts education.” It is truly impossible to recount in one article the extent of Painter’s contributions to Trinity. Indeed, the extent of his dedication to Trinity is reflected in his heeding the calls to serve wherever needed for the good of Trinity and his continued leadership in one of its most enduring features, the Chapel.