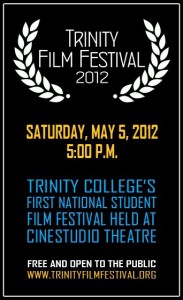 “The festival will be held on May 5th at the nationally acclaimed Cinestudio Theater (cinestudio.org) on the campus of Trinity College. For over 40 years, Cinestudio has promoted the art of film at Trinity and in the greater Hartford area. Adopting this same spirit, the Trinity Film Festival seeks to bring together student filmmakers from the northeast and all over the country to receive the opportunity to meet fellow filmmakers and to premier their works on the big screen in front of a packed audience. Whether enrolled at a university with a large film program or one with no film program at all, we encourage undergraduate students to make short films and enter for the chance to see their films premiered in Cinestudio. An eclectic panel of filmmakers, professors, celebrities, and film enthusiasts will judge the films and award cash prizes to the winners. Ultimately, the audience will have the opportunity to vote on the grand prize winner. After the festival screenings, a red carpet awards banquet will be held for all to attend. Food and festivities will commence as the judges deliberate on the awards, culminating in the awards ceremony and a Q&A with the judges.” For more information go HERE.