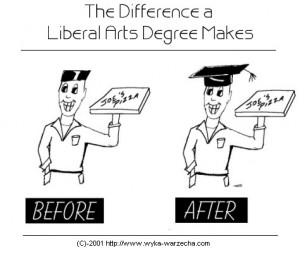 On May 1st, Prof. Greenberg engaged in a dialogue about the the merits of liberal arts education, which was published in the New York Times. Specifially it was a response to “The Imperiled Promise of College (April 29th, by Frank Bruni).

“While Frank Bruni is certainly right that college is too expensive and that we need more people to study science, math and engineering, I disagree with him about the lack of value of a humanities degree. Perhaps as a history professor at a liberal arts college, I am being defensive. But while a specific degree in communications or accounting may land you a well-paying job sooner, a liberal arts degree better equips students for the ever-changing job market they face. Many of the jobs today are in fields that hadn’t been invented 10 years ago. Most workers today will change not just jobs but careers several times in their lives. What does one need to succeed, even flourish, in such a market? The ability to think creatively, read critically, construct effective arguments using persuasive evidence, write clearly, remain flexible and look at issues with an open mind. These are skills taught best in broad liberal arts settings — even in majors like philosophy or zoology.”

One can still go on from a liberal arts base to become a teacher, a programmer or any other specialized professional, and probably be more effective thanks to those skills. And a liberal arts degree equips students with skills needed to be active world citizens, something important even for baristas.

So yes, let’s find ways to help more students gain access to higher education. But let’s not confuse first jobs with satisfying careers, or dumb down nursing, accounting or other fields by assuming that training, rather than education, is the best way to go.