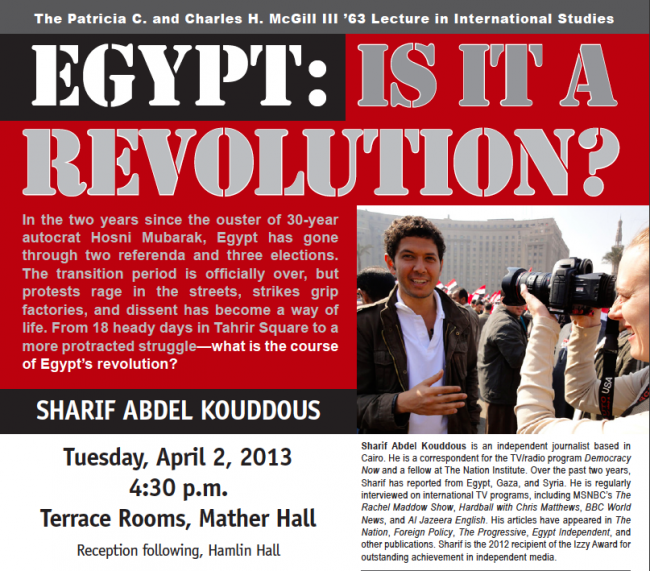 HARTFORD, CT, April 4, 2013 – “The 18 heady days of rebellion in Cairo’s Tahrir Square in January 2011 were filled with hope, promise and the expectation of a better life. But the events of the past two years have not unfolded as envisioned by the tens of thousands of Egyptians who took part in the Tahrir Square demonstrations that led to the ouster of longtime President Hosni Mubarak. ​Sharif Abdel Kouddous delivers the annual Patricia C. and Charles H. McGill III ’63 Lecture in International Studies. Those were among the major conclusions drawn by Sharif Abdel Kouddous, an independent Cairo-based journalist, who on Tuesday delivered the annual Patricia C. and Charles H. McGill III ’63 Lecture in International Studies in Mather Hall. Kouddous’ lecture was entitled, “Egypt: Is it a Revolution?” The overthrow of Mubarak, an autocrat who had been in power for three decades, was among the first of several uprisings in the Middle East that came to be known as the Arab Spring, and were thought to be the beginnings of democracy taking root in countries where dictatorships had long flourished. Indeed, in the immediate aftermath of Mubarak’s ouster, “foreigners would smile and congratulate me,” said Kouddous. “Today I get a much different reaction – a look of pity. People ask me, ‘What happened?’ Is the revolution over?’ What are the prospects fos for change?’” 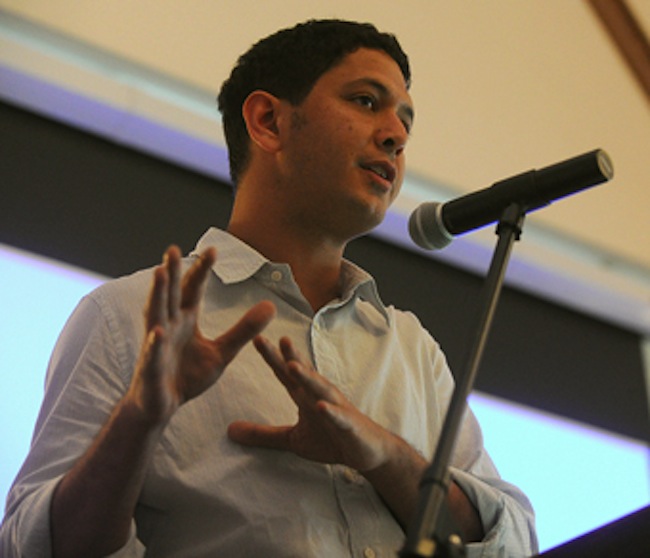 The McGill International Studies Fund was established in 1996 with a gift from Patricia C. and Charles H. McGill ’63. The gift helped secure matching grant from the National Endowment for the Humanities. The fund supports the appointment of visiting humanities scholars, primarily international scholars, in the academic areas of international studies that include African studies, Asian studies, Latin American studies, Middle Eastern studies, post-colonial studies, and Russia & Eurasia studies.