By SMM in American History, Awards, European History, Events on May 5, 2013. 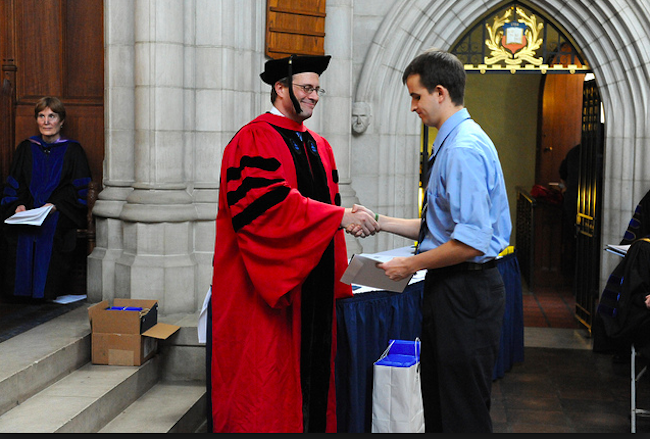 “HARTFORD, CT, May 3, 2013 – The Trinity College Chapel served as the site Friday, May 3 for the school’s 63rd annual Honors Day Ceremony in which more than 200 students were cited for their scholarly, athletic and community-oriented achievements. Some students were recognized more than once. The honorees, which included members of the Classes of 2013, ’14, ’15 and ’16, were presented with a broad array of prizes and awards for their contributions and accomplishments over the years. The ceremony originated when George Keith Funston, who served as Trinity College President from 1945 to 1951, sought to re-establish the school’s academic pageantry, which had been halted during World War II. Matriculation and the Book Ceremony for first-year students were restored, and in the spring of 1950, Honors Day was added as a new event. It was intended to be an occasion when all Trinity prizes and awards — with the exception of those handed out at Commencement – could be celebrated in the presence of the entire College community.” (source: http://www.trincoll.edu/NewsEvents/NewsArticles/pages/HonorsDay2013.aspx)

Congratulations to all of the following the history majors awarded prizes:

Emma Sternlof ’13 was awarded The Miles A. Tuttle Prize will be awarded to the member of the senior class who writes the best essay of at least 20 pages in length in history on a topic selected by the contestant and approved by the Department of History. Senior Seminar essays are eligible for the Tuttle competition. If, in the judgment of the department, no essay meets the standards of excellence, no prize will be awarded. The award was presented by Michael E. Lestz, Associate Professor of History. Emma’s thesis entitled, “History, Language, and Power: James Hammonod Trumbull’s Native American Scholarship.”

Duncan F. Grimm ’15 was awarded The George J. Mead Prize in History is awarded under the terms of a bequest from the late Mr. George J. Mead, Hon. ’37. It is awarded to an outstanding history major in the freshman or sophomore class. The award was presented by Mimi Patterson Mead IDP ’94.

Daniel W. Morgan (Class of ’13) was awarded The George B. Cooper Prize in British History was established by Dr. D. G. Brinton Thompson upon the retirement of Dr. George B. Cooper, Northam Professor Emeritus, to recognize Dr. Cooper’s distinguished career. It is awarded to the senior who has done the best work in British history at Trinity. The prize was presented by Jonathan Elukin, Associate Professor of History.

Daniel W. Morgan was also awarded the The Gerald A. McNamara Prize in History was stablished in 2013 by his wife, Ronnie, and daughter, Annie, in loving memory of Gerry McNamara ’62, who believed strongly in lifelong learning and the importance of active and vibrant scholarly debate. The McNamara Prize will be awarded to the student who, like Gerry, enlightened the classroom with
vigorous intellectual engagement and, last but not least, robust class participation. This award was presented by Jonathan Elukin, Associate Professor of History.