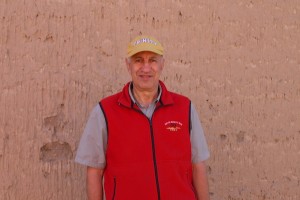 During last week’s Trinity reunion weekend, History Professor Michael Lestz was awarded the Alumni Medal for Excellence. This medal is awarded annually to alumni who have made significant contributions to their professions, to their communities, and to Trinity College. Congratulations Michael!

“You came to Trinity as a transfer student in the summer of 1964, and it was a stroke of good luck for the College that you did. Since your first days on campus, you have enriched this institution. You excelled as a student and after graduation emerged as a dedicated alumnus and one of Trinity College’s fine scholars and teachers.As an undergraduate, you won distinction in the classroom, on the playing field, and as a member of Delta Phi. A history major, you were consistently on the Dean’s List and worked as a student assistant in the History Department your senior year. You learned Russian and German and wrote a thesis that required you to master Serbo-Croatian as well. You lettered in cross-country and track and served as a Junior Adviser. As a senior, you won the Jerome Webster Student Book Prize and graduated cum laude and with honors in your major.

After Trinity, you earned master’s degrees from Yale in Asian Studies and were admitted into Yale’s graduate program in Chinese history. You gained a Ph.D. in Chinese history from Yale in 1982. In the meantime, you began teaching in Trinity’s History Department, first as an adjunct and then as a tenure track appointee following a national search in 1979. Your research is primarily focused on Republican China, and you have published widely on this and other subjects tied to Chinese history. You were a pioneer in understanding China’s fascination with the ideology of the radical right in the 1930’s and wrote several groundbreaking articles on this subject. In 1999, you were the principal author of The Search for Modern China: A Document Collection. You are currently chair of Trinity’s History Department, a position you have held since 2010 and also from 1997 to 2001. You have also served as the Secretary of the Faculty and chaired numerous faculty committees.

Your work has done much to promote Asian and international studies at the College. You spearheaded efforts to diversify the curriculum and won attention for many hitherto overlooked areas of study, including Latin America, Africa, the Middle East, and Chinese and Japanese language as the primary advocate for the addition of new faculty in those areas. The flourishing international curriculum that marks Trinity today is in large part result of painstaking efforts on your part.

In the area of study abroad, you were the first Trinity College faculty member to take Trinity students to Asia in credit-bearing study that you and later other faculty members of the College led. Your efforts in this regard, won philanthropic support and you were honored with appointment as director of the O’Neill Asia Cum Laude Endowment and the Charlotte Riggs Scholarship Fund. In the last five years, funds from these endowments have sponsored study projects designed by you and other Trinity faculty in China, Cambodia, Tibet, and Nepal. You were for several years the co-director of the Trinity College Himalayas Global Learning Site and led numerous treks and study expeditions in Nepal and Tibet. Early in your career, you served as the College’s Director of Asian Programs from 1999 to 2003. In 1990, you founded Trinity’s International Studies Program and served as its first director for five years.

International engagement is at the core of your being. You speak and read a range of Asian languages, including Chinese, Korean, and Khmer (which you taught yourself) and have mastered Spanish, French, and other languages as well. Most of the study of the languages was undertaken as you worked as a full-time faculty member at Trinity. You understand that language is the door that unlocks histories and cultures and have made it your aim to serve as a role model as you chat with undergraduates along the Long Walk in their native languages or languages that they are striving to master.

Last year you were the co-author of Trinity College’s successful grant to the Luce Foundation for support tied to summer programming in China. Together with Xiangming Chen and Joan Morrison, you designed the Megacities of the Yangtze River program that led Trinity students to China for four summers. You have also led programs in Cambodia and a primary text has been you new translation of Zhou Daguan’s 13th Record of Cambodia. You are unable to be with us today because you are leading a summer program in Phnom Penh with ten Trinity students.

Four the last three years you have been the Fellow of the Class of 1963. In this capacity, you followed in the footsteps of Jack Waggett and Scott Reynolds, to bring four brilliant ’63 Scholars’ into the first year class.

Your volunteer work includes serving on the board of directors locally and nationally. This service included a stint with Literacy Volunteers of Greater Hartford from 1995 to 2000. In this capacity, you were the editor-in-chief of a two-volume oral history of non-reading adults in Hartford. Grants you applied for subsidized this work and in 1995, you received the organization’s service award. You are currently the faculty representative to the National Alumni Association’s Executive Committee.

Mr. President, on the occasion of his 45th reunion, I am honored to recommend for the Alumni Medal for Excellence, a most accomplished alumnus, Michael E. Lestz, Class of 1968.”