Mead Lecture: “The Reinventions of Tradition: Writing Damascus in the Long 16th Century”

By SMM in Events, Lectures, Middle Eastern History on October 4, 2017. 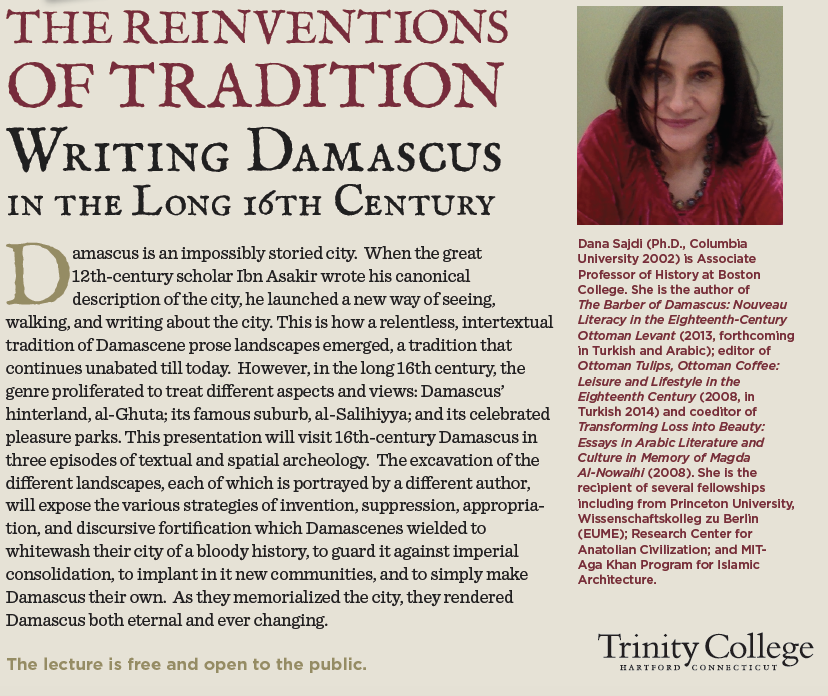 I found Professor Sadji’s lecture and work The Barber of Damascus to be very dense and informative. In her lecture, Professor Sadji examines the city of Damascus in the 17th century, which she proves to be a thriving cosmopolitan and a far cry from the war-torn city we know today. One of the five major cities in the Ottoman Empire and a provincial capital, Damascus was a display of the phenomenon she calls “exhibitionism” and was also a microcosm of the Empire as a whole, serving as the departure point for pilgrimages to Mecca. Her book, of which I read the Introduction and first two chapters, detailed the existence of a Damascene barber in the 17th century. His personal diary is fascinating because of the diversity of his interactions. Peasants, saints, commoners, and elites came to the shop and the barber’s account provides a refreshing change of voice in history. As Professor Sadji mentioned in her lecture, history is written by the victors, it is rare to see the oppressed have a voice. This is a theme that is often brought to light in our class, the National Party and its authoritarian control over the school system and the recording of history, subjected black South Africans and silenced their voice. Another interesting point in her book was that the barber viewed his society as a clash between the tyrannical rich and the oppressed poor. – Dan Marini, History, Class of 2018

This year’s Mead History Lecture was presented by professor Dana Sajdi on the use of histories and literature by several scholars from Damascus in the 15th and 16th centuries in defining their local narratives. Sajdi’s talk charted the history of Damascus from the Umayyad rule into the Mameluke period of the later middle ages and early modern period. Honing specifically on the major changes that happened on either end of that timeframe, such as the destruction of the Cathedral of St John the Baptist and construction of the mosque by the Umayyad, and eventually the cartographic attempts of the Mameluke Sultans to redefine the topographic appearance of the region. Sajdi discussed the ways in which these local and personal histories by scholars of the area were attempts to subvert the powers of the Sultanate and reject the attempts to dispossess local individuals from controlling their history. This was, in my view, a novel concept on the part of the scholars to resist a much more powerful authority in a very efficient way, as well as not being an area of history that I would have considered studying or even imagining existed in the first place. – James Seiler, History, Class of 2019

← The Return of Time Travel? The History of Elm Trees at Trinity →