I wrote this not as an assignment but for publication here after being inspired by the mention of this practice in my Parliamentary Debate class with Professor Jennifer Regan-Lefebvre. What started as a search for an answer became an exhilarating six-hour review through the annals of British parliamentary history. 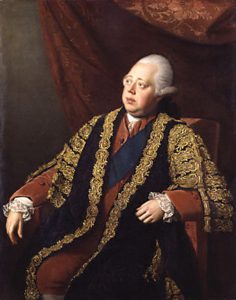 Lord North, the Prime Minister of Great Britain during much of the American Revolution and the notorious culprit of the removal of Ellis’ wig.

On the evening prior,[1] the question was posed in a general sitting of History 270: Parliamentary Debate, a course duly held under the tutelage of one Dr. Jennifer Regan-Lefebvre, a professor of British History, inter alia, at Trinity College, as to the ambiguity of the nature of Parliamentary tradition surrounding the “putting out of the wig,” as it is so-called in the Parliamentary tradition.[2] Ergo, it stood within my earnest desires and in keeping with the general station of my inquisitive character to endeavor to establish, through scholarly review and research, the history of this unique practice. It is my hope that the forthcoming may provide an answer to this most perplexing and under-researched historical oddity in Parliament.

Erskine details the “Rules of Debate” in the twelfth chapter of his work, emphasizing the importance of sitting and the manner of speaking, inter alia. His comments germane to a discussion of the “putting out of the wig” remain ambivalent in their assertiveness, however, he does devote a sentence to the question of making a “speech on a point of order,” of which a “point of interest” is a linear descendent. Imprimis:

“A member, however, who has already spoken, may rise and speak again upon a point of order or privilege, if he confines himself to that subject, and does not refer to the general tenour of the speech.”[4]

Erskine himself cites 140 C.J. 10, 293 and H.D. 3 s. 298 as sources for the aforementioned point. On this matter, Erskine is referring to two internal documents incidental to the House of Commons, which have eluded the best efforts of this historian in his attempts to requisition them. This notwithstanding, Erskine remains a frequently referenced source[5] in those studying the annals of Parliamentary history and, ergo, is a source whose veracity has been affirmed.

However, this leaves us no closer to an answer to a matter of historical consternation. As a corollary of popular opinion, the matter has been popularly addressed without historical background in certain guides to Parliament. One such recent document is a factsheet released by the House of Commons Information Office.[6] Herein, it is suggested that the practice of raising a point of order is derived from an unspecified Parliamentary incident of the eighteenth century wherein “one member’s sword impaled and removed another’s wig.” Therefore, suggests the factsheet, “it is now not permitted to carry arms of any kind into debate.” This, of course, is an erroneous statement in and of itself as the practice of carrying weapons excepting those of individuals in particular ceremonious roles was well established in the 14th century “Statuto sup’ Arportam’to Armor or Statutum de Defensione portandi Arma” (Statute forbidding Bearing of Armour).[7] Moreover, ambiguity exists surrounding a legal interpretation of which ceremonious positions directly qualify for exemption, as is evidenced in the narrative from the eighteenth century. 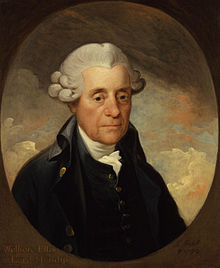 Welbore Ellis, as Treasurer of the Navy, had his wig knocked off by the Prime Minister.

Moreover, this factsheet makes the grave academic error of not explaining to the inquisitive individual the history of the “incident” or providing any source which can attest to its veracity. With some considerable discomposure, the answer was to be found in an obscure volume of historical memoirs produced for the popular press. In the third volume of Wraxwall’s Historical Memoirs,[8] the incident is laid out in considerable detail. For the edification and clarification of any historical dubiety that may remain, the story is reproduced unedited below:

“It can hardly obtain belief, that, in a full house of commons, he took off, on the point of his sword, the wig of Mr. Welbore Ellis, and carried it a considerable way across the floor, without ever suspecting or perceiving it. The fact happened in this manner. Mr. Ellis, who was then treasurer of the navy, and well advanced toward his seventieth year, always sat at the lowest corner of the treasury bench, a few feet removed from Lord North. The latter having occasion to go down the house, previously laid his hand on his sword, holding the chafe of the scabbard forward, nearly in a horizontal direction. Mr. Ellis stopping at the same instant that the first minister rose, the point of the scabbard came exactly in contact with the treasurer of the navy’s wig, which it completely took off, and bore away. The accident, however ludicrous, was wholly unseen by Lord North, who received the first intimation of it from the involuntary bursts of laughter it occasioned in every quarter of the house. Mr. Ellis, however, without altering a muscle of his countenance, and preserving the most perfect gravity in the midst of the general convulsion, having received back his wig, readjusted it to his head, and waited patiently till the house had recovered from the effect of so extraordinary as well as ridiculous an occurrence.”[9]

The aforementioned appears in the context of a reflection upon the obscured vision of Lord North and his inability to ascertain the particulars of certain situations as a corollary thereof.

However, being apprised to the importance of a multiplicity of sources towards the affirmation of confirming a story, additional surveys of historical literature were required to establish a true and pluralistic historical narrative which considers all aspects of the matter. An incident of similar description appears in, curiously enough, a review of the times of Jane Austen.[10] In this work, it is similarly presented that:

“Wigs were sometimes the cause of ludicrous incidents, as when in the House of Commons Lord North suddenly rising from his seat and going out bore off on the hilt of his sword the wig of Welbore Ellis who happened to be stooping forward.”[11]

Again, the incident is frequently referenced in earlier popular and seemingly public texts that were frequently printed for the pleasure of middle class lawyers, accountants, and clerks.[12] In another miscellany of the day, The Fireside Book,[13] reference is made to the popularity of the tale in the public sentiment

“Since the ludicrous circumstance of Lord North’s taking off Welbore Ellis’s wig on the chafe of his scabbard, no scene more comic had been acted within the walls of the house of commons.”[14]

Indeed, the history of this particular story appears to survive in a preponderance of written histories, with the last such appearing in 1916. In a work by H. Merian Allen in The Sewnee Review, aptly titled “Little Laughs in History,”[15] the incident is described in a manner commensurate with that of Wraxwall’s:

“One evening during the period of the American Revolution the House of Commons met for the sole purpose of renewing the frequent and acrimonious debates of the day upon Lord North’s policies as to these Western Colonies….On the Treasury Bench, which extended along a short half of the length of the main aisle, sat North himself, fat and near-sighted, and further down, at the lowest corner, was the dignified, elderly Welbore Ellis, Treasurer of the Navy, and afterwards Lord Mendip. As the discussion waxed hot, the Premier rose suddenly to go down the House to consult with a brother member, and, as he did so, laid his hand, with a quick nervous grasp, on his sword in such a way that the scabbard extended out nearly horizontally. Ellis leaned forward, in a bored position, as the first minister ambled ungracefully down the hall with his side-arm on a direct line with the former’s wig. Of course, away went the wig, and down the House went North, utterly unconscious of what he had done, blind as a bat, with the tonsorial dressing swaying to and fro on the end of his scabbard, like some strange kind of banner. The tension of the night was ended. The bursts of laughter from every quarter lasted long after Ellis, without altering a muscle of his countenance, had received back his very intimate property and readjusted it to his head.”[16]

Therefore, through multitudinous Victorian miscellanies,[17] the answer to the historic practice of “the putting out of the wig” is answered. Practically speaking, it remains the task of another historian to ascertain when the practice is first mentioned in the rules of debate and became popularized in that sphere. However, these shortcomings notwithstanding, as regards the origin of the story itself and its reason d’etre in modern parliamentary practice, it has been averred and evinced herein that the story of the venerable Lord North and the aging Welbore Ellis provides the answer to that fundamental question of so anomalous a Parliamentary tradition.[18]

[1] Before the author proceeds, he wishes to make the reader aware that he is fully aware of the ludicrous nature of devoting a considerable body of text to the study of so minute a point of Parliamentary history, particularly when he is finishing this at 1:30 in the morning. This notwithstanding, the author hopes that this treatise brings considerable jouissance to the professor so named and others in his class.

[2] See descriptions of the acceptance and use of this terminology in various outlines issued by the American Parliamentary Debate Association (APDA): http://novices.apdaweb.org/resources/.

[5] For accolades of Erskine’s work, one has to look no further than Parliament itself which has recognized that the book “has helped shape Westminster politics and been influential throughout the Commonwealth”: http://www.parliament.uk/about/living-heritage/evolutionofparliament/parliamentwork/offices-and-ceremonies/collections/erskine-may/erm-treatise/.

[6] House of Commons Information Office, “Factsheet G7—General Series: Some Traditions and Customs of the House,” August 2010, FS No. G7 Ed 3.4.

[12] Many of these popular texts are compendiums of short works and short essays which lack any cited author or contributor but, rather, are presented as a snapshot of various matters which may be of interest to those in the working classes. This was not an uncommon literary practice, see the work of Graham Law and Robert L. Patten in their survey “The Serial Revolution” in The Cambridge History of the Book for a more expansive exploration of the aforesaid topic.

[13] The Fireside Book: A Miscellany with a Plate of Abbotsford (Philadelphia: For the Trade, 1837).

[18] The author regrets that he was unable to attain records through Hansard or through the National Archives pursuant to the matter, as the lack of a date of the matter and the fact that said matter occurred before 1803 lends itself to both being absent in digital records and possibly lost entirely (as a corollary of the Great Fire of 1834, in which many journals and records were lost).

The Fireside Book: A Miscellany with a Plate of Abbotsford. Philadelphia: For the Trade, 1837.

House of Commons Information Office. “Factsheet G7—General Series: Some Traditions and Customs of the House. August 2010. FS No. G7 Ed 3.4.