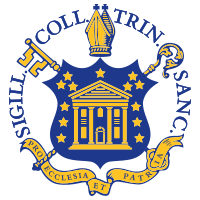 “Following World War II, President Funston encouraged reestablishment of the College’s academic pageantry, which had been curtailed during the war. Matriculation and the Book Ceremony for first-year students were both brought back, and, in the spring of 1950, Honors Day was added as a new ceremony. Honors Day was intended to be an occasion when all Trinity prizes and awards—with the exception of those given out at Commencement—could be celebrated in the presence of the entire College community.” Ten history student majors were awarded prizes for community service and academic scholarship. Congratulations to Virgilio Bissio, Erin Dorsey, Paige Durgin, Brooke Grasberger, Joseph Laws,, Michael McLean, Mixashawn Rozie, Francis Russo, Carolyn Taratko, and Adam Whitehurst.
List of Award Winners & Awards:

Carolyn Taratko ’12 – The George J. Mead Prize in History for Scholarship in Non-English Sources & The Miles A. Tuttle Prize