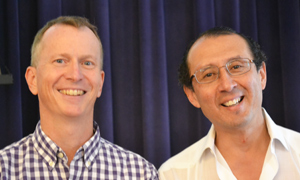 “Fueled by a desire to probe the connections between cities in this country and abroad, Trinity has launched a co-curricular initiative this academic year, “Cities: Global Urban Experience across Time & Space.” The lead professors are Dario A. Euraque, professor of history and international studies, and Garth Myers, Paul E. Raether Distinguished Professor of Urban International Studies. The half-credit course (COLL-131-01) is affiliated with 19 courses having urban themes. They include seven first-year seminars.

Additional courses will be offered in the spring 2013 semester, whose centerpiece will be a major symposium in April.Although the program — which builds on successful co-curricular initiatives that addressed “Decolonization” and “Border Crossings” in the late 1990s — has been in the planning stage for nearly a year, the details were unveiled during a well-attended Common Hour event Thursday. An orientation opportunity for students and faculty will be Wednesday, September 12 from noon to 1 p.m. at the Center for Urban and Global Studies (CUGS), 70 Vernon Street.

According to Euraque and Myers, the initiative will “facilitate broad and connected teaching and learning on the formation and growth of cities in the ancient and pre-industrial past, as well as the more contemporary urbanization and cityscapes.” In addition to the linkages with regular courses, the program will includes a series of scholarly films, informal meetings and opportunities for engagement with Hartford.”