Bankwitz Lecture: “From Privy to the Statistical Archive” 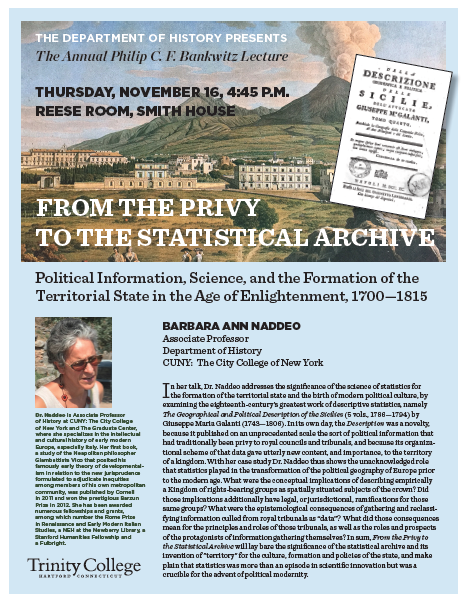 The annual C.F. Bankwitz Lecture this year featured Barbara Ann Naddeo from the City College of New York presenting “From the Privy to the Statistical Archive: Political Information, Science, and the Formation of the Territorial State in the Age of Enlightenment, 1700—1815.”

Herein, I examine Professor Naddeo’s arguments regarding Galanti’s significance in his time whereas my colleague Ms. Meagher will touch upon Galanti’s role as a source of historical information.

Naddeo’s treatment of the implications and novelty of famed Italian economist and geographer Giuseppe Maria Galanti (1743–1806), who worked in the Kingdom of Naples during the aforementioned period, proved enlightening especially in its espousal of concepts on epistemology.

Naddeo focused particularly on Galanti’s unprecedented publication, published in five volumes from 1786-1794, titled The Geographical and Political Description of the Sicilies. This publication came to be one of the earliest times wherein information that had heretofore been privileged only to the Crown’s minister and the courts were shared with the general populace. Indeed, Naddeo argued that this was a fundamental shift in the treatment of information and also emphasized the ramifications of such information within the public sphere.

At the time, Galanti’s work was a remarkable feat not only in its publication but in its collection of information. Galanti painstakingly contacted and made deals with regional administrators and local officials. Bartering for information with provincial regents, Galanti formed extensive networks of communication between many provinces and formed a sophisticated means of exchange long before the introduction of a reliable postal service.

Indeed, Naddeo stressed that “Galanti was dependent on a network of individuals in his search for the archive,” a fact which is substantial in understanding how a single publication radically came to redefine our understanding of the nation-state. This network itself was radical in that it brought into contact Galanti, an Enlightenment economist, with the simple farmer and the administrator throughout the Kingdom.

Further, the impact of Galanti’s work in the time period is reflected in Galanti’s own efforts to redress the issues of socioeconomic and cultural disparities within Naples. The concern of Galanti with ameliorating such conditions is reflective of a unique Enlightenment ideal and also of his own concern with defining and studying the regions of his homeland.

Naddeo, in her study of a single work, brilliantly studied the ramifications of an individual text on our understanding of communication, informational exchange, and the expansion of public knowledge on the Kingdom of Naples. Further, Naddeo offers us a means whereby we can consider the role of the Enlightenment and its predication—from the epistemological perspective—on the discourse of class differences in society.

← Bankwitz Lecture: Galanti as a Historical Source The Parliamentary Practice of the “Putting Out of the Wig” →