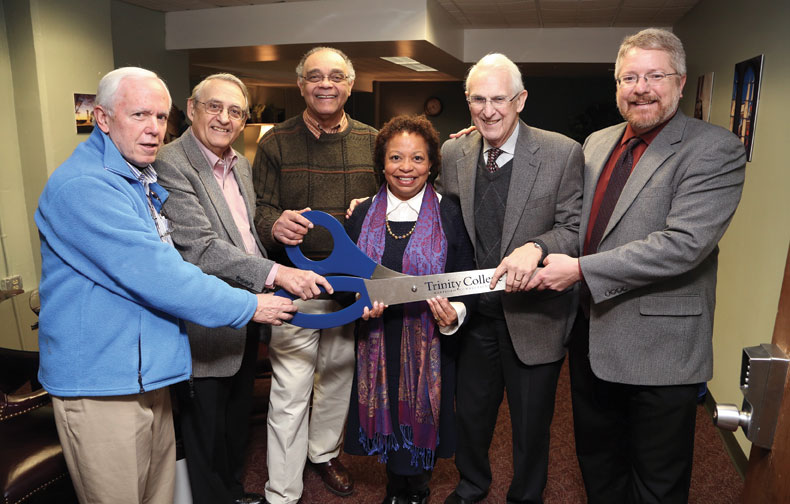 Trinity acknowledged the lifelong relationship between faculty and the College with the opening in January of the Retired Faculty Lounge in Mather Hall.

“I can’t tell you how happy I am to have this space here,” said Tom Mitzel, dean of the faculty, shortly before the lounge’s ribbon cutting, which was attended by approximately 40 retired faculty members. After a meeting with Borden W. Painter, Jr. ’58, H’95, professor of history, emeritus, and a former president and dean of the faculty, Mitzel worked with a group of current faculty members and retirees to establish and open the space.

The lounge’s location in the basement of Mather Hall, a hub for student life on campus, is no coincidence. Joanne Berger-Sweeney, President and Trinity College Professor of Neuroscience, encouraged the retired faculty members to stay in touch with Trinity students and to involve themselves in the forthcoming mentoring networks. With the lounge now open, Mitzel said he anticipates announcements about programming with retired faculty members soon.

“This is a small but visible symbol of how much we want you to remain connected to the community,” Berger-Sweeney said in addressing retired faculty members.

This June marks the retirement of nine Trinity faculty members, listed below.

W. Miller Brown, Professor of Philosophy
Miller Brown graduated from Amherst College in 1958 and spent the following year in Paris as a Rotary Fellow. He received a certificat d’etudes superieures from the University of Paris in 1959. In 1970, he received his Ph.D. in philosophy from Harvard University. Prior to coming to Trinity in 1965, he was a lecturer in French at Boston University and a teaching fellow in general education (natural sciences) at Harvard. From January 1999 to July 2004, he was Trinity’s dean of the faculty, the College’s chief academic officer.

Cynthia L. Butos, Principal Lecturer in the Allan K. Smith Center for Writing and Rhetoric
Cindy Butos received her B.S. in secondary education and English in 1971 from Millersville University of Pennsylvania, where she also did graduate work in English and education. She earned her M.A. in English at Trinity in 1988, the same year she became a visiting lecturer at Trinity. She has had several roles in the center, including serving as the assistant director from 1990 to 1997, first-year writing coordinator in 2006-2007, and coordinator of writing studios from 2010 to 2013. Other activities include serving on the Academic Affairs Committee for 10 years, acting as a faculty liaison for Trinity’s football team since 2007, and mentoring New York Posse 8.

Judy Dworin ’70, Professor of Theater and Dance
Judy Dworin ’70, the first woman to graduate from Trinity, established the Trinity Dance Program, co-founded Trinity/La MaMa Performing Arts Semester in New York City, and chaired the Department of Theater and Dance for many years. Dworin, who earned her B.A. in American studies at Trinity and her M.A. in dance and education at Goddard College, focuses her work on multidisciplinary performance and residency outreaches to underserved populations. Since 2005, she has developed a comprehensive outreach to those affected by incarceration through her arts nonprofit, the Judy Dworin Performance Project, which she established in 1989. Dworin’s teaching and performance is foundationally informed by the process of improvisation and collaboration.

David E. Henderson, Professor of Chemistry
David Henderson obtained his B.A. in chemistry from St. Andrews Presbyterian College in North Carolina in 1968. After earning his Ph.D. at the University of Massachusetts Amherst in analytical chemistry in 1975 and completing a three-year postdoctoral there studying oil shale, he joined the Trinity faculty in 1977. His 35-plus scholarly publications involve applications of chromatography and mass spectrometry to food antioxidants from plants, metal analysis, biochemical analysis, environmental analysis, and the study of mummies. He founded Trinity’s Interdisciplinary Science Program and served as the first director of the Environmental Science Program. He is active in the Reacting to the Past pedagogy and has developed several books for using Reacting to the Past in science, environmental policy, and religion courses.

Drew A. Hyland, Charles A. Dana Professor of Philosophy
Drew A. Hyland came to Trinity in 1967 after having begun his teaching career at the University of Toronto in 1964. He is now the Charles A. Dana Professor of Philosophy. He received his A.B. from Princeton University in 1961 and his M.A. and Ph.D. from The Pennsylvania State University in 1963 and 1965, respectively. He also has taught graduate courses at Boston University and the New School for Social Research. His scholarly and teaching interests include Ancient Greek philosophy, 19th and 20th century continental philosophy, philosophy of sport, and philosophy of art. He is the author of numerous articles and books in the areas of his research.

Paul Lauter, Allan K. and Gwendolyn Miles Smith Professor of English
Paul Lauter joined the Trinity faculty in 1988 and has served as English Department chair and as director of the graduate program in American studies. He received his B.A. from New York University in 1953, his M.A. from Indiana University in 1955, and his Ph.D. from Yale University in 1958. He was one of the founders of The Feminist Press and is general editor of the groundbreaking Heath Anthology of American Literature. He served as president of the American Studies Association and won the ASA’s Bode-Pearson Prize for lifetime achievement in American studies. His books include Canons and Contexts and From Walden Pond to Jurassic Park.

William M. Mace, Professor of Psychology
William Mace received his B.A. in psychology from Yale University in 1967. He went on to earn his Ph.D. in child psychology from the University of Minnesota in 1971 and joined the Trinity faculty that same year. He specializes in ecological psychology, the investigation of how people and animals successfully see, hear, touch, taste, and smell the world. Both the scientific journal Ecological Psychology, founded in 1989, and the scientific organization the International Society for Ecological Psychology, founded in 1981, were started at Trinity; Mace has been editor of the journal and executive director of the society from the beginning.

Richard S. Ross, College Librarian and Professor
Richard S. Ross received his B.A. and M.A. from Northeastern University, his M.L.S. from Simmons College, and his Ph.D. from Boston College. In 2000, he came to Trinity and oversaw the construction of the Raether Library and Information Technology Center and later the renovation of the Watkinson Library and the library’s expanded 24-hour zone. He taught in Trinity’s First-Year Program from 2005 to 2012. He is the author of the forthcoming book Contagion in Prussia 1831, The Cholera Epidemic and the Threat of the Polish Uprising. Before arriving at Trinity, he was an assistant university librarian at Georgetown University, the University of New Hampshire, the University of Massachusetts Lowell, and Northeastern.

Robin L. Sheppard, M’76, Professor of Physical Education and Associate Director of Athletics
Robin Sheppard earned her B.S. in health and physical education from Trenton State College (now The College of New Jersey) in 1974. She went on to receive her M.A. in education from Trinity in 1976, and she has been a fixture in the College’s athletic community ever since. Prior to her full-time administrative duties, Sheppard coached the field hockey and lacrosse teams through 25 successful seasons. She enjoyed her leadership role in one of the most competitive Division III athletic conferences in the country, remaining confident that students can achieve excellence in both athletics and academics if they are committed to discipline and time management.