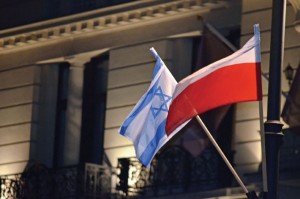 Looking out the windows of the Hotel Bristol in Warsaw, where she was listening to her husband,  Trinity Professor Samuel Kassow ’66, give a talk last fall, Lisa Kassow saw a sight that took her breath away. On lampposts around the city, the blue and white flag of Israel flew with the red and white flag of Poland, snapping together in the October breeze.

The conjoined flags, notes Lisa Kassow, director of the Zachs Hillel House at Trinity, spoke volumes about what was happening in Warsaw that week: a celebration of the revival of Jewish life in Poland, symbolized most forcefully by the official opening of the POLIN Museum of the History of Polish Jews.

“Who could have predicted,” she says, “that 70 years after the virtual destruction of Polish Jewry, we would see this day in Poland?”

More than two decades in the making, the museum is built on the site of what was once the heart of Jewish Warsaw – the area that the Nazis turned into the Warsaw Ghetto. The core exhibit galleries showcase a millennium of Jewish life in Poland and immerse visitors in the world of Polish Jews. The eight galleries begin with “First Encounters (960-1500)” and end with “Postwar Years (1944 to the present).” Rather than being filled with artifacts, the galleries contain interactive, multimedia narratives and reconstructions of homes and businesses, as well as artwork, photos, and the stuff of everyday life. The centerpiece exhibition is a replica of the 17th century Gwozdziec Synagogue. 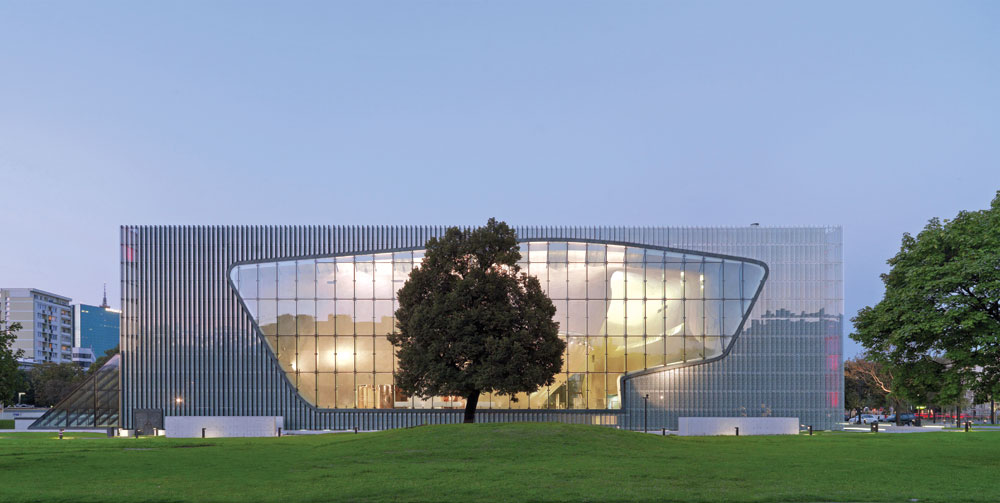 Among the scholars who helped shape these exhibits is Samuel Kassow, Charles H. Northam Professor of History at Trinity. Traveling numerous times to Poland, Sam Kassow served as lead historian for two of the eight galleries: “Encounters with Modernity (1772-1914)” and “On the Jewish Street (1918-1939),” covering the period between the two world wars, his particular area of expertise.

Sam Kassow is an internationally recognized scholar of Russian and Soviet history, modern European history, and the history of Ashkenazi Jewry. He lectures worldwide and has dozens of articles, scholarly presentations, and public talks to his credit. He has written or edited five books, with a sixth due out this year.

A film based on his 2007 book, Who Will Write Our History?, is currently in production. In that book, Sam Kassow, who himself grew up in a family of Holocaust survivors, tells the story of historian Emanuel Ringelblum, who led a secret group of 60 Jews in the Warsaw Ghetto to chronicle the lives of the hundreds of thousands facing starvation, disease, and deportation. Just before the ghetto was destroyed by the Nazis in 1943, the group buried thousands of documents in milk cans and tin boxes, determined that, even if they did not survive, the world would hear their voices and know what went on in that place during the war years. Of the 60 chroniclers, only three survived the war.

A STORY FILLED WITH LIFE

As important as such a story is, Sam Kassow says, what is equally important is to remember that, for centuries, Poland was the center of Jewish life in Europe and the cultural hub of the Jewish people. As Hanna Gronkiewicz-Waltz, mayor of Warsaw, noted in the museum’s catalog, “How difficult it (would be) to separate what is Jewish from what is Polish … so deeply have our fates intersected.” 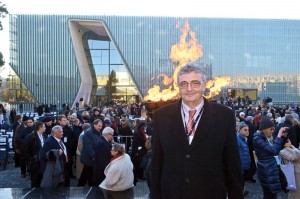 That message of interconnectedness is encoded in the museum’s name, which is based on a legend: that when Jews fled western Europe in medieval times to find a safer haven, they were urged to settle in this eastern land by angels who carved the Hebrew letters “pol-in” – meaning “rest here” – onto tree trunks in the forest.

In the earlier part of the 20th century, one-fifth of world Jewry lived in Poland, and Jews made up 10 percent of Poland’s population. Today, more than half the world’s Jews can trace their ancestry to Poland. “One of the great mistakes in understanding the history of Polish Jewry,” Sam Kassow says, “is to see it only by looking backwards through the Holocaust. That view gives a distorted impression of how people understood their lives in their own times.”

So how does a museum present, as its catalog says, “a thousand years of Jewish presence on Polish soil”? Doing so was a challenge, Sam Kassow acknowledges, with the academics, the exhibit designers, the curators, and Barbara Kirshenblatt-Gimblett – the leader of the exhibit development team – in constant dialogue. “How would we present Zionism? Yiddish literature? Jewish socialism? The Hasidic movement? Daily life? As a historian, I am accustomed to writing and expressing nuances and qualifications: on one hand this, on the other hand that. Designing a museum exhibit was an entirely new experience.” 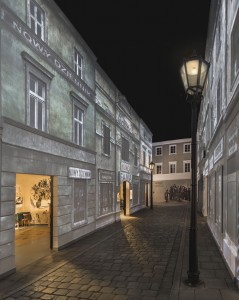 The POLIN Museum’s “On the Jewish Street (1918-1939)” gallery covers the period between the two world wars, a particular area of expertise for Samuel Kassow ’66, Charles H. Northam Professor of History. Photo by M. Starowieyska, D. Golik/POLIN Museum of the History of Polish Jews

Sam Kassow says that he had to think about how to use visual media and conceptual spaces rather than relying primarily on words – and to be willing to get rid of 99 percent of the material in order to keep the 1 percent that would create the most compelling narratives for the vastly different audiences that the museum attracts. The idea is for visitors to experience each era as did those living through it. He is particularly proud of his idea to build the narrative of the late 19th century and early 20th century around a railway station, conveying the life of the period through the stories of the ticket buyers.

In addition to the galleries, the museum has a major educational component, with staff that presents mini-courses in Jewish history, gives talks to visitors and students, and sponsors training for Polish teachers. The message, says Lisa Kassow, is that “interest in contemporary Jewish engagement and renewal in Poland is profound.”

A group of Trinity students experienced this spirit of renewal on a Hillel trip to Poland in March 2014. Guided by Sam and Lisa Kassow, they visited the Auschwitz Jewish Center – dedicated to public education about prewar life, the Holocaust, and the dangers of xenophobia and anti-Semitism – and conducted a memorial service near the ruins of the Birkenau gas chambers. But they also visited a busy Jewish day school, orthodox and progressive congregations, and a lively Jewish community center in Warsaw. They learned that university degrees are available in Jewish studies. They met young Jews who, Lisa Kassow says, “are consciously choosing their identity – learning about their collective history, culture, religion, values, and beliefs, identifying as contemporary Jews who are inspired to maintain their links to a Jewish past and to build a vibrant future.” 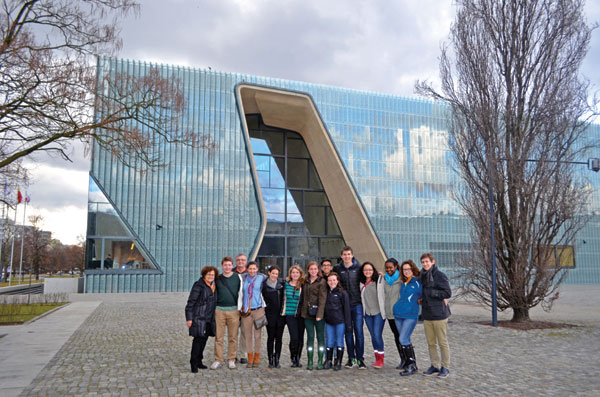 Sam Kassow ’66, third from left, and Lisa Kassow, left, gather with Trinity students at the POLIN Museum as part of a Hillel trip to Poland in 2014.

The trip was supported by the Polish Adam Mickiewicz Institute and the Taube Center for the Renewal of Jewish Life in Poland Foundation, an initiative of the Taube Foundation for Jewish Life & Culture – also a key supporter of the museum – whose executive director is Shana Penn ’77. “Polish Jewish heritage tours that do not center exclusively on anti-Semitism and the Holocaust,” Penn says, “can encourage people to discard their stereotypes when given the opportunities to do so in a country that has been confronting its own prejudices and misconceptions.”

A few months after the Hillel trip, Lisa and Sam Kassow were back in Warsaw for the festivities surrounding the museum’s grand opening. “We knew we were witnessing history,” Lisa Kassow says. Sam Kassow adds, “While we were all there to celebrate a remarkable institution, we were also fulfilling the moral obligation to remember not only how Jews died, but how they lived.” 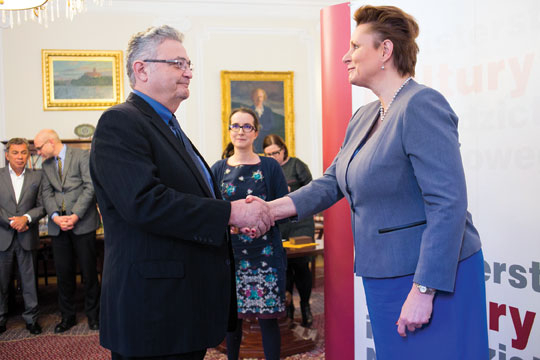 Sam Kassow ’66 returned again to Warsaw in mid-February of this year, this time for a ceremony in which he was presented with the Zasluzony dla Kultury Polskiej – an Order of Merit for Contribution to Polish Culture. The medal, given by the Polish Minister of Culture, recognizes the significance of his scholarship on Polish Jewry and his central role in the development and creation of the POLIN Museum.

The award, Kassow says, has deep personal meaning for him. “In my research, writing, and teaching, I have tried to honor the memory of the millions of Jews, including my grandparents, uncles, aunts, and cousins who lived in Poland and who were murdered there. This award is an acknowledgement of the meaning of their lives and says that, in some important way, I have succeeded in ensuring that those lives are remembered.”