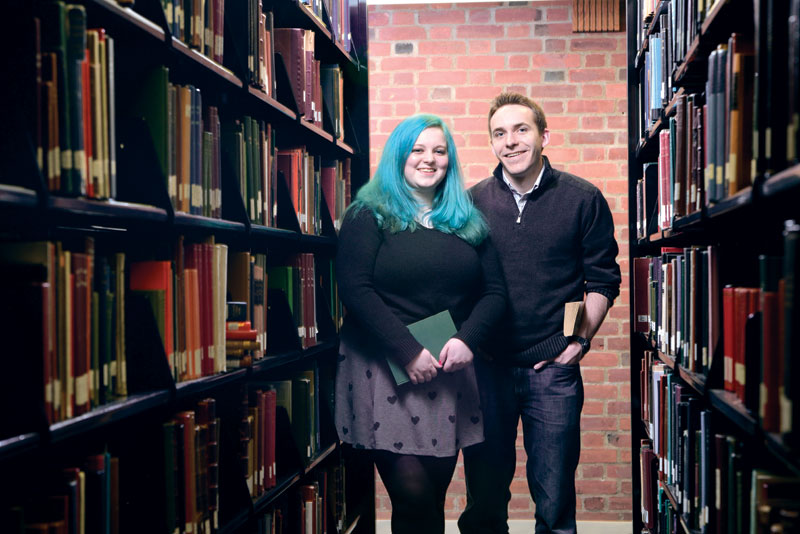 Walk into a bookstore a few years from now, and you may see novels by Georgia Summers ’15 and David Field ’15. If you do, you can take pride in knowing each sprang from seeds planted at Trinity. Both Field and Summers are seniors in the College’s Creative Writing Program who have opted to write novels for their senior theses.

Field and Summers have much in common. Both English majors, the two served as co-editors of the College’s literary magazine, Slate, now renamed The Spine. They also share a thesis adviser: Assistant Professor of English Ethan Rutherford.

“I had David and Georgia for ‘Senior Seminar’ last fall, when they were both working on early stages of these books,” explains Rutherford, who joined the Trinity faculty last fall. “They both applied to write senior theses, and because I was familiar with their projects, it made sense for me to advise them.”

The similarities don’t end there. “Both are writing broadly in the fantasy genre,” he continues, “and both of their projects, to some degree, are geared to a young adult audience. Georgia and David are terrific writers. Their imaginations are vivid: they’re skilled at inventing worlds and putting their characters into fantastic scenarios. I know they also both have a number of other novels tucked in drawers,” he notes. “And both participated in NaNoWriMo.”

Short for National Novel Writing Month, NaNoWriMo is an online undertaking that challenges participants to write a 50,000-word manuscript over 30 days. Now 16 years old, the event has produced more than 250 traditionally published novels, including bestsellers such as Sara Gruen’s Water for Elephants and Erin Morgenstern’s The Night Circus.

Field and Summers are no newcomers to NaNoWriMo; both report they’ve participated for years. They also share long-standing aspirations to be novelists.

“I developed this whole career ladder when I was 8,” explains Summers, a native of London, England. “Writing a novel is something I’ve always wanted to do.” Summers counts The Night Circus as her “very favorite book. I’d love to write something similar to that,” she confesses.

Aspiring authors-to-be find their home in Trinity’s vibrant and robust Creative Writing Program. A concentration within the English Department, the program has a dedicated faculty of five who teach classes in fiction, poetry, and creative nonfiction, as well as oversee thesis projects. The faculty members – Ciaran Berry, Lucy Ferriss, Francisco Goldman, Clare Rossini, and Ethan Rutherford – are all published authors or poets.

Each year, the English Department sponsors a number of events that bring noted authors and poets to campus to share their works with the Trinity community. Poet David Wojahn was the Hugh Odgen Poet-in-Residence this past spring; Wojahn spent a week on campus meeting with students and presenting a series of lectures. Through the Allan K. Smith Reading Series, which brings in several writers each semester, Sinéad Morrissey, the poet laureate of Belfast, Northern Ireland, visited campus in the spring; National Book Award finalist Jim Shepard ’78 is scheduled to speak in the fall.

One of the program’s most coveted awards is the South Beach Writing Residency, offered by the family of Hyam Plutzik ’32 and officially presented at Honors Day for the top senior creative writing thesis. It was announced in late April that David Field ’15 had won the 2015 prize, marking the second year of the award that the Plutzik family has committed to offering for five years. The prize includes a one-week writing retreat in Florida.

“In first through fifth grade, I wrote a book each year that was between 40 and 60 pages,” says Field, who is from Franklin, Massachusetts. As he entered middle school, those books gradually increased in length. Field remembers loving the Goosebumps series, eventually growing into Harry Potter before discovering Stephen King.

The two each worked on versions of their thesis project for the 2014 NaNoWriMo, what Rutherford calls “a good start.” 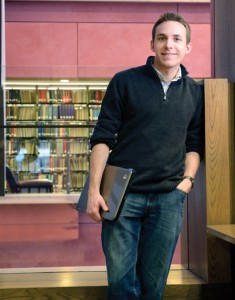 Field, a Henry F. MacLean Memorial Scholar, classifies his novel-in-the-works as an “urban fantasy.” Called Suburban Train, “it’s a modern-day reinterpretation of Dante’s Inferno,” he explains. “It’s about a young guy with a mentally ill mother and a girlfriend who dies in a tragic accident. He runs away from home and ends up on the wrong train, which takes him to the capital of hell. There, he has to grapple with loss, death, and guilt over the things he’s done.”

Field says he was inspired by taking a class on the Divine Comedy (which includes the Inferno) in addition to “Remixing Literature.” “That course had us retelling old stories in new ways,” he says. “Both cemented my interest in what I’m doing now.” 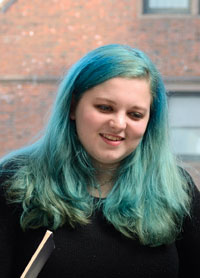 Summers’ novel, The Assistant, is “a fantasy, but not in a Lord of the Rings kind of way. It’s more whimsical,” she says. “It’s about a reclusive magician who’s trapped in his house. When he loses his assistant to an unfortunate accident, he ends up hiring two assistants – which is unheard of – essentially pitting them against each other. It’s about each of the characters working through their own problems, which gives you insight into how they’ve come to be the people they are.”

Summers, who has moved around a lot, found herself drawn to probing the sedentary life. “My mom’s Trinidadian; my dad is British,” she explains. “Besides the U.K., my family has lived in Colombia, in Russia, and briefly in Switzerland. I wanted to explore what it means to stay in one place for your whole life and what that does to a person’s relationships.”

The fact that Summers and Field are writing novels is unusual. And, according to Assistant Professor of English and Director of the Creative Writing Program Ciaran Berry, it makes them standouts in a small field. “The senior thesis is open only to seniors with either an A- average in the major or who submit a successful petition. This year, only six students are writing theses,” he explains. Two are working on short story collections; one is writing a novella; another, a piece of creative nonfiction. Though those longer-form projects are more typical, Berry is happy to encourage these budding novelists. “I think it’s great. They’re two very talented students, and they’ve been geared up to do this for a while.”

Summers and Field, in turn, praise the English Department faculty as mentors and role models. “Creative Writing has professors who are passionate about writing and invested in the individual successes of their students,” says Field. “That’s one of the main factors that drew me to Trinity.” All of the Creative Writing faculty are, in fact, published authors. They are Francisco Goldman, a novelist and journalist; novelist Lucy Ferriss; Rutherford, who recently published a short story collection, The Peripatetic Coffin; as well as poets Clare Rossini and Berry. 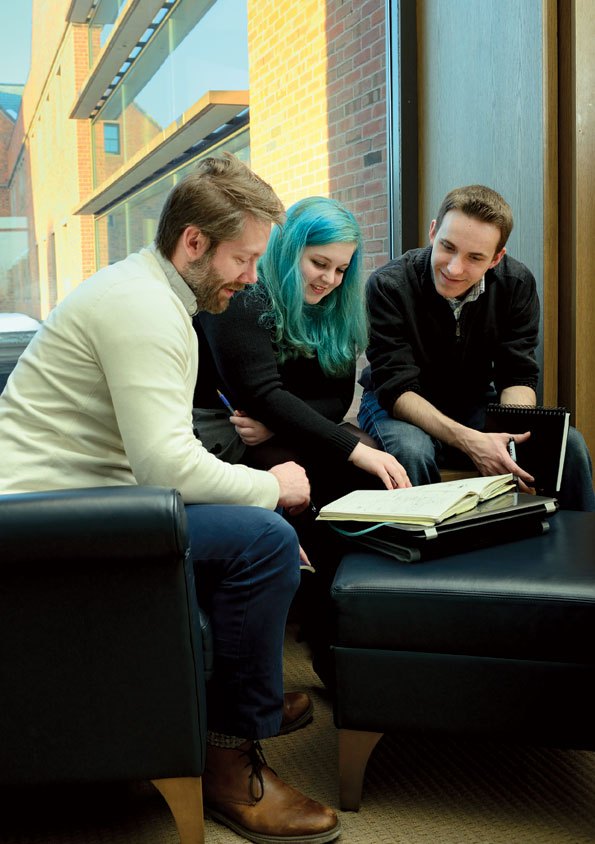 My professors have been so interested and encouraging,” adds Summers. “Professor Rutherford in particular has been very supportive. It’s so nice to have someone who is interested not just in the thesis requirements, but in what I want to do as well.”

For his part, Rutherford says, “Georgia and David have always wanted to write novels – so this is their chance. This thesis project gives them permission to prioritize their own work and see how that feels.” Early in the semester, “They’re already well into writing. We’ve set up a schedule to meet weekly and workshop what they’ve written. They’re excited, and it’s exciting to see that kind of work ethic in them.”

Rutherford predicts Summers and Field will finish the semester with solid first drafts. “Who knows what will happen with these projects?” he muses. “They may well become published. That would be a dream. It doesn’t always happen. They’re approaching their projects very seriously, but they’re realistic.”

Rutherford is currently working on a novel himself. “It’s not going to be done by May, unfortunately,” he says. “But as I keep telling Georgia and David, writing is a process. To show up every day, keep a schedule, be consistent – that’s something to be proud of.”