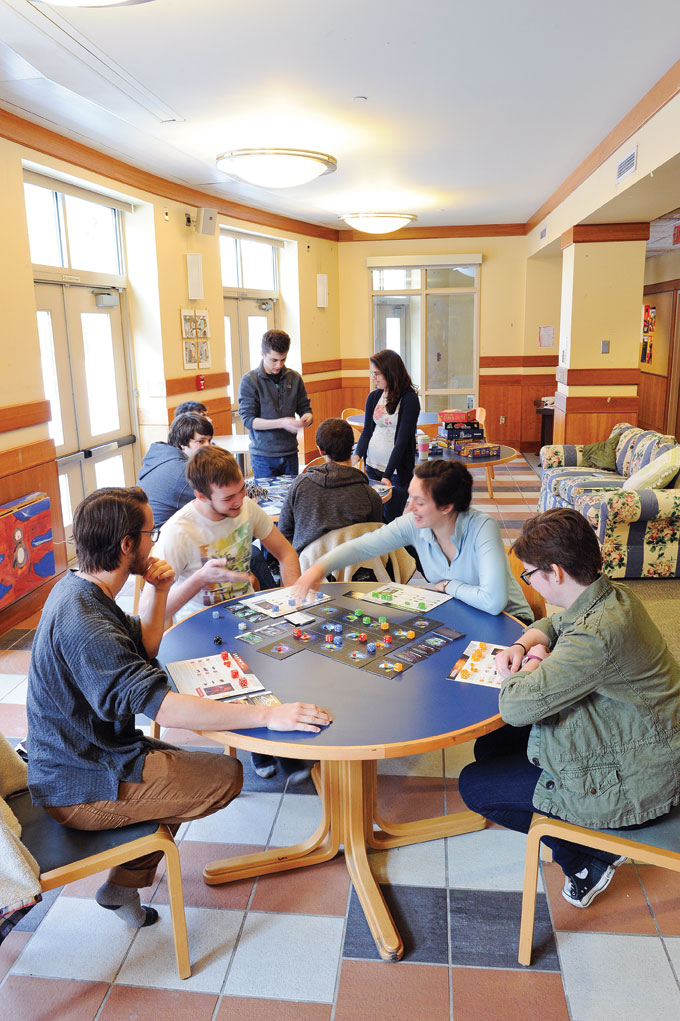 Residents of The Fred take part in the Gaming Group on a recent Friday afternoon.
Photo by Richard Bergen

It is Friday afternoon at The Fred. Like all Trinity students, the students who live in this residence hall are unwinding after a demanding week of classes. But they also are preparing to turn each of their five floors into a different movie or film genre, filled with related games and activities, so that when attendees of this week’s Friday at The Fred event drift in at 9:00, they are transported to the worlds of Star Wars, The Wizard of Oz, a spy flick, a horror film, or an action movie. Officially titled The Fred Pfeil Community Project, The Fred is the tallest of the three Summit Suites buildings in the southwest corner of campus. It houses 60 upper-year students who apply to live there based on a desire to be part of an inclusive, friendly, and engaged atmosphere. The Fred, founded in the fall of 2006, was named in honor of Fred Pfeil, a Trinity professor of English and film studies from 1985 until his death in 2005. Pfeil was known for inspiring students with his lifelong commitment to justice, political engagement, and social change. The community also hosts weekly gatherings that are open to all Trinity students, including meetings of the Gourmet Pancake Club, the Crafternoons group, and the Comic Book and General Nerdology group, to name just a few. Ethel and Max Schader Memorial Scholar Allison Stegeland ’15, who serves as a community facilitator in The Fred’s internal democratic government, said that The Fred is a “doors open” kind of place. “At the end of the day,” she says, “The Fred is a building of 60 people trying to make campus just a little bit friendlier.”