New program to support Class of 2019

The 60 students – split into five teams – who took part in the mentoring networks design challenge presented their plans to a panel of eight judges on Sunday, March 8, one of the first warm days of 2015. By the evening, the students, standing shoulder-to-shoulder in President Joanne Berger-Sweeney’s residence, were aching to hear which of the teams had taken first place in a competition to redesign the experiences of Trinity first-years through a new system of mentoring networks.

Berger-Sweeney stood at a lectern to announce the winner. “As we make the final design, we will use parts of all the proposals,” she told the crowd. Then, “the overall best design: Group 4, the ‘Bantam Network!’ ”

The Bantam Network’s core idea is to bring together students from four thematically different first-year seminars into residentially based groups called nests. These nests, named for persons, places, or things tied to Trinity’s history, will foster scholastic engagement outside the classroom, a greater sense of community within the living spaces, civic engagement with Hartford, and school pride. 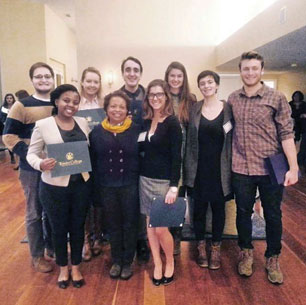 “We tried to harken back to Trinity history and tradition,” said Madison Ochs ’18, a member of the winning team. “We’re proud to have won and to be able to have a hand in this. I’ll be able to see my legacy being implemented while I am here at Trinity.”

Charged last December with designing mentoring networks that would strengthen the interaction of Trinity students with each other, the campus, and the city of Hartford, the five design teams met frequently since the start of the spring semester. The teams, each supported by presidential cabinet sponsors, worked toward designs that would offer concrete plans for programming, space, and governance; engage existing campus resources; have a compelling name to describe it; and achieve the project’s four goals.

Associate Professor of Biology Lisa-Anne Foster, one of the judges, said of the Bantam Network, “I like how the proposal integrated the academic and the social.” New York restaurateur Danny Meyer ’80, also a judge, said, “I liked the connection to Hartford.”

According to the Bantam Network plan, the main support for each nest will come from a close-knit team of academic and residential mentors, who will set an example of cooperation and leadership for their students. A new central space on campus will support the plan’s goals of integrating academic, social, and professional life at Trinity.

As the initial design phase comes to a close, the College turns its efforts to implementing the students’ ambitious plans. When the members of the Class of 2019 arrive on campus in September, they will be supported by those who know best what it takes to successfully engage with the Trinity and Hartford communities.