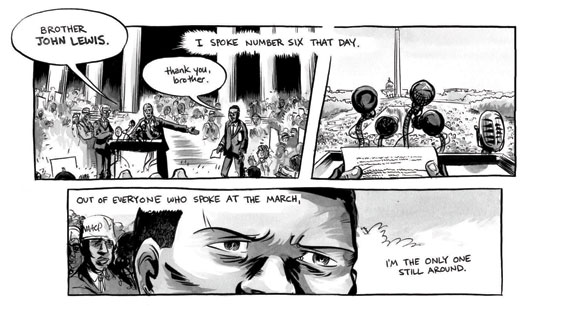 His second graphic novel, March: Book Two, is just out to stellar reviews, including The Washington Post calling it a “must-read monument.” His first book, March: Book One, topped best-seller lists of The New York Times and The Washington Post. And life is all “a bit surreal” for Andrew Aydin ’06. “It’s become my new normal,” says the author about the attention his work has received. 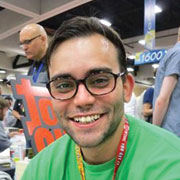 Aydin is digital director and policy adviser to U.S. Representative John Lewis of Georgia, a figure who was a cornerstone of the civil rights movement and the architect of and a keynote speaker at the historic 1963 March on Washington. The two, along with artist Nate Powell, have created a trilogy – a third book will be out next year – that chronicles Lewis’s lifelong struggle for civil and human rights. And they have taken the publishing world by storm.

“In some ways, I am not surprised by the success,” says Aydin. “The congressman’s story is compelling and very relevant today.” March: Book One focuses on Lewis’s childhood in rural Alabama, his life-changing meeting with Dr. Martin Luther King, Jr., and the birth of the Nashville Student Movement that broke down barriers through nonviolent lunch-counter sit-ins in the segregated South.

What does surprise Aydin is how fervently the mainstream audience has embraced the book. “It’s not just graphic novel fans who are reading it,” he says. In addition to topping best-seller lists, March: Book One was named one of the best books of 2013 by the Boston Globe, USA Today, The Washington Post, Publishers Weekly, and Kirkus Reviews, among others. It received a 2014 Robert F. Kennedy Book Award and a 2014 Coretta Scott King Book Award. 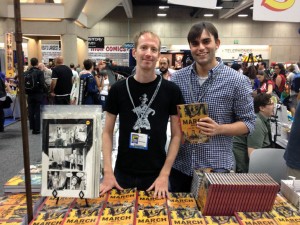 The making of the March series has its roots in the late 1950s, when an 18-year-old Lewis encountered a comic book that would change his life and inspire him to work for change through nonviolence. The book was Martin Luther King and the Montgomery Story, published in 1957 by the Fellowship of Reconciliation. “It sold for 10 cents, and it was 14 pages long,” recalls Lewis.

Fifty years later, Lewis mentioned the book to Aydin. A comic book fan from childhood, Aydin began researching the history of Martin Luther King and the Montgomery Story, including its many translations that inspired activists in South Africa, Uruguay, Vietnam, and other countries. The book inspired his subsequent master’s thesis, “The Comic Book That Changed the World.”

It also gave him an idea: “I suggested the congressman write his own comic book.” Lewis politely declined, but Aydin didn’t let the idea go. “Finally he said he’d do it, but only if I’d write it with him.” Aydin agreed. “This was the greatest gift I could give to a man who has given his country so much,” he told a Houston audience in February.

Lewis is grateful for Aydin’s persistence. “Andrew had a vision to embrace the philosophy of peace and nonviolence in this book,” says Lewis. “And he wouldn’t let it go.” 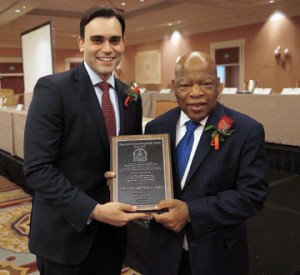 The respect these two men have for each other is obvious. “He’s been my congressman since I was 3 years old,” says Aydin, an Atlanta native. “He’s an unbelievable human being; one we should all strive to emulate.” Lewis says he’s “more than blessed” to have Aydin in his life. “He’s smart and gifted, a jack of all trades.”

The two have worked together since 2007, when Aydin took a job answering the congressman’s mail in his Washington, D.C., office. Their strong bond was forged when Aydin served as press secretary for Lewis’s 2008 and 2010 re-election campaigns. “Working with someone on a campaign is a bit like being in the trenches,” says Aydin.

When asked if he worried about doing justice to his subject during the writing of March, Aydin laughs. “Constantly. The congressman is a legend, a titan in the history of our country.”

Though Aydin had written speeches and radio ads, “and the usual things for school,” the trilogy was his first venture into storytelling. “It’s a different animal,” he says. “But you learn the pacing and the rhythm through reading.” And Aydin has a lot of experience reading comics. “I’m a nerd,” he says. “I got into comics as soon as I could read.” 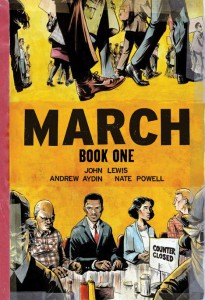 A workhorse, Aydin penned March while simultaneously finishing his master’s degree in public policy at Georgetown University and working full time at the House of Representatives. “I like to keep intellectually engaged,” he says. A political science and film studies major at Trinity, he impressed his professors and administrators at the College with that same drive.

Former Lieutenant Governor of Connecticut Kevin Sullivan ’71, who taught Aydin in his media and public policy class at Trinity, describes him as “incredibly motivated.” Aydin interned in Sullivan’s office and later became his special assistant. “You knew he was someone who was going someplace,” says Sullivan.

“Andrew had a way of saying something controversial without offending anyone,” adds TJ Barber, who was associate director of operations and judicial affairs at Trinity and worked with Aydin on the Student Government Association. “That’s a real skill.” 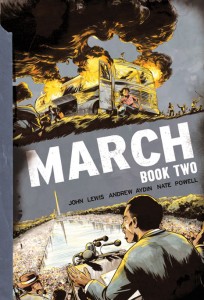 Of his college years, Aydin says, “I made a lot of mistakes, learned a lot of lessons, and tried a lot of different things.” Besides student government, he was involved with crew and helped resurrect the College’s television station, TrinTV. At Trinity, he also participated in his first act of civil disobedience. “We had a sit-in at the library to persuade the College to increase hours during exams,” he says.

A scholarship student, Aydin is grateful for the assistance he received. “I’m proof that supporting financial aid makes a difference. You can open up a world for a student and give them a whole new life.”

Looking forward, Aydin is open to possibilities. “You can have all the plans in the world, but in the end you’ve got to follow what feels right.” And what feels right to him now is to promote the principles of the March trilogy. 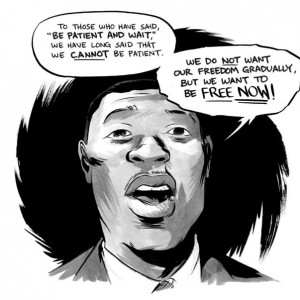 Artwork from March: Book Two of John Lewis speaking at the 1963 March on Washington.

“If we do this right … we really might be able to teach this generation how to use civil disobedience in the most effective way,” he told Entertainment Weekly in January. “And they might actually be able to bring about some serious change.”