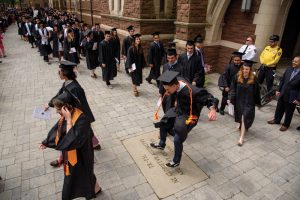 “We must protect freedom of speech. Let people speak their minds, but then do not hesitate to criticize them for spreading falsehoods,” philosopher, writer, and cognitive scientist Daniel C. Dennett said to the 615 graduates at Trinity College’s 191st Commencement on Sunday, May 21.

Dennett, co-director of Tufts University’s Center for Cognitive Studies, as well as University Professor and Austin B. Fletcher Professor of Philosophy at Tufts, spoke to Trinity’s largest graduating class ever, with 581 undergraduates. Thirty-four graduate students also received their master’s degrees. 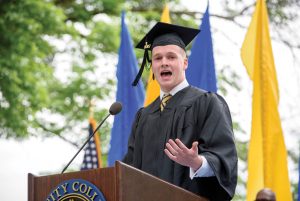 Douglas Barrett Curtin, chosen as the Class of 2017 student speaker, talked about how the simple act of saying hello to someone can lead to life-changing interactions. “I said hello to a homeless man outside my internship one day. That man, Jake, ended up inspiring me to start a Food Recovery Network chapter at Trinity, which has led to more than 4,000 pounds of food being donated from Mather Dining Hall [to McKinney Shelter in Hartford],” said Curtin, a double major in political science and educational studies from Wayland, Massachusetts. 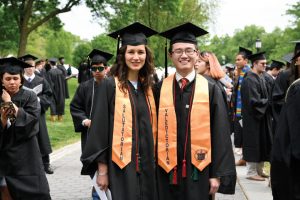 Trinity College President Joanne Berger-Sweeney said in her charge to the graduates, “Your education is not only good for you, it is for the good of society. My charge to you, in turn, is not only to use your good Trinity education, but to go out and show the world what it means to do — and to be — Trinity good.”

To see additional pictures, view the photo gallery on Flickr.