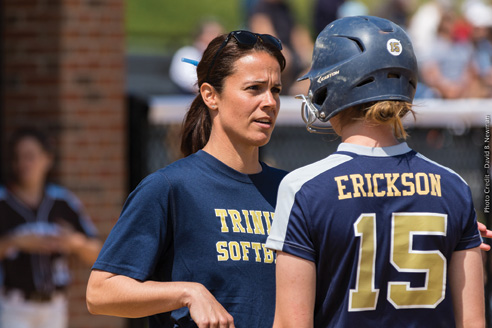 Trinity’s softball team posted a 19–15 overall record and tied Tufts for second place in the NESCAC East with an 8–4 mark against division opponents. Trinity qualified for the NESCAC Championship Tournament for the seventh time and the second year in a row but fell 3–2 in nine innings to Williams at Bowdoin and 9–3 to Bowdoin at Colby in the team’s two postseason games. Bantam Head Coach Caitlin Hitchcock ’00, in her 15th season, repeated as the NESCAC Coach of the Year, while four Bantams were named to the All-NESCAC Team. First-year pitcher Lindsay Golia represented Trinity on the All-NESCAC First Team, while junior captain Michelle Treglia, who plays second base; sophomore shortstop Courtney Erickson; and sophomore catcher Nicole Towner graced the All-NESCAC Second Team.