The Trinity College women’s lacrosse team, coached by Katy Dissinger in her third season, posted a 17–5 overall record and finished tied with Colby, Hamilton, and Middlebury for first place in the New England Small College Athletic Conference (NESCAC) with an 8–2 record in the league. The Bantams qualified for the NESCAC Championship Tournament for the 13th time and the 11th year in a row, downing Tufts 19–10 in the opening round and Hamilton 12–3 in the semifinals at Middlebury before falling in the league finals against Colby at Middlebury 13–9. Trinity was selected for the NCAA Division III Championship Tournament for the 13th time and the eighth consecutive spring, downing Babson 16–5, Franklin & Marshall 13–12, and York (Pennsylvania) 10–5 to reach the NCAA Final Four for the sixth consecutive spring before falling 8–4 against eventual champion Gettysburg in the semifinals at Roanoke College’s Kerr Stadium. 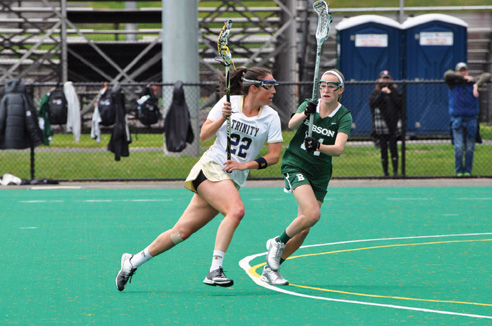