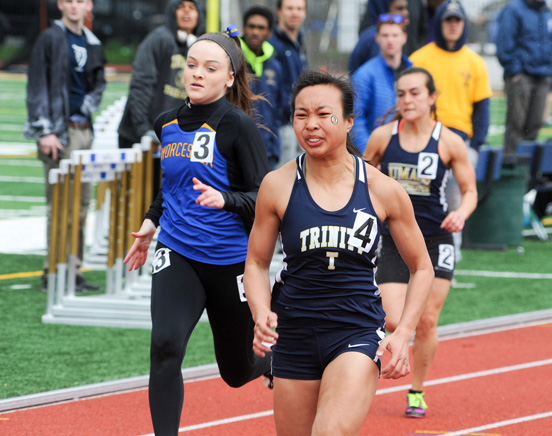 Trinity’s women’s outdoor track and field team, coached by George Suitor in his 25th season, finished a best-ever seventh in the NESCAC Championship Meet at Bowdoin College, tied for 13th in the New England Division III Championships at Williams College, and tied for 28th in the New England Open Championships at Williams. Bantam first-year Katie Marlow-Benedick was third in the 100- and 200-meter dashes, and fellow rookie Peace Kabari added a second-place heave of 40’07” in the shot put, as both were named to the All-NESCAC Team. Marlow-Benedick continued her success, placing fourth in the 200-meter dash and seventh in the 100-meter sprint to earn All-New England honors in both events. Sophomore Anna Barnes also turned in an All-New England performance with a 4:37.33 finals time in the 1,500-meter run, while the 4×100-meter relay team of Marlow-Benedick, senior captain Katie Tonyai, sophomore Morgan Hallow, and first-year Katie Lazur finished fifth, exactly one second behind the top foursome, to earn All-New England honors. Kabari continued her impressive campaign with a fourth-place finish in the shot put to give Trinity five All-New England Division III honorees. She added a sixth-place performance in the New England Open with a College-record-breaking toss of 43’04.25″, and the same four Bantam relay runners also collected All-New England Open recognition for their eighth-place effort in the 4×100-meter race.