The Most Extraordinary Tooth On The Planet

Martin Nweeia ’77 seeks to solve the mystery of the narwhal 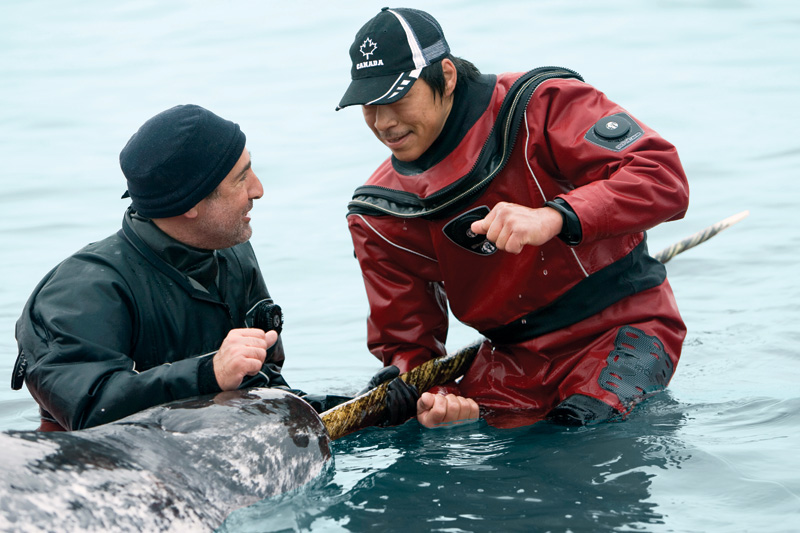 With a nine-foot, spiraling tusk jutting out from the front of its head, the narwhal looks like a sea creature from a fantasy world. As scientists studied the elusive whale, they discovered that the tusk is a massive tooth, which is what brings Martin Nweeia ’77 — a practicing dentist, marine mammal biologist, lecturer at the Harvard School of Dental Medicine, and clinical assistant professor at Case Western Reserve University School of Dental Medicine — to the icy waters of the Arctic Ocean to conduct research. 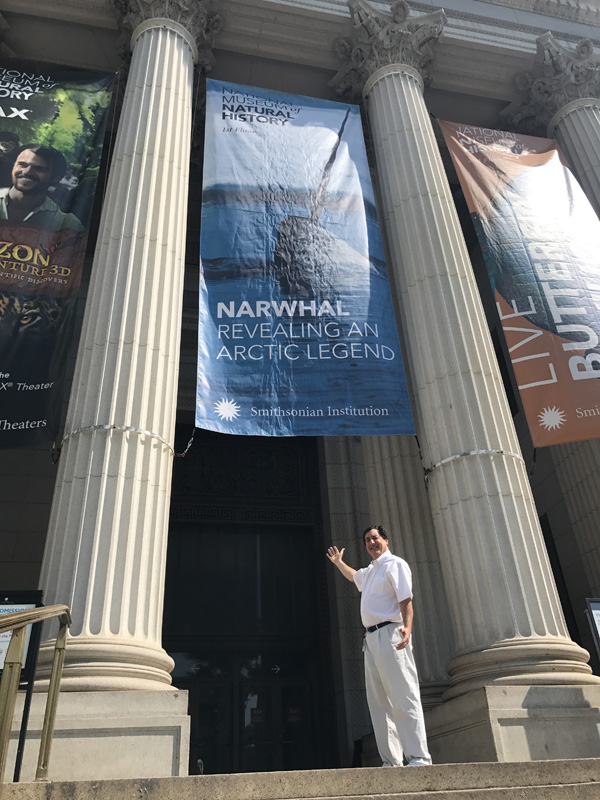 Martin Nweeia, D.D.S., ’77 stands on the steps of the Smithsonian’s Museum of Natural History and points to the center banner, which touts the narwhal exhibit. Photo by Pamela Peeters

Nweeia graduated from Trinity College with majors in biology and English before attending dental school at Case Western Reserve. Now a member of the Vertebrate Zoology Department of the Smithsonian’s National Museum of Natural History (NMNH) and a research scientist with the National Science Foundation, he also is part of a team behind the Narwhal: Revealing an Arctic Legend exhibit at the NMNH that opened in August and runs for two years. The exhibit showcases Inuit perspectives on their connections to the narwhals and offers the most up-to-date scientific information about the animals.

Please check back soon for information about a special alumni tour of Narwhal: Revealing an Arctic Legend, an exhibit at the Smithsonian’s National Museum of Natural History. The tour, which will be led by Martin Nweeia ’77 and will be followed by a reception and Q&A, is being planned for early 2018.
______________________________

Nweeia says that most of his work has been in the “field of dental anthropology, studying the migrations of people and disease based on teeth and looking for unusual examples in nature, such as elephants, walrus, and warthogs.” He was attracted to his current research with questions raised by the narwhal tooth, which seems to defy all evolutionary reason. “Much of the explanation didn’t make intuitive sense to me. I was inquisitive initially, and the more I read, the more perplexed I was,” he says. “It’s more fun as a scientist to look at the examples that don’t make sense.” That curiosity was enough to propel him to ask “What on earth is this marine mammal doing with this mythical tusk?”

“There’s no question that this animal has the most extraordinary tooth on the planet,” Nweeia says. “There’s more to this story that I felt needed to be told.”

The narwhal has captured the imagination of explorers, artists, and scientists alike. “A large percentage of the population doesn’t even realize these animals are on the planet, let alone that they wield this extraordinary tooth,” Nweeia says. Research has shown that the whale has the ability to form 12 other teeth that it genetically silences, leaving no teeth inside its mouth. 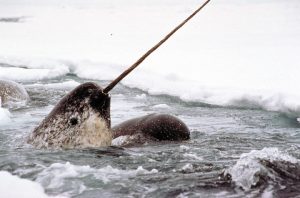 A narwhal pops through a spring ice lead near the High Arctic’s Baffin Island, Nunavut Canada. Photo by Glenn Williams

The animal’s distinctive “tusk” is likely a canine tooth, Nweeia says. “It’s a sensory organ — we have very definitive scientific evidence for that. The findings teach us much about the evolution of teeth and the adaptation, in this case, of a sensory organ system,” he says. “People don’t think about teeth as sensory organs, and yet the evolutionary origin of teeth really comes from sensory organs that were able to detect particle gradients in the water, temperature, and pressure. Our own teeth have that ability, but we have relegated more of the function now in our teeth to be primarily for chewing and biting because of where we are on the evolutionary scale.”

The narwhal tooth also is unusual in other ways. “We found that it is built very differently from other teeth. Our own teeth have a hard coating of enamel on the outside and are softer in the center, while in the narwhal it’s the exact opposite: soft and flexible on the outside, but the inside is like a steel shaft,” Nweeia says.

Conducting research on these animals, which live in the near-freezing Arctic water, presents its challenges. “The work is treasured because people know how difficult it is,” Nweeia says. “The environment is completely unpredictable, and the seasons are becoming blurred in ways that are difficult to predict. There’s a very narrow window of time in the first two weeks of August when we try to work. You get there by helicopter, Twin Otter plane, or boat, and the weather doesn’t always cooperate. If something goes wrong, no one’s coming to get you.” 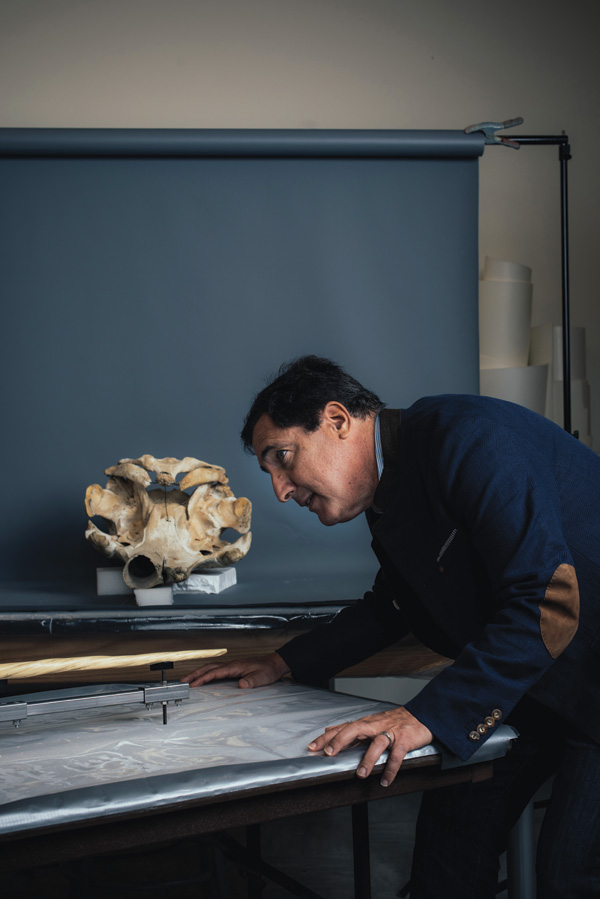 Nweeia examines a narwhal tusk and skull at the Smithsonian’s National Museum of Natural History before it is placed in a new exhibit, which opened in August. Photo by Stephen Voss

It may be a long way from Hartford to the Arctic Circle, but Nweeia says that he still carries the influence of his Trinity education with him. “I think Trinity was instrumental in shaping my brain and my approach to science. [Charles A. Dana Professor of Biology] Craig Schneider taught me to think in an integrative and an intuitive way, as opposed to one based on memorization of ideas and facts. In a final exam question — which I remember to this day — he said that a bat in the Amazon jungle was able to pollinate a certain kind of flower, and he wanted us to explain why this would occur. It’s that kind of question that makes you think beyond your own perimeter, and that’s what all the fundamental advances in science will be based on.”

Schneider says that Nweeia was the type of student who valued knowledge over grades. “Rather than judging himself on pluses and minuses, he judged himself on what he learned,” Schneider says of Nweeia. “He was curious, and he had a self-confidence that all of my students should have about their abilities. Curious people lead interesting lives.”

Nweeia’s inquisitive nature has helped him win numerous honors, including a National Geographic Explorer grant and a Fulbright. He also recently learned that he will be among those receiving a 2017 Lowell Thomas Award — given in recognition of extraordinary contributions to exploration and scientific research — from The Explorers Club, an international professional society.

Nweeia says he was happy to have the opportunity to give back to the Trinity community when he was invited to deliver a Science for the Greater Good lecture last year. “The thing that allowed me to become an expert in a specific field of study was seeded and nurtured at Trinity. Professors are really trying to open up minds,” he says.

Trinity’s Interdisciplinary Science Center (ISC), along with partners in Advancement and Career Development, sponsors the Science for the Greater Good lecture series, which aims to bring prominent Trinity science alumni back to campus to talk about their work and to mentor students. Alison Draper, director of the ISC, says that she is fascinated with how Nweeia pursues his scientific inquiry while also maintaining a dental practice in Sharon, Connecticut. “Dr. Nweeia is a great example of someone whose career hasn’t limited his curiosity,” Draper says. 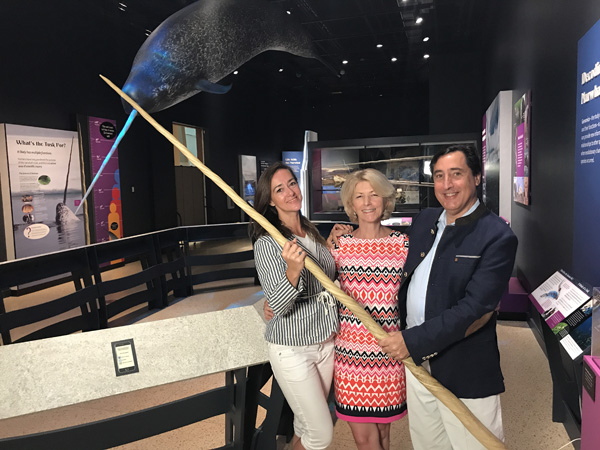 By speaking directly to students, Draper says, Nweeia helped to illustrate the advantages of a liberal arts education to those who wish to pursue careers in the sciences. “A scientist like Dr. Nweeia who is broadly educated and has learned to ask critical questions is a better scientist for that liberal arts foundation,” she says. “Dr. Nweeia, particularly, has incorporated much of what he learned in anthropology courses to further his research by recognizing the cultural knowledge among Arctic peoples about the narwhal.”

Nweeia points out that he learns as much from indigenous cultures as he does from his research. As he strives to answer questions about why the narwhal has evolved in its peculiar way, interviewing Inuit elders and hunters all over the planet has helped to expand his philosophical world view. “The thing I find most uniform is that indigenous people do not care about why things are the way they are. Their understanding of the planet is to work with it, not to say ‘Why is it?’ ”

Experiences like these reinforce Nweeia’s approach to science, which combines biology with anthropology and other fields. “Biological questions cannot be answered only by biologists,” he says. “In the world of science, the real insight, the real progress, the findings of significance are going to be found by integrative thinkers who wander freely between the perimeters of myriad disciplines.”