Construction is well under way at 10 Constitution Plaza, where the College plans to open, by December 2017, the first of its two Constitution Plaza spaces. In doing so, Trinity will join a growing presence of higher education institutions with students, faculty, and staff who have become part of the central business district community, helping Hartford evolve into a true “college town.” 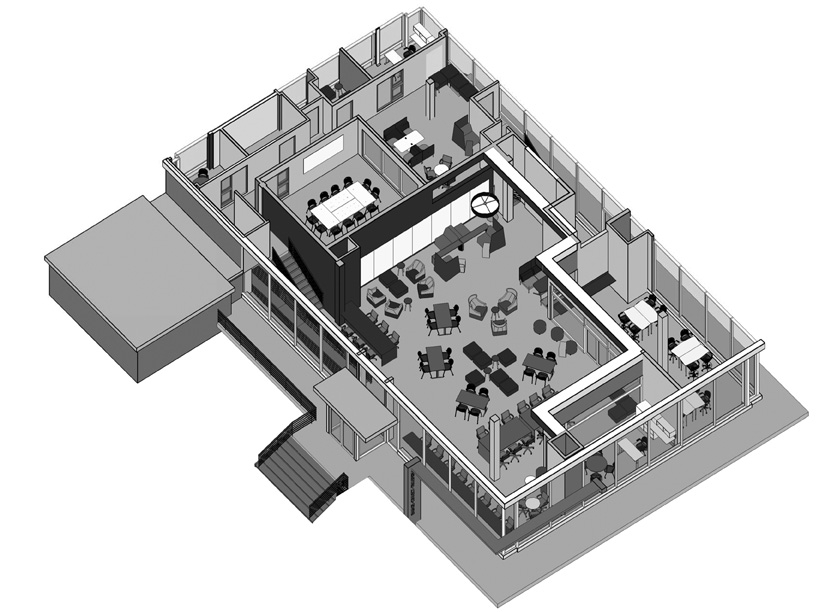 A signature program for 10 Constitution Plaza, a freestanding, low-rise building, will be the Liberal Arts Action Lab (LAAL), which will bring together faculty and students from Trinity and Capital Community College to collaborate in researching and addressing local challenges, using a liberal arts lens to solve real-world problems. An LAAL Programming/Planning Committee, chaired by Trinity Dean of the Faculty and Vice President for Academic Affairs Tim Cresswell, has been working concurrently with the Constitution Plaza Planning Committee to develop a program that will mobilize liberal arts-based skills and knowledge about Hartford to drive social innovation and deepen civic engagement.

Describing how the LAAL will work, Cresswell said, “At the outset, there will be 10 Trinity students and 10 Capital Community College students, broken up into groups of the appropriate size for the specific problems to be addressed. The students will receive academic credit, and it’s possible they’ll work within themes — for example, we might look at the social determinants of health in the city.”

Cresswell said that LAAL teams will partner with neighborhood organizations, city government, small businesses, faculty members already engaged in community research, and others to define and prioritize the challenges to be tackled. A guiding principle will be that true civic engagement means recognizing that the LAAL teams and community partners possess a range of skills, knowledge, and expertise; by working together, they will greatly enhance opportunities to address significant concerns.

Cresswell noted that Capital Community College is an ideal partner for this project. Since its move to Main Street in 2002, Capital has steadily increased its footprint in Hartford through a variety of programs, including social work service-0learning projects, nursing and health career clinical placements in hospitals, and business apprenticeships with area corporations.

Professor of Educational Studies Jack Dougherty was named the inaugural faculty director of the LAAL. Megan Brown, the full-time director of the LAAL, began in August, joining Trinity from the University of Washington, where she has undertaken a doctorate in geography.

Space at 10 Constitution Plaza also will serve as a base for Trinity students engaged in internships downtown and may be used during the orientation program for J-Starts, a new cohort of incoming first-year students who will begin their Trinity studies in January.

The establishment of a campus in downtown Hartford has been a Trinity goal for several years. A significant step came in 2014, when the College purchased 200 Constitution Plaza, the former Travelers Education Center, for $2.1 million. As Trinity began developing plans for the building — which would have meant becoming a landlord since the building had more square footage than Trinity could use — the College received offers from potential buyers. In 2016, Trinity struck a deal with LHR Group and BHN Properties to sell 200 Constitution Plaza and to lease about 21,000 square feet at 10 and One Constitution Plaza.