In a ceremony formalizing the relationship between the Ayer Neuroscience Institute at Hartford Hospital and the Neuroscience Program at Trinity College, officials from the College and Hartford HealthCare signed an agreement in May 2017 that will create far-reaching opportunities for up to 20 Trinity students a year interested in conducting research in neuroscience.

Under its terms, Trinity students interested in a vast number of the institute’s specialties — including strokes, Parkinson’s disease, epilepsy, movement disorders, neuropsychiatry, neurointervention, neurosurgery, and headaches — will be linked with physicians and researchers within those fields who are interested in working with Trinity students. 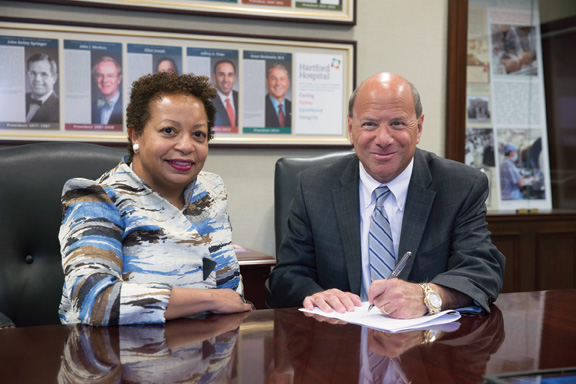 “The exciting thing about the institute is that it is the multidisciplinary approach needed to break down existing silos to make sure we have the resources to take proper care of patients,” said Mark Alberts, M.D., physician-in-chief of Hartford HealthCare’s Ayer Neuroscience Institute and chief of Hartford Hospital’s Department of Neurology.

Alberts and fellow neuroscientist Joanne Berger-Sweeney, president and Trinity College professor of neuroscience, agreed that an exciting facet of the collaboration is that Trinity will be able to integrate with Hartford HealthCare from a research perspective.

“Because we’re a liberal arts institution, we look for interesting connections,” said Berger-Sweeney. She pointed out that Trinity has implemented a five-year B.A./M.A. program in which one can earn a bachelor’s degree and with a fifth year earn a master’s degree in neuroscience by conducting research.

“On a national level, we cannot find enough good grads to go into the neurosciences,” said Alberts. “There is a shortage of bright, young minds to do this … the need is huge because a lot of the diseases we treat are diseases of an aging population. With the baby boomers getting older, we need these young minds to provide care and to be on the next frontier of research. [Trinity’s] B.A./M.A. program is a fantastic idea.”

Sarah A. Raskin, professor of psychology and neuroscience at Trinity, said the College has researchers who are productive and who have published in conjunction with researchers from Hartford Hospital and the Institute of Living.

“We have 15 faculty members in the Neuroscience Program, including a neurochemist and a neurobiologist, people doing clinical work, an engineer, and a philosopher who is doing research on consciousness — a wide range of faculty members. We have tremendous neuroscience students who are bright, engaged, and active, some of whom started doing research in their first or second semester at Trinity. Many of them wind up doing research at Hartford Hospital because it’s only three blocks from our College campus,” Raskin said, adding that Trinity’s Neuroscience Program, which celebrated its 25th anniversary last year, is one of the oldest such programs in the country.

“Trinity is stimulating young minds to go into neuroscience,” said Berger-Sweeney. Of the collaboration, she added, “We want this to be the start of a very strong partnership that we can continue.”