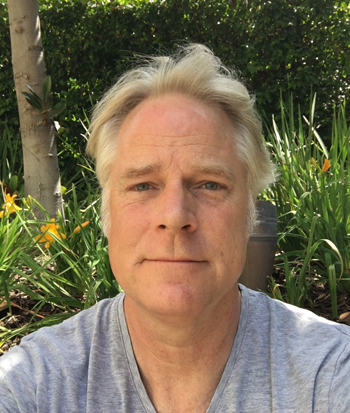 DEGREES: B.A. in political science with a concentration in political theory; B.F.A. in illustration/fine art at Art Center College of Design in Pasadena, California

FAVORITE TRINITY MEMORY: Playing Ultimate Frisbee on the quad, cowboy at the Hall, cooking dinners at DKE, going to lectures, talking and arguing with friends and faculty

How did you get involved in animation?
My first job out of Trinity was working at a large Los Angeles law firm. I did deposition digesting and case organization, worked 300-hour months. I realized pretty quickly that I didn’t want to go to law school and become an attorney. I went to Art Center College of Design four nights a week for a year while working, then enrolled full time and got a B.F.A. in illustration/fine art, the closest thing to a traditional painting education. The galleries at the time were only showing abstract or conceptual art, so after I graduated, I taught art to kids, then worked as a colorist in comics. We were some of the first people painting with Photoshop on the computer. I worked as a trainee at a small animation studio that made commercials for about a year and a half. Then I heard about an open slot for a painter at Disney. The show was being painted with Photoshop on computers. I did a test painting and was hired and stayed there for almost a decade.

What do you do during a typical day of work?
Drink black coffee and use Photoshop to paint on a Cintiq with a pressure-sensitive pen. I read scripts, storyboards, and/or watch black and white animatics (the soundtrack synced to the storyboards). Sometimes I work straight from rough storyboards (as on The Ricky Gervais Show), but usually I work from layouts (line drawings of environments) and create finished paintings in the appropriate style for the show. Some shows are fully painted, some are flat colors with black lines, some are realistic, others are highly graphic and stylized. Currently I’m working on Wabbit at Warner Bros., and once or twice a week we’ll have a pitch of the latest episode where the show has been drawn out on Post-it notes stuck to the wall. Matt Craig [an actor and producer] will read through the episode (doing all the voices). On Fridays, we’ll watch four of the finished episodes during lunch. I also teach a couple of nights a week.

What are your favorite aspects of your work?
Playing with color and texture to create mood and atmosphere. Storytelling. Watching scenes come to life.

What was your favorite animation project?
I don’t have a favorite. I find something to like about each one. Wabbit has been fun. I’ve had a free hand with the style. I’ve worked with a lot of extremely talented people, which is always a pleasure. The Ricky Gervais Show, The Simpsons Movie, and the various projects with Alan Bodner were all great fun (development on Kim Possible, The Life and Times of Juniper Lee, and The Looney Tunes Show).

How did your time at Trinity help prepare you for what you do now?
It didn’t, but I’m not sure that’s the point. My life has been enriched by a deeper understanding of literature, philosophy, history, economics, and political theory. Maybe I only use it when thinking or reading or writing or talking to friends or in online discussions. That’s OK. A good classical education is excellent fodder for seeing the humor in the world.

Was there a professor who was particularly influential?
Probably Rex Neaverson and his sharp analytical perspective on law and the institutions of western civilization, though I still regularly think about things I learned from Walker Connor, Howard DeLong, Albert Gastmann, Sam Kassow, and many others.

What was the most memorable course you took at Trinity?
Probably Walker Connor’s course on the question of ethno-nationalism in Marxist-Leninist theory and practice when he predicted the reunification of Germany and precisely outlined many of the factors that have shaped the world for the last 30 years.

To see a selection of Manson’s work, visit www.ashby-manson.squarespace.com.