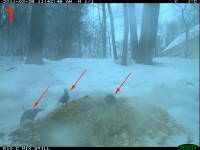 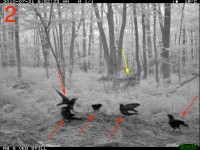 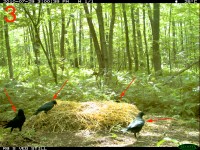 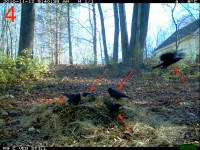 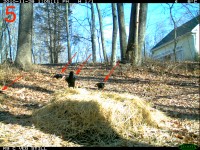 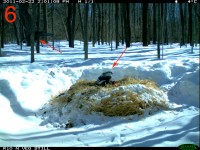 1 ­– On pile (three).  [Three crows:  the foggy conditions make this a challenging image.  Their black plumage and legs are diagnostic of the crows.  The low-lying, dark object on pile surface between middle and right-hand crow is not a partially visible crow, but inanimate material as revealed by its constant position (i.e., lack of movement) in the images surrounding this focal image.]

2 ­– On pile (five crows – red arrows); plus one red-shouldered hawk (yellow arrow) in flight directly above pile.  [Five crows: the challenge here is to realize that the hawk is not a sixth crow.  The crows display their diagnostic black plumage in this grayscale image, while the somewhat larger hawk has lighter colored plumage. Subsequent images show an alighted, more clearly defined hawk.]

3 ­– In front of pile (two), on pile (one) in back of pile (one).  [Four crows: the further bird is almost entirely hidden by pile material.   Comparison with adjacent images reveals that this black object directly behind the pile is indeed a crow.  Diagnostic black plumage and legs.]

4 – On pile (four), in flight (one). [Five crows: Individual behind pile is somewhat obscured.    Diagnostic black plumage and legs.]

5 – On pile (one), in vicinity of pile (three).  [Four crows: The crow standing on the pile itself was judged to have its wing arched upward.  It was therefore interpreted as a single individual and not one bird on pile partially obscuring the view of another bird directly behind it in the background.   Note the tail feathers and wing tip of the bird on the left frame edge could be easily missed.  Diagnostic black plumage.]

6 – On pile (one) and in flight (one). [Two crows: The bird in flight is somewhat difficult to see.  Again, comparison with adjacent images is helpful for detecting cryptic moving objects, such as this flying crow. Diagnostic black plumage.]